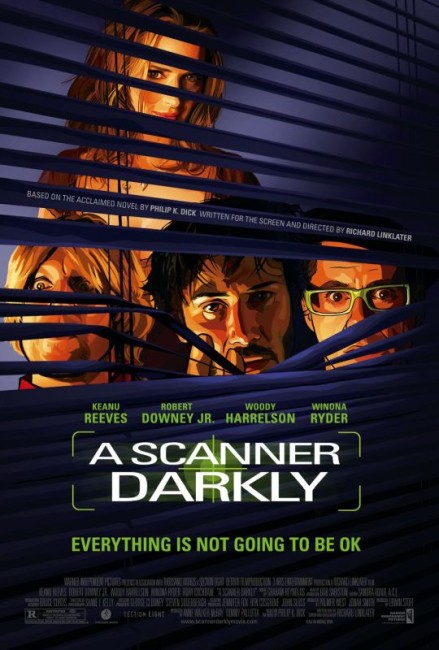 Anaheim, California, seven years into the future. The country has a problem with a highly addictive new drug Substance D. Fred is a police officer assigned to deal with Substance D suppliers. Fred has to wear a Scramble Suit that constantly blurs his appearance so that nobody on the force knows his true identity. He is assigned to observe the hidden scanners placed in the house of Robert Arctor who, along with his girlfriend Donna Hawthorne and friends James Barris and Ernie Luckman, is suspected of being a major Substance D dealer. Through his surveillance, Fred becomes aware that he himself is Robert Arctor. At the same time, Fred is taken in for medical studies by the police department to see if repeated use of Substance D in his undercover work is causing difficulty in being able to distinguish reality, including the possibility of splitting his identity.

A Scanner Darkly – which is no relationship to the David Cronenberg psi-powers film Scanners (1981) and sequels – is based on a 1977 novel by cult science-fiction author Philip K. Dick. Philip K. Dick is known for numerous science-fiction novels including The Man in the High Castle (1962), Martian Time-Slip (1964), The Three Stigmata of Palmer Eldritch (1964), Do Androids Dream of Electric Sheep? (1968), Ubik (1969), A Maze of Death (1970), Flow My Tears, The Policeman Said (1974) and Valis (1981). (A list of the films based on Philip K. Dick’s works is at the bottom of the page). Dick’s work frequently centres around doubts about the nature of reality or personal identity – characters in Dick stories frequently discover that what they believed to be real or who they are is an elaborately constructed illusion.

A Scanner Darkly was regarded as one of Philip K. Dick’s best novels and was one of the last works that Dick published before his death in 1982. A Scanner Darkly came out of Dick’s experiences in the 1970s. Dick, like the hero of the book Fred/Bob Arctor, was heavily involved in the drug scene during the late 1960s/early 1970s. During this period, Dick also turned his home into a flophouse-come-commune for a number of youths that were using hard drugs. Indeed, the book contained an afterword, something that is movingly recreated at the end of the film, of a list of people whose lives Dick had seen be destroyed by drugs.

In other parallels, Dick began to have a series of bizarre visions in 1974, believing among other things that his mind was taken over by aliens and at one point that he was leading dual lives, one as Jesus’s disciple Thomas. Dick was also paranoid that the FBI were constantly surveilling him and at one point believed that either they had broken into his house and stolen papers from his safe or else that he had done it himself and blanked out all memory of having done so. In 1972, Dick checked himself into a drug rehab centre in Vancouver, an experience that directly influence the portrait of the drug rehab centre that the protagonist goes to at the end of the story here. A Scanner Darkly winds these elements into the story – the drug flophouse, the paranoia about surveillance, the doubts about personal identity fracturing, and the vision of a person whose life had been weighed down and destroyed by drug usage.

Richard Linklater is a director who hails from Austin, Texas and has an interestingly original voice in contemporary cinema. Linklater first caught attention with his second film Slacker (1991), a hilarious mockumentary that purported to interview various eccentrics on the streets of Austin. Linklater went onto often individualistic films like Dazed and Confused (1993) and subUrbia (1996), which both depicted teenagers on the edge of leaving school into adulthood, and Tape (2001), which had a group of former school friends re-gathering to reminisce; Before Sunrise (1995) and its sequels Before Sunset (2004) and Before Midnight (2013), which had Ethan Hawke and Julie Delpy engaged in a series of philosophical observations about life while wandering the streets of Paris; Boyhood (2014) covering the life of a boy, which was shot over a twelve-year period; and more commercial works like The School of Rock (2003) and The Bad News Bears (2005).

Richard Linklater’s work seems caught between an acute ability to conduct slice-of-life observations of people on the cusp of adulthood and works that are more akin to personal philosophical ruminations in the form of freewheeling dialogues and often a love of nutty theories and quirky observations. All of these latter came to bear in Linklater’s Waking Life (2001), which consisted of a series of speculations and philosophical mini-essays principally on the nature of dreaming. The unique method that Linklater used with Waking Life was to shoot the entire film on video and then gather a team of animators to trace artwork over the top (a process known as rotoscoping). Linklater later returned to animation and autobiography with Apollo 10½: A Space Age Childhood (2022).

Richard Linklater took on the job of adapting A Scanner Darkly with the blessing of the Philip K. Dick estate. (Both Terry Gilliam and Charlie Kaufman had apparently had shots at making a live-action verson with no success). A Scanner Darkly is very much an extension of what Linklater did in Waking Life – both in style and in subject matter. Indeed, Waking Life is a very Dickian film in itself – and Dick even gets a mention in the film during an anecdote narrated by Linklater himself. A Scanner Darkly uses a more sophisticated version of the animation process in Waking Life. Here Linklater has hired a number of name actors (Keanu Reeves, Robert Downey Jr, Woody Harrelson, Winona Ryder and Rory Cochrane) and has rotoscoped over their performances, yet also preserved their distinctive facial features. The result is not unakin to The Polar Express (2004) with its performance-captured animation. However, Richard Linklater goes beyond the realistic renderings of The Polar Express and transforms the three-dimensional looks of his actors into jaggedly impressionistic brush strokes.

Philip K. Dick’s games of double identity are not always easy to follow, but A Scanner Darkly manages to be a rewarding film nevertheless. Oddly, Richard Linklater seems disinterested in the science-fiction aspects of the story. Though the rotoscoping would have offered great ease in replacing the settings with something futuristic, Linklater keeps the backgrounds of the future – the cars, the phones – all contemporary, excepting when it comes to the Dickian device of the scramble suits.

Though A Scanner Darkly is very faithful to the Philip K. Dick book, Linklater also manages to make it identifiably a Richard Linklater film. In adapting the book, Linklater has made a beeline not for science-fictional elements but for the eccentric characters around the edges of the story voicing wacky theories. Not having read the book, one is not sure to what extent characters like James Barris and Ernie Luckerman came across there, but here they seem distinctively Linklater-esque originals. The funniest moments in the film are the monologues between the various druggies – the side-splitting debate over Robert Downey Jr’s purchase of an 18-gear bicycle that may or may not be stolen; the equally hysterical piece about whether Robert Downey left the door unlocked as a security precaution and whether the house is bugged or not. In this respect, A Scanner Darkly is not too different from Linklater’s Slacker and its parade of eccentrics or the drift through quirky philosophical ideas that came in Waking Life.

There are some wittily standout performances from Woody Harrelson, Rory Cochrane and especially from Robert Downey Jr, whose twitchily paranoid and manic character ends up stealing the show. (In an edgy casting choice on Linklater’s part, one can also note that both Downey and Harrelson, cast as drug users here, have both had high-profile brushes with drugs and the law). Keanu Reeves gives a typically flat performance in animation as in real life, but the character and his reality bending splits is a strong one.