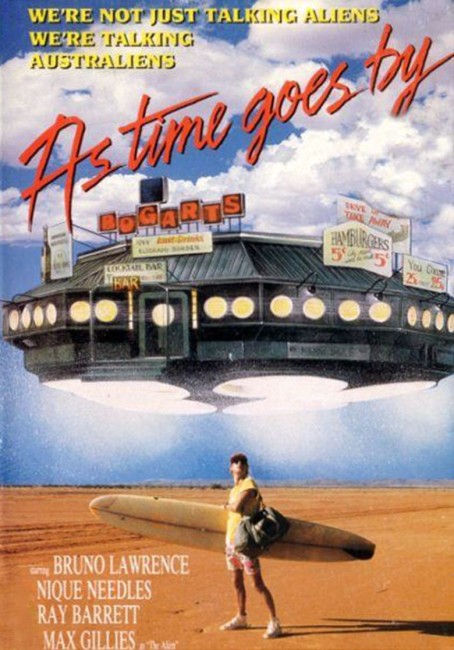 Mike Taggart has persuaded two women friends to drive him out to go surfing in the middle of the Australian Outback. After arguing, they dump him in the middle of nowhere not far from the town of Dingo. In the township, Mike reveals that on her deathbed his mother gave him a note that was given to her 25 years before telling him to meet someone at a place called Joe Bogart’s 50 miles west of Dingo tomorrow. He is hoping it may offer some clue as to who his father is. There proves to be nothing at the specified location. However, the following day, a diner called Joe Bogart’s has appeared on the spot. Inside, Mike meets the green-skinned Joe Bogart who claims to be an alien. Bogart left the note with Mike’s mother in order to bring Mike here because he needs Mike’s help in finding a lost power capsule so that he can travel back in time and prevent the Japanese from winning World War II. In trying to help Bogart sort history out, Mike is caught up between various townspeople, astrophysicists, businessmen and sheep rustlers who want the power source and mistakenly believe that Mike is the alien.

In synopsis, As Time Goes By sounds a funky film – a surfer abandoned in the middle of the Australian Outback encounters an alien who time-travels in a ship that looks like a 1950s greasy spoon restaurant and embroils the hero in a chase that involves him sorting out a time paradox so that he can wind back time to prevent the Japanese winning World War II.

However, the finished article comes out far less interestingly than it sounds on paper. The promising idea gets lost amid the frenetic and silly comic tone. The initially conceptually ambitious plot soon drops off, leaving loose ends all over the place, and the film instead becomes a screwballing comedy of collisions with various characters running around the desert after the hero and power source from the spaceship. It should be funny but the result feels more like one is caught in the midst of a pinball game being conducted by the screenwriters.

The film does pick up at the ending, which involves hero Nique Needles trying to travel back and edit time so that Bruno Lawrence is not killed and the surprise revelations about his real identity. The time travel element is not well delineated – it is never too clear about the various other scenarios that the alien has used to try and obtain the power source or how Bruno Lawrence’s son has managed to survive being hit by the cricket ball and how Lawrence ended up mistakenly thinking that he killed him. The film is filled with the eccentric characters that seem to always populate screen depictions of the Australian Outback. Max Gillies gives an exceedingly bizarre performance as the alien – like a wind-up version of a brassy gameshow MC.

As Time Goes By was the fourth film of Australian director Barry Peak. Peak and this film’s producer Chris Kiely previously ran an independent film distribution company. Peak’s one other genre outing (co-directed with Kiely) was Future Schlock (1984), a satire set in a future Melbourne where the middle-class and youth radicals are engaged in a social war. Peak has yet to direct another film subsequent to As Time Goes By.