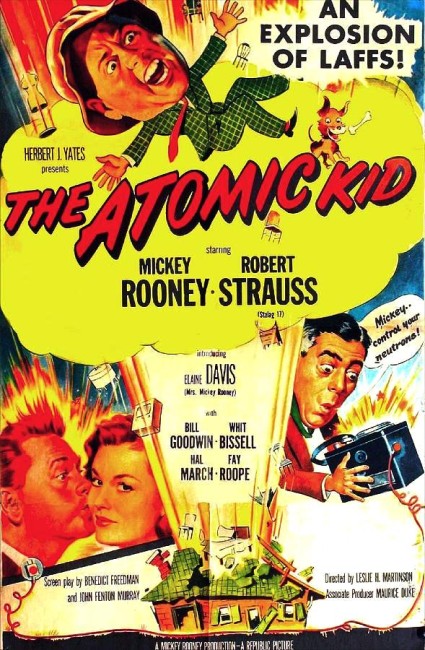 Two friends, Stan ‘Wildcat’ Cooper and Blix Waterberry, go uranium prospecting in the desert. There they come upon a strange house filled with dummies that reads as a plentiful uranium supply on their geiger counters. Stan rushes back to town to buy the site, leaving Blix to guard the house, only to find that the house is a test area for an atomic bomb detonation. The bomb is fired and Blix caught in the middle of it. However, he walks out of the blast unharmed. Afterwards though, his body develops an ability to emit high quantities of neutrinos and cause explosions about him whenever he gets excited.

With the exception of his awful racist impersonation of a Japanese man in Breakfast at Tiffany’s (1961), this must be the strangest film Mickey Rooney has ever done – at least, up until his appearance as an angel in the softcore relationship drama Making Waves (1994).

The Atomic Kid not a particularly good film – after getting started, the story is at a loss what to do with its premise and runs around vague subplots involving Russian spies and foxy love interests and various slapstick pratfoolery with Mickey Rooney glowing in the dark and causing explosions with his sneezes. For one who personally finds the burlesque antics of the likes of Abbott and Costello and their even less successful imitators akin to watching decapitated hens running about, the prattlings of Rooney and Robert Strauss weary very quickly.

The Atomic Kid has a certain amusement in the fact that it was the only science-fiction film of the 1950s wherein a atomic bomb actually made somebody radioactive. On the other hand, this is equally a film that can have someone survive at the epicentre of an atomic bomb explosion and emerge unscathed.

The idea for the film was conceived by Blake Edwards, later to become a well-known director, principally of Pink Panther movie fame. Director Leslie H. Martinson would become a prolific tv director in a career that has spanned five decades. His most notable other genre outing was the theatrical Batman (1996), the film spun off from the 1960s tv series.