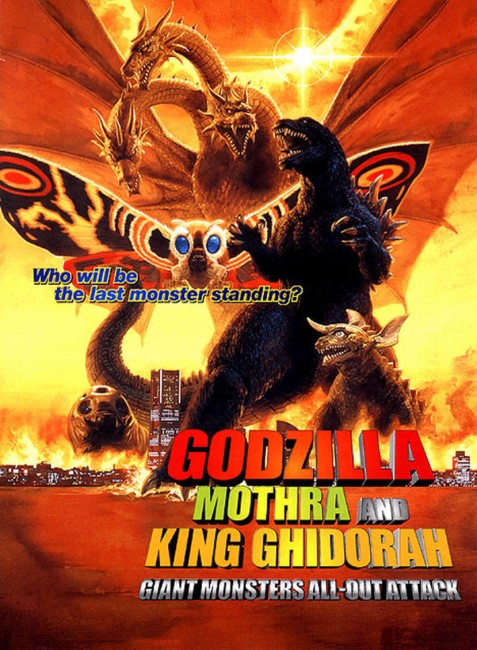 A Japanese navy submersible descends to investigate the sinking of a US nuclear submarine. The crew returns with film footage of a monster and it is realised that Godzilla, believed destroyed 50 years ago, may have returned. Yuri Tachibana, the daughter of a Navy admiral, is a reporter for a sensationalistic cable station. She is taping as an apparent earthquake occurs. After meeting a mysterious elderly man who survived the original Godzilla attack in 1954, Yuri comes to believe that the three Guardian Sacred Beasts are returning to life to face Godzilla. Godzilla has been resurrected as an incarnation of all the souls that were killed in the Pacific Theatre during World War II. Godzilla now begins a rampage across the country. Variously, the Guardian Beasts, consisting of Baragon, the flying moth Mothra and the three-headed Ghidorah, return to life and converge on Tokyo in an attempt to stop Godzilla’s trail of destruction.

Godzilla Mothra and King Ghidorah: Giant Monsters All-Out Attack was the 25th Japanese Godzilla film. Toho had had some success throughout the 1990s reviving the series and employing a modern arsenal of state-of-the-art animatronic and later CGI effects to replace the cheesy old men in rubber suits effects of the 1960s and 70s. With Giant Monsters All-Out Attack they employed director Shusuke Kaneko. Over at Toho’s rival Daiei, Kaneko had successfully revived the Gamera series, which had always been a competitor of Toho’s Godzilla series, with Gamera, The Guardian of the Universe (1995), Gamera 2: Assault of Legion (1996) and Gamera 3: Revenge of Iris (1999). In the three of these, Kaneko reworked the Gamera films of the 1960s with a stunning array of effects. Indeed, it was Shusuke Kaneko’s revival of the Gamera series that became the benchmark for the 1990s kaiju eiga and directly prompted Toho to update the Godzilla series. (See below for Shusuke Kaneko’s other films).

Many of the 1990s and 00s Godzilla films resurrect monsters that Godzilla fought in the 1960s and 70s. Shusuke Kaneko had reportedly wanted to resurrect some of the more obscure monsters – Anguirus from Gigantis the Fire Monster/Godzilla Raids Again (1955) and Varan from the non-Godzilla Toho movie Varan the Unbelievable (1958) – but was told to stick with popular favourites – Mothra, Ghidrah/Ghidorah who first appeared in Ghidrah the Three-Headed Monster (1964) and Baragon, who first appeared in the original Frankenstein Conquers the World (1966) and was subsequently incorporated into the Godzilla series.

Shusuke Kaneko’s attempt to revise the Godzilla series comes with mixed results. For one, Godzilla Mothra and King Ghidorah: Giant Monsters All-Out Attack considerably disrupts the continuity of the series – not that this was ever a particularly strong element. It essentially pretends that all the other sequels subsequent to Godzilla, King of the Monsters (1954) did not exist. We are told that Godzilla was destroyed in 1954 and only revived now. Godzilla also reverts to being a monster rather than Japan’s protector. The design has been streamlined and Godzilla made to look a much more evil creation than before – narrowed eyes, a squat square-shaped head and snout, while it gains the ability to create miniature atomic bombs with his breath. When it comes to the character of Mothra, the film dispenses with the twin sisters that have accompanied it throughout all its other appearances on film (although Shusuke Kaneko does include a brief shot where Mothra first takes to the air and we see two twin sisters looking up in a mall). Kaneko also tosses off amusingly snide putdowns of the much-reviled American remake Godzilla (1998). It is mentioned how one of the Godzilla monsters attacked New York at the end of last century. “That was Godzilla – right?” “They say so in America. But not in Japan.”

Toho clearly believed that in employing Shusuke Kaneko that he would create an enthralling special effects vehicle as he had done with Daiei’s Gamera series. One’s expectation of Godzilla Mothra and King Ghidorah: Giant Monsters All-Out Attack was that Shusuke Kaneko would have created a kickass Godzilla film to end all Godzilla films. Unfortunately, the results emerge somewhat less than the expectation. Certainly, Shusuke Kaneko is one of the few kaiju eiga directors to fully depict the mass destruction that such monsters would undoubtedly create – his films often feel like they are placing giant monsters into the real world – and there is a good deal of random violence wherein innocent passers-by are killed. However, he fails to quite hit the same heights here that he did with his Gamera films. Some of the monsters look decidedly less than special. Baragon is designed like a big plastic toy with an absurd bright orange horn planted in the middle of his forehead that looks like it might have stepped out of a 1970s Godzilla film. He is even called ‘kawaii’ (Japanese for cute) at one point. Ghidorah looks glassy-eyed and immobile with its stubby wings and oversized feet.

That said, Shusuke Kaneko still delivers some highly impressive mass destruction sequences. Characteristically, Kaneko takes his time building up to the entrance of the monsters – it is a full 35 minutes before any of them appear. Godzilla has a great entrance – a giant waterspout appearing over the harbour and then it first being seen from knee-height looking upwards and dropping a boat from its mouth. There are some stunning special effects set-pieces with Godzilla lasering Baragon with its breath and bringing down an entire mountainside, or Godzilla in the middle of a valley blasting fighter planes down in flames with its breath.

When it comes to the battles, there is all the expected mass destruction with huge explosions, monsters body slamming one another through skyscrapers, vast balls of energy and so on. Incredibly exciting stuff. Shusuke Kaneko also creates stunning images like that of Mothra emerging from its shell, slowly unfurling its wings and taking to the sky under blue moonlight. Mothra is now an extraordinarily beautiful creation with mottled red wings, blue glowing eyes and a miniaturised white insectoid underside. There is a fabulous shot where the resurrected Ghidorah reappears, spreading its giant wings in silhouetted golden light from behind a skyscraper and then triumphantly appearing up over the top.

One of the features of Shusuke Kaneko’s Gamera films was a more mystical interpretation of the monsters, something that tends to much in the way of woolly-headed New Age cliches. Likewise here, Kaneko comes up with the idea of Godzilla being an embodiment of all the souls that died in the Pacific theatre of war during World War II – an intriguing idea that alas remains unexplored beyond first being mentioned.