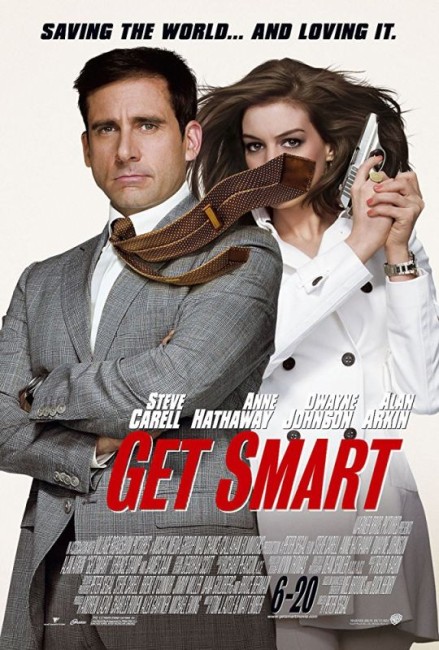 Maxwell Smart is a top data analyst with the US spy agency CONTROL. Max yearns to be a field agent but is turned down by The Chief because his skills are needed in the office. Rival agency KAOS then attack CONTROL Hq and obtain a list of all field agents and start eliminating them. In desperation, The Chief recruits Max as a field agent because his face is unknown. Named Agent 86, Maxwell is paired with the gorgeous Agent 99 who is also unknown because she has just had her features surgically altered. The two are sent to Russia to prevent KAOS’s attempts to procure nuclear weapons. The highly competent Agent 99 is scornful of Max’s constant bumbling. Max is certain that he has tracked down the KAOS nuclear operation hidden beneath a Moscow bakery. However, when no evidence is found, Maxwell is thought to be a double agent and is arrested.

Get Smart (1965-70) was one of the classic comedy series of the 1960s. The show was construed as a parody of the massively popular spy film fad created by the James Bond series. Of all the spoofy takes on the Bond films that flourished around the time, Get Smart was one that took off with its own life and developed a cult following. Gags like the shoe phone and the Cone of Silence have become undisputed classics. The series had originally been pitched to Mel Brooks, then a stand-up comedian and tv gag writer and not quite having made his name as a director at that point (which would have to wait until The Producers (1968), which Brooks always claims the success of Get Smart funded). Mel Brooks’ influence on Get Smart has been over magnified – he only wrote several episodes and then bowed out, turning the show over to his good friend Buck Henry (although he was the one who did come up with the shoe phone gag and the name of the central character). Get Smart enjoyed an enormous popularity, winning two Emmy Awards as Best Comedy Series and has remained in perpetual syndication ever since. Don Adams was typecast as a result of the show, reprising the role in numerous commercials and later being cast as the voice of another incompetent spy in the animated tv series Inspector Gadget (1983-5). Adams at one point claimed to be so typecast by the Maxwell Smart role that he could not sit down in a restaurant without someone handing him their shoe and saying “It’s for you.”

Prior to this big-screen revival, there were a number of other attempts to revive Get Smart. Don Adams (but not Barbara Feldon) appeared in a previous big-screen revival The Nude Bomb (1980) but the creative talents behind the original were absent and fans of the series regard that film poorly. A more successful revival came with the tv movie Get Smart Again (1989), which brought back many of the original cast and recaptured some of the wackiness of the series’ humour. There was a further attempt to bring the series back with Get Smart (1995), which reunited a now aging Don Adams and Barbara Feldon and featured Andy Dick as Smart’s son, but this was dismal and only lasted a merciful seven episodes.

If nothing else, the Get Smart movie pays its obeisance to the fans of the original by packing in a maximum number of references to the series – appearances from familiar supporting characters like Larrabee, Hymie, Agent 13, Siegfried and Shtarker, even of Max’s car from the original to cameos from some of the still living personnel behind the series. There is the inevitable appearance of the famous shoe phone at the end, even a slightly technologically updated version of the opening credits sequence. And surely there is no actor around better suited at getting down Don Adams’s patented sense of deadpan ridiculousness than Steve Carell, a major comedy name on the rise since the success of The 40 Year Old Virgin (2005) and tv’s The Office (2005-13).

There is also something about the Get Smart movie that seems crashingly redundant. Austin Powers, International Man of Mystery (1997) and various sequels and imitators have surely exhausted all possibilities that sending up the James Bond spy fad could ever have held. (The character of Dalip Singh’s redeemable giant heavy has been strongly modelled on Richard Kiel’s Jaws in the Bond films and the scenes where everyone goes skydiving without parachutes have been taken out of Moonraker (1979) almost in toto). Even the rise of cellular phone technology means that the shoe phone gag is one that today’s modern generation no longer get. That leaves us with a film where the sole area of appeal is the brand name that the original series had.

As a film, Get Smart sits on screen and resolutely fails to go anywhere. Much modern humour that has come in – Max’s colleagues insult him with names like “Maxi-pad” and “Maxine”, while there are crude jokes about sexual harassment, kicks in the testicles etc – that the original would have never deigned to. Oddly, there is surprising amount of contemporary political reference – Maxwell is mistaken for a shoe bomber by a sky marshal at one point, there is reference to Homeland Security and yellowcake uranium (which featured prominently in the CIA intel leading up to the Iraq War), while there is a spoof of a scene where President Bush was reading a children’s story when news of disaster hits. Not to mention a plot where Max is arrested over a failure to find non-existant Weaposn of Mass Destruction. However, the inclusion of this tends to puncture the balloon of the zany unreal world that the original tv series lived in.

Crucially Peter Segal, the director behind various mainstream comedies like The Nutty Professor II: The Klumps (2000), Anger Management (2003), 50 First Dates (2004), Grudge Match (2013) and My Spy (2020), never seems attuned to the sense of humour that drove the original Get Smart. You come out of the film feeling that you have seen a middle-of-the-road and unexceptional Steve Carell comedy rather than the Get Smart tv series has been adapted to the big screen.

The characters have been substantially altered. For one, Steve Carell’s Maxwell is too competent. The film has made the modern mistake of feeling that it has to explain away and give motivation to Maxwell – thus we goes from Don Adams’ bumblingly ineffectual clown to Steve Carell’s Maxwell who is a brilliant analyst and whose only problem is that he is nerdy and inexperienced in the field but who comes through at the end of the day.

The revision of Agent 99 fails to work either – the idea has been to turn her into a modern woman, highly competent and well trained as a spy, but this results in Anne Hathaway playing the part with a sarcastic lip and prickly relationship with Maxwell that is very different to the Don Adams and Barbara Feldon relationship in the tv series and never gels much on the screen. Terence Stamp’s Siegfried becomes a standard spy film super-villain with none of the friendship across opposing sides there was between the Maxwell and Siegfried of the tv series.

Furthermore, Peter Segal is too realist with the action. There are gags but everything takes place in a realist milieu. By comparison, the tv series was a constantly absurdist one where the nonsensical gags took place in perpetual deadpan. Segal and the scriptwriters keep setting up gags that feel like they would have been funny on paper – the Cone of Silence, the dancing sequence – but never produce much in the way of laughs. When it comes to the climactic action scene with Steve Carell dangling from a small plane and then dragging along behind a train, there seems nothing to it that is distinguishable from a standard action film played seriously, which you cannot help but think seems sad for a Get Smart movie.

Get Smart 2 has been announced ever since the original came out. At the same time as Get Smart appeared, a DVD-released spinoff was also released with Get Smart’s Bruce and Lloyd: Out of Control (2008), an adventure featuring the two gadgeteers Masi Oka and Nate Torrence, which also included a cameo from Anne Hathaway. Get Smart was parodied in Disaster Movie (2008).