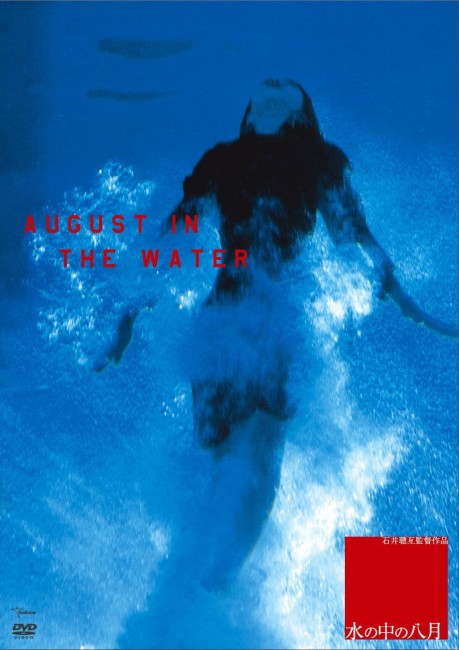 (Mizu no Naka no Hachigatsu)

Earth is being affected by a black hole. Two meteorites land in the Fukuoka area of Japan after which the area becomes affected by a drought. People then start collapsing with what is termed the Turning to Stone disease. In Genkai City, schoolgirl Hazuki Izumi goes into a coma after nearly drowning in a diving competition. She emerges to realise the truth about the Turning to Stone disease – Earth is the only planet where stone has become liquefied and people are now returning to their natural state, a place where they are able to mentally commune with all other species again.

One gets the impression that this Japanese arthouse release has sought Andrei Tarkovsky’s masterful Stalker (1979) as its model. The films are thematically different but both seem to operate on the notion put forward by J.G. Ballard that disaster should not function as mere drama but rather as a fulcrum of inner psychological processes. Ballard had a mastery of the form. His work is filled with cataclysms – vast droughts, transformations of landscape into crystal, the collapse of civilised order – that act as mirrors of inner states of mind. Stalker was a Ballard-esque film about the inner processes resulting from a mysterious alien visitation.

However, while August in the Water conforms to the Ballard-esque model, the nature of the disaster and the inner psychological processes are so cryptically presented as to leave the entire audience excluded from what is happening. The film makes no sense whatsoever on a narrative level – the heroine is inexplicably revealed to be a ghost halfway through; water is becoming more solid and this appears to be the universe returning Earth to its natural state; all of this is in some way linked to a drought, although the end of the film that features the drought ending as the heroine dies seems to negate what the film is saying about this. There is a minor subplot involving the killing of a professor but this is developed devoid of connection to anything else.

If anything, August in the Water is a New Age science-fiction film – one where astrology works, stone markings reveal cryptic knowledge and have mystical importance, and the heroine has a cosmic revelation where she realises that everything on Earth is made of the same molecules. Certainly, whatever it is it is bad science-fiction – the talk about stone being the natural state of all lifeforms in the universe is nonsensical scientifically speaking. To make things worse, the film has a pace that is near to inert.

August in the Water comes from Japanese director Sogo Ishii who has been credited by his given name Gakuryu Ishii since the 2000s. Ishii’s other films of genre interest include:- Burst City (1982) set in an anarchic future; the serial killer thriller Angel Dust (1994); Labyrinth of Dreams (1997) about a woman who is attracted to a man who may be a serial killer; Electric Dragon 80,000 V (2001) about someone with electrically charged super-powers; Isn’t Anybody There? (2012) about a series of inexplicable deaths on a campus; The Flowers of Shanidar (2013) about a valuable medicinal flower that blooms on the chests of young women; and the ghost story Bitter Honey (2016).