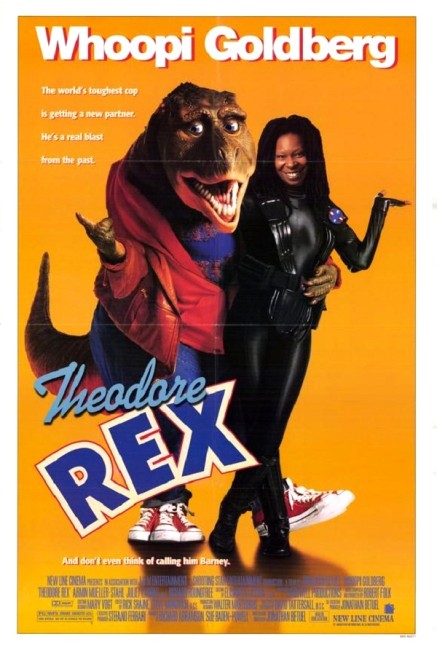 In the future, billionaire geneticist Elizar Kane has managed to genetically revive many extinct species, including the dinosaur. As a result, intelligent dinosaurs now hold a minority position in society. Police now encounter the first ever murder of a dinosaur. Theodore Rex, a dinosaur who works as the police department’s token PR person, begs to be assigned to the case. He is partnered with the burned-out detective Katie Coltrane. As the two investigate, they realise they have stumbled into a conspiracy to alter the course of evolution by transforming the Earth into a new Ice Age.

When it came out, Theodore Rex attained some sort of notoriety as the most expensive film to ever circumvent theatres and go straight to video release. While such is commonplace these days, it was seen as indicative of a substantial flop back in 1996.

Theodore Rex was the second film of Jonathan Betuel whose only previous directorial outing was the equally uneventful My Science Project (1985) made eleven years before. Betuel had done nothing in between except for producing work on the dire Freddy’s Nightmares – A Nightmare on Elm Street: The Series (1988-90) tv series. Before that, Jonathan Betuel’s only other success was the script for The Last Starfighter (1984), which at least obtained a theatrical release but was as empty-headed as the rest of his work. Jonathan Betuel has not made anything subsequent to the flop of Theodore Rex and nowadays manages the special effects company Luma Pictures.

You can see the way the cogs in people’s thinking worked when it came to dreaming Theodore Rex up – it is a working attestation of the old chestnut about every film in Hollywood being sold in terms of comparisons with previous successes. Theodore Rex has clearly been pitched as Jurassic Park (1993) meets Lethal Weapon (1987). After the success of the Lethal Weapon films, the fantastic genre coughed up all manner of bizarre non-human buddy cop team-ups:– cop and vampire in tv’s Forever Knight (1992-6), cop and alien in Alien Nation (1988), cop and zombie in Dead Heat (1988), even cop and gnome in Upworld/A Gnome Named Gnorm (1991), but Theodore Rex (the pairing of cop and dinosaur) was possibly the most bizarre of them all.

(It also intriguingly shows the paradigmatic shift that was produced by Jurassic Park – prior to that, the concept of animals revived from DNA fragments was a wildly revolutionary idea that would never have gotten out of the pages of a scientific journal, but now it becomes a de rigeur explanation thrown in to justify the proceedings. It also comes with a complete lack of plausibility – the film leaps from genetically reengineered dinosaurs to them suddenly taking the place of an intelligent minority group in society).

All that Theodore Rex has going for it is the cuteness of its concept and that is simply not enough to carry it. The dinosaur suit effects are reasonably good but the dinosaurs are played and voiced with a simplicity that makes them into little more than live-action cartoon characters – indeed, the dinosaur characters look almost identical to the talking dinosaurs in the live-action sitcom Dinosaurs (1991-4). The character of Theodore Rex and the inanity of the banter between he and Whoopi Goldberg tires quickly. That there are dinosaurs in the story is almost of no significance – the character of Theodore could have been played by a vastly obese, a wheelchair-ridden person or a talking goldfish for all the difference it makes.

In addition, Betuel fails to come up with a worthwhile detective story to hang everything on. The film may have been able to work with a sufficiently gonzo approach. Bizarrely enough, the idea of dinosaur detectives in the modern day was played seriously in the subsequent tv movie Anonymous Rex (2004), which is at least conducted its scenario with a certain degree of interest. However, it is hard to see what inspired people to make a turkey like this.

Whoopi Goldberg gives a sour performance. She has hardly made a good choice of parts in the past with turkeys like Jumpin’ Jack Flash (1986), Fatal Beauty (1987) and The Telephone (1987), but here she seems decidedly pissed off no doubt at having to play off against a big rubber dinosaur. Indeed, after making a verbal agreement to appear in the film, she backed out upon reading the script and was then sued by the producers, forcing her to appear.

The usually reliable Armin Mueller-Stahl makes for a poor villain of the show, while Juliet Landau does a dire job as his assistant, seemingly trying to imitate Sarah Douglas. The sets are all colourfully overlit – they have a stagebound artificiality to them that makes the film look as though it is taking place in a children’s amusement park.