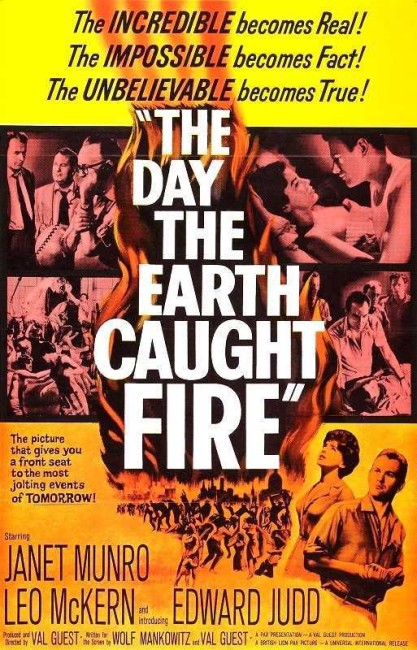 Coincidentally, both the Americans and the Russians detonate hydrogen bombs at the North and South Poles at the same time. Soon after, Britain begins to experience a freak heatwave. Peter Stenning, a journalist at The Daily Express, receives a tip-off from his girlfriend Jeannie Craig, a switchboard operator in government offices, and uncovers the fact that the explosions have caused an eleven-degree tilt of the Earth’s axis. He prints an article, which results in her arrest. Then comes the even more disturbing announcement that the explosions have knocked the Earth out of its orbit and sent it on a course towards the sun. As the heat rises, The Thames dries up and water rationing and communal showers are instituted. There is panic and rioting all over England. The only hope lies for scientists to detonate further nuclear weapons in the hope that this might jolt the Earth back into its correct position.

The Day the Earth Caught Fire was one of a host of films that came out in the early 1960s confronting the possibilities of nuclear war full on. This grimly real genre had been started by On the Beach (1959) and still ahead would be the likes of Panic in Year Zero! (1962), Dr Strangelove or, How I Learned to Stop Worrying and Love the Bomb (1964), Fail-Safe (1964) and The War Game (1965). The Day the Earth Caught Fire was a personal project mounted by director Val Guest, best known within the genre for the first two Quatermass films. (See below for Val Guest’s other films). Guest found some difficulty mounting the project and eventually ended up financing it in part with his own money.

The film is made on a slim budget, nevertheless Val Guest manages extraordinary things with it. He depicts the scale of the disaster with a remarkable economy. Special effects artist Les Bowie creates some striking matte shots of a dried-up Thames and the cracked, parched earth outside the Kremlin, the Taj Mahal and other world landmarks. Particularly good is Guest’s ability to incorporate stock footage of desiccated desert, of forest and building fires and of emergency services rushing into operation – in one scene, he even manages to insert Edward Judd into the middle of a CND demonstration. Even more striking is when he pans away from the disaster scenes to reveal the names of English landmarks to the extent where you are never sure what is real and what is not.

Guest also scored the coup of being able to shoot the film in and around the offices of the real Daily Express newspaper – he even obtains an appearance from then-editor Arthur Christiansen as himself. It is something that, along with Guest’s soberly documentary-like depiction of such an environment, more than credibly grounds The Day the Earth Caught Fire. It is, for example, at least half-an-hour in, observing the life of the newspaper office and Edward Judd’s self-destructive habits, before we arrive at the heatwave.

These scenes are crafted with some surprisingly good characterisations, particularly as we follow Edward Judd’s hero going from down-and-out alcoholic to gaining his feet again. The dialogue is sharp and well written – the scenes between Edward Judd and Janet Munro have a surprisingly adult level of banter for the time. The show is stolen in large part by a wryly cynical performance from Leo McKern.

The Day the Earth Caught Fire is much more of a science-fiction film than any of the abovementioned nuclear war films are. Their concerns with the nuclear situation fell well within the possibilities of contemporary technology, whereas The Day the Earth Caught Fire concerns itself with the sweeping climactic changes of an entirely hypothetical (and scientifically ludicrous) scenario.

Certainly, there are few films that manage to convey a basically scientifically nonsensical premise with such an absolute and thorough conviction – in reality, the detonation of the entire modern nuclear arsenal would barely even cause an earthquake that would be felt across the other side of the American continent, let alone move the Earth from orbit. Whatever The Day the Earth Caught Fire lacks as science, it more than makes up for with its entirely credible social portrait of the situation – images of water-riots, queues for communal showers in Hyde Park, people buying water on the black-market just to tend their garden.

Perhaps the most interesting part of The Day the Earth Caught Fire is the way it ends on a deliberate note of ambiguity rather than resolution. People sit about waiting for the outcome of the attempts to correct the Earth’s orbit but instead of offering an ending, in the last shot Guest pans away to reveal two different copies of the next day’s newspaper headline – one saying ‘Earth Doomed’, the other saying ‘Earth Saved’. The film then fades out, leaving the world’s fate uncertain.

Interestingly enough, The Day the Earth Caught Fire premiered only a matter of days after a very similar treatment of the Earth heating up due to moving closer to the Sun in The Midnight Sun (1961) episode of The Twilight Zone.

Val Guest’s other films are:– the comedy Mr Drake’s Duck (1951) about a duck that lays radioactive eggs; various of Hammer’s Nigel Kneale adaptations The Quatermass Xperiment/The Creeping Unknown (1955), Quatermass 2/The Enemy from Space (1957) and The Abominable Snowman (1957); The Full Treatment (1960) about a racing driver suffering psychopathic impulses; Life is a Circus (1960), a comedy involving a genie; as co-director of the James Bond spoof Casino Royale (1967); the prehistoric drama When Dinosaurs Ruled the Earth (1970); and the sf pop music film Toomorrow (1970).