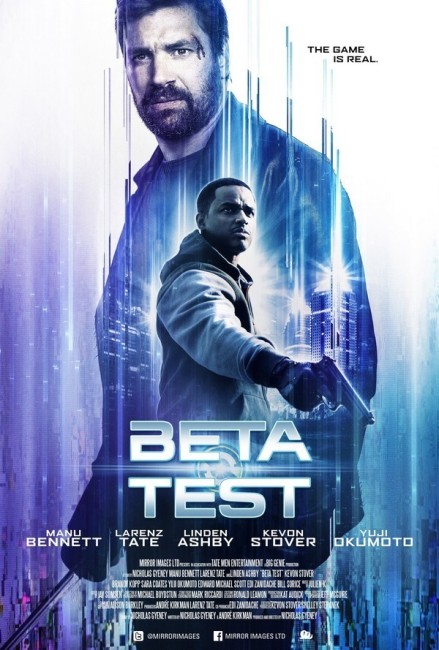 Andrew Kincaid, the CEO of the videogame corporation Sentinel, takes a public stance in favour of gun control in videogames, publicly contradicting his security officer Orson Creed. As Creed watches the interview on tv, armed men burst into his home, take his wife hostage and forcibly implant a control chip at the back of his neck. Meanwhile, Max Troy, the company’s top videogame tester who has remained housebound, traumatically afraid to go out of doors following the death of his dog, has the test version of Sentinel delivered to him. He starts to play the game, unaware that the first-person shooter he is playing is actually the mind-controlled Creed. His assignment is to send Creed to downtown Seattle and break in on a bank robbery, kill the gang members and get away with the money. When Max realises what is going on is a real bank robbery conducted by armed mercenaries hired by Kincaid, he decides to hack the game and save Creed.

Beta Test was the fourth film directed by Seattle-based filmmaker Nicholas Gyeney. Gyeney operates as an independent and has so far made The Falling (2006) about a cop drawn into a war between Heaven and Hell, the time travel film The Penitent (2010) and the dark comedy Matt’s Chance (2013), as well as produced the horror film Cut/Print (2012) and the gender-swap light fantasy Second Nature (2016).

Beta Test comes with the same premise as the better-budgeted Neveldine/Taylor film Gamer (2009) from a few years earlier – the idea of live-action videogaming where gamers send mind-controlled humans into combat. I liked the premise that Beta Fest started in with – a videogame tester with agoraphobia issues is forced to play a first-person shooter game and then realises that he is controlling the mind of another human being. This leads to some amusement as we go through the initial scenario where he is sent to break in on a bank robbery and walks through with typical gamer gung ho assuming he can just reboot if he gets killed.

The premise holds interest for a certain amount of time but Beta Test soon turns the tables on its scenario whereupon it rapidly loses all interest. After the point that Larenz Tate works out what is going on, decides to conduct his own custom mods and reprograms Manu Bennett, all that we get is just another action film.

It is also this point that you start contemplating just what an absurd scenario that you get. Videogame company CEO Linden Ashby disagrees with security chief Manu Bennett’s views on gun control (a confused debate that has something to do with whether guns are better off in videogames than on the street) so he abducts Manu’s wife, inserts a mind control chip into Manu and has him played as a human player character shooting up a private army that Ashby has also hired for the express purpose of robbing banks and acting as cannon fodder for the game all because – well, we are never quite sure why.

This does lead to an undeniably impressive scene, of which Nicholas Gyeney is suitably proud, where Manu Bennett takes on sixteen opponents in the lobby of a building (apparently the Seattle Town Hall) in a ferocious hand-to-hand combat sequence that was all filmed in a single eight-minute take.