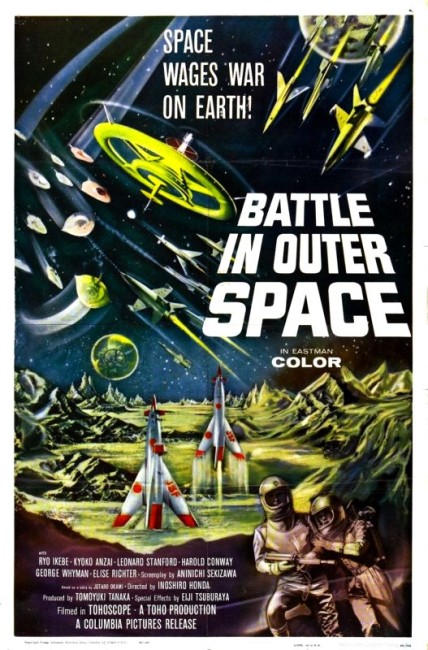 aka The World of Space
(Uschia Dei Senso)

In 1965, Earth is suddenly attacked by aliens from the planet Natal who cause mass devastation with an anti-gravity ray and via sabotage caused by mind-controlled humans. Humanity launches two rocketships to attack the alien beachhead on the Moon but the mission is endangered by one of the crew who has been taken over by the aliens.

Battle in Outer Space is an amazingly colourful piece of solidly juvenile space opera. It owes a clear lineage to Buck Rogers – indeed the special effects budget and amazingly colourful space battles would surely have made the directors of the original Buck Rogers (1939) serial green with envy. There is not a great deal more to Battle in Outer Space than lots of space battles but they are conducted with a sense of wonder and imaginative vigour.

There are some marvellous raygun battles between flying saucers and lunar tanks. The climax is a grand mass destruction finale in the Japanese tradition, albeit one that seems to have borrowed from Earth Vs. the Flying Saucers (1956) in its blowing up recognizable world landmarks. The film and its marvellously colourful space battles could not have helped but be an influence on George Lucas and Star Wars (1977).