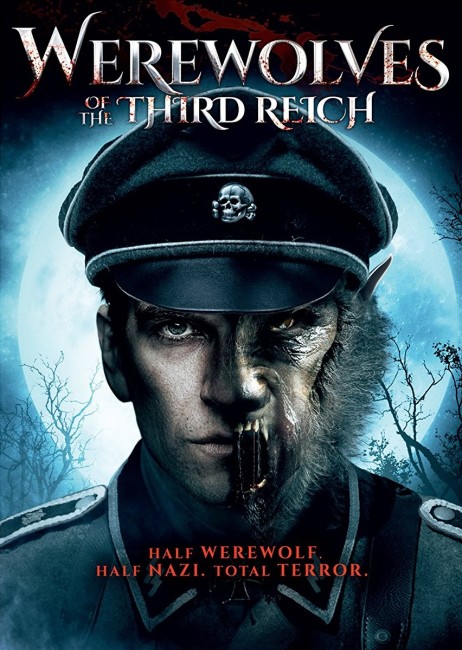 Germany, 1944 in the midst of World War II. Adolf Hitler orders Dr Josef Mengele to produce a new breed of soldiers to aid in the War effort. At the concentration camp run by his wife Ilsa Koch, Mengele begins a series of experiments with a formula obtained from the scientist Dr Hammerstein. Mengele selects Becker, one of the camp’s officers who is having an affair with Ilsa, and injects the formula, turning him into a werewolf. At the same time, a group of American prisoners who have rebelled against military authority are being taken away for sentencing when the truck comes under attack by the SS. ‘Mad Dog’ Murphy kills the Nazis and leads the others in an escape to freedom. Their path takes them to the concentration camp where Murphy’s hatred of Nazis gives him the urge to lead an attack.

One admits to being captivated by the title Werewolves of the Third Reich. It suggests something of what The Keep (1983) was trying to be and a few other films have dabbled with. Or perhaps a full-blooded version of the 2000 A.D. comic-strip Fiends of the Eastern Front (1980) with werewolves instead of vampires. Well that is the promise anyway – the delivery is far from the sensationalism that the title concept suggests.

Andrew Jones seems to have written the film with the idea of crossing over real-life figures of Nazidom who have gained a popularity in fiction. Although there is no evidence that the people ever met in real life, he throws Adolf Hitler together under the same roof with Dr Josef Mengele – best known for his incarnation by Gregory Peck in The Boys from Brazil (1978) – and Ilsa Koch, the real-life wife of a concentration camp commandant who readily tortured prisoners, best known for her highly fictionalised incarnation in Ilsa, She-Wolf of the SS (1974) and sequels. That said, Jones does not appear to have researched the Nazi era very well – he has Dr Mengele and Ilsa Koch married when in fact they were both attached to other parties (it should be noted, for instance, that Koch was Ilsa’s married name).

Werewolves of the Third Reich falls down woefully on the execution. Some of the performances are dreadful, most notably Oliver Fritz who is cast as Hitler despite looking nothing like him or even coming near affecting his mannerisms. While the film makes jibes about Lee Bane’s atrocious German accent, the American accents affected by the various escapees are so broad as to be ridiculous caricatures.

One of the most painful scenes to sit through is one where an SS Officer played by Gareth Lawrence spends the better part of ten minutes trying to persuade David France to put a gun in his own mouth and pull the trigger. Lawrence has a creepy weirdness – his face looks too close together, giving him the appearance of being cross-eyed – and speaks with an extremely annoying and affected quaver of voice, none of which is helped by the scene dragging on far longer than it should have and poor sound recording.

Even more disappointing is the delivery on the werewolf aspect of the title. There are no werewolves in the film until the one-hour point and then only in two scenes. We get a werewolf transformation effect that is pitifully curtailed and woeful in comparison to the still classic sequences from over thirty years ago in films like The Howling (1980) and An American Werewolf in London (1981).

The film sets up a big showdown between the quartet of hard-assed escaped G.I.s and Mengele and the werewolves but this weakly plays out with a handful of people shooting at each other in what looks like an abandoned building. You also keep wondering for what is supposed to be a concentration camp, how come the entire facility seems to manned by about three guards and have only half-a-dozen prisoners.

The film also displays the bizarre twists of morality required in order to have Nazis as sympathetic characters. Ilsa is introduced and in her first scene is taunting prisoners about her (real-life) nickname ‘The Bitch of Buchenwald’. At the end of the scene, she is admiring one prisoner who is tattooed and a few scenes later we see that she has had him skinned and turned into a lamp (one of the few section that approaches something of the real-life activities that Ilsa was known for). On the other hand, the latter half of the film requires that Ilsa be treated sympathetically as her lover is transformed into a werewolf by her husband. The moral contortions required of between one end of the film and the other seem frankly bizarre.