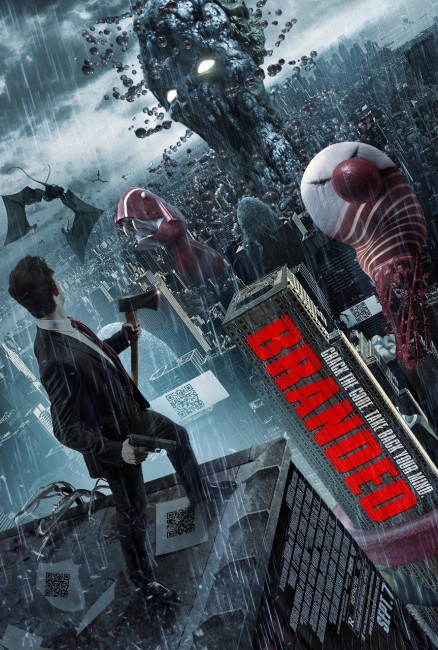 Misha Galkin is the top marketing expert in Moscow. He is drawn to Abby, the daughter of his American boss Bob Gibbons, who is possibly a CIA agent, and the two engage in a relationship despite her father’s express wishes. She asks Misha’s help in producing a reality tv series about extreme fat loss surgery. However, this becomes a disaster when the model goes into a coma during the final operation. Blamed for this, Misha is jailed, although is eventually exonerated. Six years later, Abby finds him now living in the remote countryside as a cattle herd. He has a vision in a dream and sacrifices a cow. Abby brings him back to Moscow where she reveals that she became pregnant to him and gave birth to a son. However, as a result of his vision, Misha is now able to see that the brand names he once promoted are invisible entities that thrive by driving people to want more. This proves too crazy for Abby and she leaves. Misha sees that his mission is now to create something that will devour and destroy all the other brands.

Branded is a feature film collaboration for American Jamie Bradshaw and Russian Alexander Doulerain. Both had worked in marketing departments around the world. The two collaborated on the short film The Offshore Reserves (2004), which has many similarities to Branded in its plot about a woman who has hallucinations upon seeing money and travels to Russia to escape these. Doulerian had also previously co-directed the Russian science-fiction film Ivan the Idiot (2002).

Branded is a very ambitious film. It has big ideas, it tells a story that doesn’t slot into a standard Hollywood formula but is more like a novel in the way that it starts in the protagonist’s childhood and takes you through the development of who he becomes. It wheels ambitious plot devices – the depiction of a near-future Russia, a satiric take on the media, advertising and reality tv.

And it is all put together with considerable visual flair – even watching it on the small screen, it looks designed to play out on the big screen. The effects with which present-day Moscow has been tricked out with almost but not quite recognisable brand names everywhere are subtly and effectively done.

But then we come to the second half of the film where Branded just gets weird. After a big career blow out, Leelee Sobieski finds Ed Stoppard living in the remote Russian countryside as a sheep herd. He wakes up from a dream and creates an animal sacrifice on a giant wooden platform and covers himself in the ash. Once he returns to the city, he then finds that he can see entities that are like giant, sinister coloured blobs hovering over people and stretching up in the air but are invisible to everyone else like. These are the physical manifestation of brand names, which are alive and treat people like puppets to make them buy more.

Full marks here for the sheer outlandishness of the concept but it is also one that leaves Branded tripping off to la-la land. It feels like some demented take on They Live (1988) where the writers tried to shoehorn a satire about modern advertising onto it but let their weirdest ideas get the better of them. It is a shame that Branded goes so off the rails as it starts out seeming like a smart and astute film with much to say.