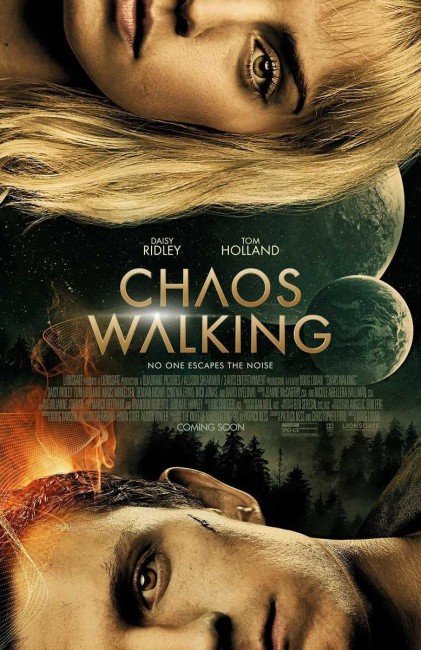 The year 2257 where humans have settled on a planet they have named New World. The planet creates a peculiar condition that causes the thoughts of men to become visible as sounds and colours, which they call Noise. Some have learned to mask the Noise to varying degrees. Todd grows up on his adopted father’s farm in Prentisstown. All the women of Prentisstown have been killed by the planet’s native aliens The Spackle. A probe from an approaching Earth ship arrives but burns up during atmospheric entry. Todd finds the sole survivor from the craft near the farmhouse and is startled because it is the first girl he has seen. He takes the girl Viola to Mayor Prentiss but she makes an escape. Todd finds her hiding in the barn and flees with her as Prentiss and the townspeople come in pursuit. As they make their way through the woods to seek refuge at the nearby settlement of Farbranch, Viola tries to adjust to being on a world where she can see Todd’s thoughts manifest, while Todd comes to realise that what he knows of the world is very different to the reality.

Chaos Walking is adapted from a trilogy of Young Adult books from American-born, British-resident author Patrick Ness. The books, which consist of The Knife of Letting Go (2008), The Ask and the Answer (2009) and Monsters of Men (2010), are set on a world where thoughts are manifest. The film adapts the first of these and Ness co-writes the screenplay. Ness’s work had previously been adapted to the screen as A Monster Calls (2016) based on his award-winning children’s book. Elsewhere, Ness served as the producer and writer of the short-lived Doctor Who spinoff series Class (2016).

The film had a difficult production history that dragged out through most of the 2010s. These include scripts by Charlie Kaufman and with Robert Zemeckis at one point being rumoured to direct. The film we have was originally shot in 2017 but then sat in limbo for nearly four years due to poor initial test screenings. The main problem with the delay seems to have been the need to wait for openings in the schedules of Tom Holland and Daisy Ridley to reshoot scenes due to their commitments to various Star Wars and Spider-Man films. The film finally appeared to indifferent response and negative reviews.

The film comes from Doug Liman who emerged in the late 1990s with smart indie works such as Swingers (1996) and Go (1999) then proved himself in the commercial mainstream with hits like The Bourne Identity (2002) and Mr. & Mrs. Smith (2005). He had less success with his first genre outing, the teleportation film Jumper (2008) but then made the fine Tom Cruise timeloop film Edge of Tomorrow (2014). In genre material, he has also produced the George R.R. Martin tv series Nightflyers (2018).

I have sympathies with the problems that Chaos Walking went through. The main issue the film has going against it is that the central premise of a world where people’s thoughts are constantly manifest is not an easy concept to convey cinematically. To his credit, Doug Liman does so in a way that is consistently interesting. On the other hand, I can only think of how someone who approaches the film with a blank slate might end up getting confused by the complex set-up that the film requires – in first trying to grasp the idea of visualised thoughts and a community without women and then discovering that this is not the truth either.

I thought the world-building that went into the film made it undeniably interesting. The visual depiction of the thoughts manifest is done in a way we have never seen telepathy presented on screen before. The film held my interest through its set-up, getting its two characters on their journey into the wild and introducing aspects like the hostile species of alien natives, the other community and then Tom Holland undergoing a Conceptual Breakthrough to realise that what he understand about the world is not the truth. It is all good potential material for a Young Adult story – I was constantly reminded of the not-dissimilar The Giver (2014) – if not a strong and worthwhile science-fiction film.

Certainly, you are left with a number of questions about the world that are left unanswered or perhaps avoided by the film. We see Tom Holland’s thoughts constantly betraying a desire to kiss Daisy Ridley and her brushing him off with tolerant amusement. You suspect if the film adhered in any way to real life that the men would be walking around having far more vividly pornographic dreams than they do – but then I suppose we are watching a PG-rated film. Although this does leave you with the interesting question of how people would manage to have any kind of sex life in this world – like the how difficult it might be trying to betray thoughts of say the neighbour’s wife/husband or the hot secretary at work in the heat of passion. For that matter, in a society where there are no women, why have homosexual relationships not become the norm among the men who remain?

On the other hand, a promising set-up pans out into something far less interesting. While the first half of the film is all world-building, the second half becomes no more than a chase film with the two lead characters on the run and assorted villains trying to recapture or silence them. There is a lot of running around, although there is at least a cool-looking giant abandoned spaceship where the climactic scenes take place.

The film reaches an ending that leaves a whole bunch of plot loose ends unexplored, the legacy of adapting a book that is the first in a series where there will never be any further chapters. There is the building tensions with the Spackle, which should emerge into war and their enslavement according to the subsequent books; Mayor Prentiss’s overthrow of Farbranch; Todd learning the truth about what he has been told. Here instead we get a bunch of enforced wrap-ups that are not in the books with Mads Mikkelsen’s mayor being killed in a fight around the abandoned ship and then Tom Holland abruptly coming around in the settlers’ ship after it has landed with the implication that all is now well. It feels not unakin to the forced upbeat ending one that was tacked onto the original release of Blade Runner (1982).