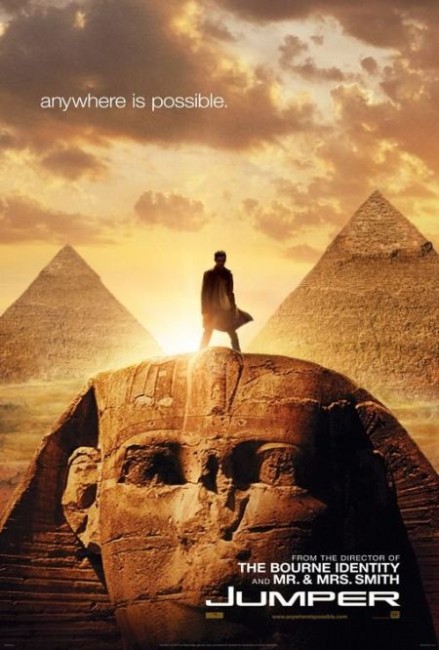 At school in Ann Arbor, Michigan, 15-year-old David Rice presents Millie Harris with the gift of a snowglobe but bully Mark Kobold throws it out onto a frozen-over river. Venturing out to get the globe, David falls through the thin ice. Instead of drowning, David is startled to find suddenly himself in the middle of a library. David realizes that he has the ability to mentally teleport himself to anywhere that he is thinking about. Leaving home, he sets up an apartment in New York and teleports into a bank vault to take all the money he wants. Eight years later and David is enjoying a lavish lifestyle, teleporting wherever he wants in the world. The mysterious Roland then suddenly turns up in David’s apartment. Roland knows about David’s abilities and has tools that can lasso and prevent him teleporting but David makes an escape. David goes back to renew his relationship with Millie who believed he was dead. He takes her on a flight to Rome but once there finds himself pursued by Roland’s men. In the midst of this he is aided by Griffin, a fellow Jumper. Griffin explains that Roland is a member of the Paladins, a mysterious organization that has hunted and eliminated the Jumpers throughout the ages. David presses a reluctant Griffin to help him as Roland targets Millie as a means of capturing him.

Jumper was a high-profile release that came with a good deal of talent arrayed behind it. In the director’s chair there was Doug Liman, a smart edgy director who is always worth watching with films like Swingers (1996), Go (1999), The Bourne Identity (2002) and Mr. and Mrs. Smith (2005) behind him and a fine subsequent venture into science-fiction with Edge of Tomorrow (2014). Liman is set to return to genre material with the upcoming Chaos Walking (2019), plus also produced the George R.R. Martin tv series Nightflyers (2018). The trio of writers on the script include some strong names, including David S. Goyer, one of the finest genre writers around with works like Blade (1998) and sequels, Dark City (1998) and Batman Begins (2005) under his belt; Jim Uhls who wrote Fight Club (1999); and Simon Kinberg, who did write Mr. and Mrs. Smith for Liman, although also has the black marks of xXx: State of the Union/xXx: The Next Level (2005) and X-Men: The Last Stand (2006) against him and subsequently became a regular writer/producer on the X-Men films.

It is a considerable surprise then, with so many impressive names in the creative mix, as to why Jumper ends up as such a non-film. There is a semi-interesting concept to the film – indeed, David almost seems like a character ripe for recruitment into the X-Men franchise or as one of tv’s Heroes (2006-10). On the other hand, there is limited potential to watching people spending 88 minutes teleporting around the world. The unfortunate thing is that Jumper does nothing with the concept. After I saw the trailer, which sets up the concept – youth discovers he can teleport anywhere then finds he is being pursued by a nemesis – I was waiting to see what twists or conceptual spins the various scriptwriters would put on the idea. The great disappointment about Jumper is that that is it – the entire film can be summed up by watching the trailer.

Even then, Jumper could have worked if Doug Liman had made it into a decent action vehicle or kept the suspense tightly ratcheted as he did in The Bourne Identity. However, neither turns out to be the case. There are numerous scenes with people teleporting back and forth to novel locations; some cute scenes where Hayden Christensen and Jamie Bell are teleporting about in a sports car; and a busy climactic fight between Jumpers and Paladins – but the sequences lack any big wow factor and fail to stir the adrenalin anywhat. The script fails to deliver any interesting twists, while the major suspense situation that drives the bulk of the film – Hayden Christensen putting Rachel Bilson on a flight from Rome back to Ann Arbor and racing to prevent Samuel L. Jackson from getting to her in the eight hours before the plane touches down – feels a situation that has been contrived by the scriptwriters.

Moreover, the characters seem either bland or severely underdeveloped. To his credit, Hayden Christensen emerges with far more handsome charisma and screen presence than he did in either of his universally derided performances in the Star Wars prequels. However, the romance between he and Rachel Bilson coasts by without the slightest engagement. It is hard to buy her as a character – one minute she is doing a double-take when a guy from her childhood that she thought was dead suddenly turns up, then without even the slightest explanation he persuades her within the space of a few minutes to abandon her job and fly with him to Rome. The film’s greatest credibility gap though is surely that she continues to accompany a guy who for much of the film only answers every question and doubt she has with an evasion.

This credulity is stretched even more when it comes to the characters played by Jamie Bell and Samuel L. Jackson, about whom nothing is explained at all. The screenplay keeps hinting at a larger mythic structure – not unakin to the secret wars of the ages that we see in the Highlander and Underworld series. Exactly who the Paladins are and for what reason they perceive the Jumpers to be a threat is never explained.

There is no explanation of why only some people inherit the Jumper abilities. When Hayden Christensen reconciles with his mother Diane Lane at the end, she talks about how she had to abandon him because she was a Paladin and saw that he was a Jumper. This implies that being a Paladin is genetically inherited but nothing is ever done to explain what the difference between a Paladin and a normal human being is. That the bulk of Jumper‘s premise hangs on these questions, it is deeply frustrating that it chooses to do nothing in terms of explaining any of its background. It feels like a film that coasts by solely on a series of dramatic cues demanded by market research – handsome star, a touch of romance, flashy special effects, incongruous use of international locations – and has excised all other demands beyond that.

The other major quibble I have is a scientific one. I can grant the film the adequate suspension of disbelief to accept the idea of teleportation as a psychic ability. (The film never goes into explaining how the process works, which is probably wise). The most amusing side unintentional effect would come in that different parts of the Earth rotate at different speeds – the Earth might be likened to a spinning record or cd where the outside of the disc must travel at a faster velocity than the inner edge in order to have the same number of rotations. Similarly, with the Earth’s rotation, an object travelling at the equator has a higher relative velocity to an object at one of the Poles – a person at the equator travels about 1500 feet per second, while someone at the poles is hardly moving at all. Thus whenever Hayden Christensen teleports from say Egypt (which is near the equator) to say Ann Arbor or London (which are quite a bit further north), he would end up with considerable surplus inertial velocity. One calculates that a jump from Egypt to Michigan would leave Hayden Christensen with around 350 miles-per-hour extra velocity, which would probably be enough to propel him through the wall of Rachel Bilson’s apartment and into the next one too.

Doug Liman has announced a sequel with Jumper 2, although this has yet to emerge. Jumper was parodied in Disaster Movie (2008).