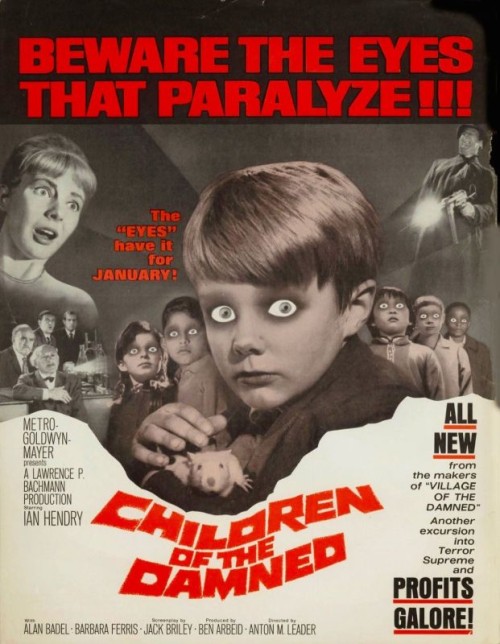 Psychologist Tom Llewellyn and geneticist David Neville become fascinated when a new standard of international intelligence tests show that Paul Looran, a British boy, has amazing mental abilities. As they investigate, they discover David is also able to read thoughts and influence the minds of others. The tests also show that five other children from around the world are similarly gifted. These children are brought to England. When the various governments become anxious about losing control of the children, the children band together and take over an abandoned church. When military forces gather, the children use their mental abilities and a giant sound weapon constructed out of the church organ to defend themselves.

Children of the Damned is a sequel to Village of the Damned (1960). Well at least that was the way the film was billed. In fact, it is more a case of two films conducting variations on a similar theme and in actuality the two are quite different films.

In both films there is the central theme of a mentally advanced gestalt of children who become a threat to humanity. Here though there is no mysterious zone that causes everybody inside goes to sleep and all the women to wake up pregnant, and rather than being alien the children are just a genetic mutation (and are later revealed as an advanced human evolutionary form). The children are not even all blonde anymore, although their eyes do glow (an effect that was later optically added to some prints of Village of the Damned). Even the location has changed – there is no longer any titular ‘village’, the setting has become urban London.

Even more so, the depiction of the children has changed. Here they are no longer sinisterly malevolent, but merely misunderstood. Where Village of the Damned was a variant on Invasion of the Body Snatchers (1956) and its subgenre of alien takeover films about the alien subverting the human norm, Children of the Damned merely belongs to the type of alien contact film personified by The Day the Earth Stood Still (1951) and Star Trek (1966-9) about defusing the xenophobia and prejudice that is seen as likely to rise to the surface in any potential contact between humanity and the alien.

This focus makes Children of the Damned a far less interesting film than Village of the Damned. It lacks any of the sinister thrill and eerie alienness of the original. Certainly, the film starts in well, shot in the tight, constrictive black-and-white tension associated with British thrillers of the 1960s. This soon slows down as the film becomes tediously bogged down in the ethical debate about killing the children. Here you can easily see the contrast between Village of the Damned and Children of the Damned – one is an eerily paranoid film, the other a dull ethical debate.

This in itself might not have been so bad, but the ending is a lame cop-out that avoids having to take any moral position on the issues raised by the script – the children are accidentally blown up in the church due to mixed up commands among the assembled military ouside. It is an ending that allows both the xenophobic side off the hook by eliminating the children without having to deliberately choose murder, while it also avoids the conceptual challenge offered by the question of whether humanity can co-exist with a superior alien force.

The science is also badly written. The talk about evolutionarily advanced blood consuming ordinary blood cells is nonsense, and elsewhere the film offers up the ludicrously improbable notion of having the children build a deadly sonic weapon out of merely a disused church organ.