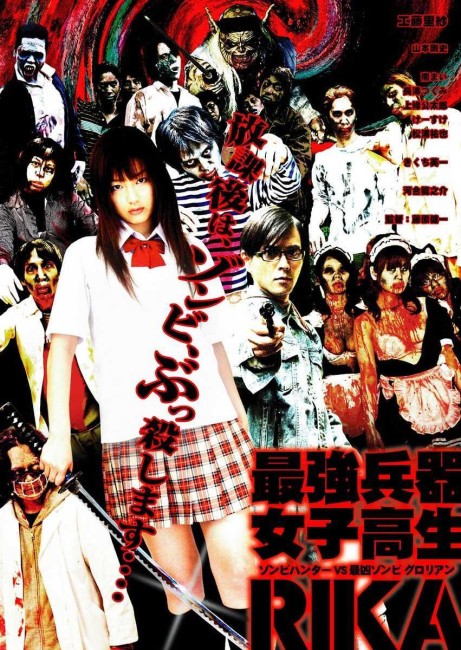 High school student Rika Kosaka and her friend Nami go to Kofumachi to visit her grandfather Ryuhei, a brilliant surgeon. As they set out, they find zombie hordes everywhere in the streets. They are saved by a guy Tomoya who joins them. They arrive at Rika’s grandfather’s place to find he has married a younger woman Sayaka. She informs them that Ryuhei is in an advanced state of dementia. What they do not know is that Sayaka and Tomoya are lovers and have been feeding Ryuhei a drug that addles his wits with the intention of stealing his money. Just then the house is attacked by zombies. Ryuhei regains his wits to fight the zombies off with a samurai sword. In the process of doing so, Rika is bitten and Ryuhei makes the choice to sever her arm to prevent infection. They are aided by Takashi, a scientist who has been bitten but has a way of controlling the spread of the infection. He tells them how the zombie outbreak was caused by a government-created euthanasia drug. To stop the outbreak they need to kill the lead zombie Grorian, which will cause all the other zombies to revert to normal. Ryuhei then takes a severed arm that holds a sword and transplants it onto Rika’s stump. She finds that holding the sword gives her the powers of a predestined zombie hunter.

High School Girl Rika, Zombie Hunter would appear to be an entry amid the Gonzo Japanese Splatter Film fad. What I was hoping before sitting down to watch is that we would be in for a film that hit the tone of something like Bloody Chainsaw Girl (2016). However, director Kenichi Fujiwara never quite finds the manic cartoonishness and dementedly over-the-top approach of any of the aforementioned Gonzo Japanese Splatter Films. For one, the film seems hampered by a low budget, which prevents it from serving up the over-the-top makeup effects and transformations in which these films specialise. Rika’s transplanted arm, for instance, looks exactly like a set of the fake muscles you buy from a Halloween store.

The film gets there in occasional moments, in particular with the madcap character of the zombified scientist and during some of the latter scenes with Lisa Kudo going into action but it is fairly bitsy. There are moments of splatter – some of which looks very cheap, particularly during the initial attack in the streets. If anything this goes for more the adolescent male focus of Attack Girls’ Swim Team or Big Tits Zombie, having Tsugumi Nagasawa and the three maids all get topless within minutes of introducing them.

The concept, which seems to be trying to create a zombie-hunting equivalent of Buffy the Vampire Slayer, is not the most gainly one. And the story rationalisation about inherited swords and hereditary zombie hunters is a paper thin one, as is the talk about the experiments created by a euthanasia drug. Lisa Kudo looks rather pouty and sour-faced and fails to quite inhabit the role of Rika in the larger-than-life way you feel it should be played.

Elsewhere, director Kenichi Fujiwara has mostly made action and crime films. In genre material, he also made Female Prisoner No. 701: Sasori (2011), the reboot of a 1970s series about an escaped woman prisoner seeking revenge, and the future-set action films Iron Girl: The Ultimate Revenge (2016) with a cyborg heroine and Lady Ninja: A Blue Shadow (2018).