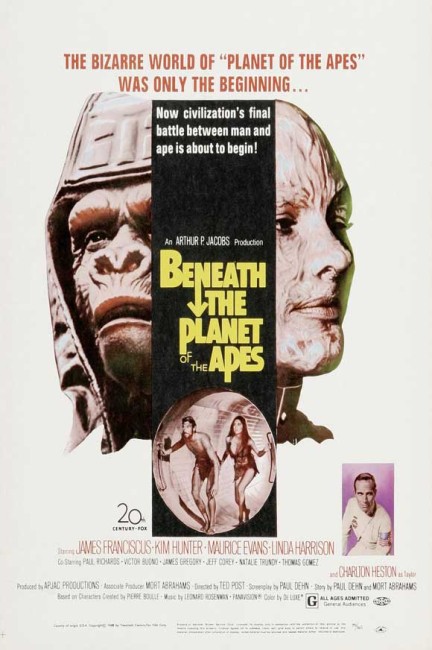 A second expedition that has been sent to search for Colonel Taylor’s mission duly ends up in the ape-ruled future. The sole survivor of the expedition Brent encounters the apes and eludes capture with the help of Cornelius and Zira. In the desert, Brent stumbles into the ruins of New York City where he becomes a prisoner of mutants that worship an atomic bomb who make him a helpless pawn of their psychic powers.

Initially, it does not seem that way. The film starts out seeming a slavish and unimaginative copy of Planet of the Apes – another astronaut is stranded on the future Earth, encounters Cornelius and Zira, runs afoul of close-minded apes and a gorilla general and eventually discovers that he is on a future Earth.

Ted Post’s direction is pedestrian and he never enervates the action sequences as Franklin Schaffner did in the original. Nor does the dialogue have the acerbic misanthropy that Michael G. Wilson and Rod Serling gave the original. For the most part, Beneath the Planet of the Apes merely sets out looking like a pallid imitator determined to tediously follow the original at every point.

Nevertheless, when the film gets into its second half it starts off on some strikingly original directions of its own. The scenes moving through the dead city have a haunting atmosphere. Humming noises that become overpowering then stop into empty silence, fountains of dead brackish water that suddenly come to life. Here Ted Post creates an eerie, otherworldly ambience.

The scenes with the mutants telepathically playing with James Franciscus get into some incredibly weird headspace. There are few films about telepathy that so effectively succeed in conjuring a sense of eerie superiority and baffling implacability – Ted Post does so simply by showing the effects of everything externally, where we only hear James Franciscus’s side of the dialogue.

However, it is the film’s moments of dark satire that succeed in making Beneath the Planet of the Apes memorable. There is the church service scene where the mutants pull away their human face-masks to reveal their radiation scarred faces beneath, while joining in a chorus, “All things bright and beautiful, the Lord Bomb made them all,” giving praise and honour to an atomic bomb that sits as the centre of the altarpiece. It is an image that strikes a dark, vivid satirical note that is as strikingly original and every bit as memorable as the twist that came at the end of the first film.

James Franciscus is wooden, but Kim Hunter and Maurice Evans repeat their respective roles well, while James Gregory is good as the gorilla general Ursus. Roddy McDowall is missing this time around – McDowall was busy directing the interesting fantasy film Tam-Lin/The Devil’s Widow (1971) and was replaced by David Watson (although McDowall would return for the subsequent three sequels and the live-action tv series).

Charlton Heston returns at the beginning and end to reprise the role of Taylor. He was reluctant to play in a sequel, but producer Arthur P. Jacobs convinced him that the film would not fly without him – Heston signed up on the agreement that Taylor would be killed off at the end and claims to have come up with the notion of destroying the world as a means of preventing any further sequels.

John Chambers adds the effective mutant masks to his repertoire and even takes his superlative work on the ape masks one step further in showing nude full body apes. The film cut costs by reusing sets from the original and shooting the dead city scenes on sets leftover on the Twentieth Century Fox lot from the musical Hello, Dolly (1969) and the results achieved are striking. The effects work, especially the matte work recreating the ruined city (which was economically conducted by using photographic cut-outs of the real New York City), is especially good.

This was one of a handful of films made by director Ted Post. Post had begun directing in the days of early live television and worked on classic shows such as Gunsmoke, Perry Mason, Wagon Train, Rawhide and Peyton Place as well as classic genre anthology shows like The Twilight Zone (1959-63) and Thriller (1960-2). He directed such films as Hang ‘Em High (1968), the Dirty Harry sequel Magnum Force (1973) and Go Tell the Spartans (1978). Within genre material, Post also made the unusual alien visitors tv movie Night Slaves (1970), which also paired him with James Franciscus; the weird psycho film The Baby (1972); and the chemical warfare comedy Whiffs (1975).