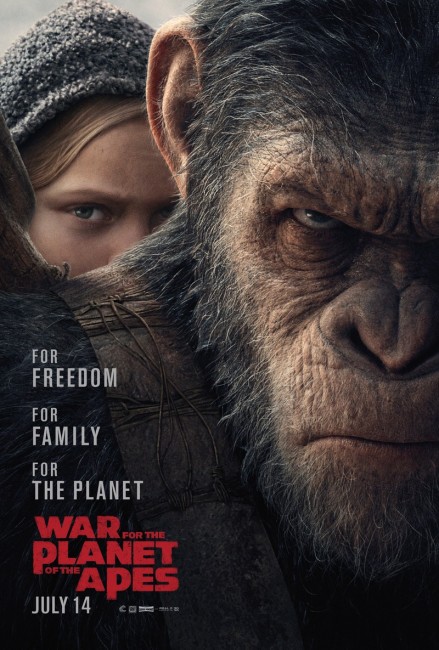 Caesar and the apes are hunted by human soldiers led by The Colonel, along with several apes that have become subservient to them. After a sortie finds them in the woods, Caesar refuses to kill the soldiers and instead sends them back, saying he does not want war. Other soldiers break in to the encampment and Caesar discovers The Colonel has murdered his wife and son. Caesar sends the rest of the apes far away to safety while he sets out on a path of vengeance to kill The Colonel. Maurice, Luca and Rocket accompany him. Maurice insists they bring along a young mute child after Caesar shoots her father. They find The Colonel’s compound where apes have been enslaved to build a wall against the arrival of forces from another human contingent that The Colonel has rebelled against. Caesar is captured after trying to stir the apes to rebellion. He becomes aware that The Colonel is attempting to ruthlessly eliminate all who are infected with a virus that is causing humans to regress and become mute.

War of the Planet of the Apes follows the habit established by the two previous entries of reworking elements from the original 1960s/70s series. The titular war sort of shadows the conflict between apes/humans and mutants that we had in Battle for the Planet of the Apes. Woody Harrelson’s bald-headed general looks somewhat similar to Severn Darden’s Inspector Kolp in Battle, while his relationship with Caesar and maintenance of an enslaved ape population is reminiscent of Don Murray’s Governor Breck from Conquest.

We get the introduction of characters who have played parts in the earlier 1960s/70s films – Caesar now has a son he names Cornelius; and the mute child that Maurice adopts is given a ornamented buckle that says Nova with the implication that she will become the equivalent of the woman that accompanied Charlton Heston in the first two films.

The major new plot point we get this time is the introduction of a virus that is rendering humans mute leading to the ape-dominated future that we saw in the 1968 original. You could even draw a comparison between the oval underground tunnels covered in graffiti that we have here and those in the underground ruins in Beneath. There is also the proposed journey across a vast reach of desert that the apes start out on here and seem to have reached by the end, which you could imagine becoming The Forbidden Zone in successive chapters.

Matt Reeves, previously the director of the J.J. Abrams produced Found Footage monster movie Cloverfield (2008) and the English-language version of Let Me In (2010) before joining the series with Dawn of the Planet of the Apes, is back. In both of his Planet of the Apes films, Reeves does extraordinary things. War of the Planet of the Apes is certain to be overlooked at awards time but this is motion capture technology at the absolute peak of the form. Even more so than before, the apes become amazingly detailed and expressive characters. At least three-quarters of the characters on screen are apes – and there are almost no scenes where they do not appear. Each comes with a distinctive character and range of expressions.

I awarded Andy Serkis and the accompanying army of CGI artists the Best Actor award on the site’s Best of 2014 Awards and could just as easily do so again, even though the film leaves you confused as to whether you are watching an actor performing or CGI artists creating what is essentially an animated character. It is both and neither at the same time, some completely new synthesis of both. The range of expressions that play across Caesar’s face as we see his hurt turn to rage at finding The Colonel has killed his wife and child make for extraordinary acting no matter what you want to call the performance. The same could be said just as equally for any of the other ape performances throughout.

Indeed, the ape performances become such that War of the Planet of the Apes is almost entirely a film that is built up of heart-tugging moments designed to make you go “awww”. My viewing companion was frequently in tears throughout and it was hard to resist the urge to join in. The oddity of the film is that all its beats are soft, tender moments and the big shootouts and explosions that would hold excitement in another film seem almost irrelevant here.

Beautiful, tender scenes like where Maurice comes across young Amiah Miller sheltered in the hut and the genteel wisdom with which he persuades Caesar that they need to take her with them; images like where Luca reaches up and plucks a blossom to place in Amiah’s hair; where Nova brings water and food to where Caesar is locked in a cage; Red Donkey’s eventual rising up against his slavemasters. The final scene of the film is one that will be guaranteed to leave few dry eyes in the house. The maturity of effects technology and depth of emotion that they bring forth make for an extraordinary piece of filmmaking.