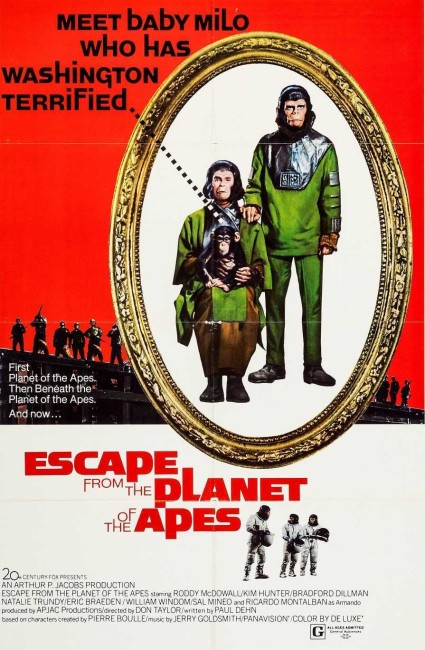 The US military discover Colonel Taylor’s spacecraft splashed down off the California coastline. Inside are the chimpanzee scientists Cornelius, Zira and their colleague Milo who managed to get the spaceship working and have been thrown back through time to 1973. They are placed in a zoo. When it is discovered they can talk, they become celebrities. Presidential scientific adviser Dr Otto Hasslein worries about the ape-dominated future that they speak about and the end of humanity. When it is learned that Zira is pregnant, Hasslein ruthlessly demands the child’s abortion and their sterilization to prevent the ape-ruled future from ever coming about.

First there was Planet of the Apes (1968). This was an enormous hit that mandated a sequel Beneath the Planet of the Apes (1970). This proved to be almost as successful as the first film. After that, producer Arthur P. Jacobs was reputed to have sent screenwriter Paul Dehn a telegram that said “Apes exist, Sequel required.” Under normal circumstances, this would not be too difficult a task – except for the fact that Dehn, purportedly at Charlton Heston’s instigation, had gone and destroyed the entire Planet of the Apes and all the characters at the end of Beneath. However, Dehn proved a writer of considerable ingenuity and came up with this highly inventive time travel story.

Escape from the Planet of the Apes does need to swing some improbabilities and a few continuity cheats in order to swing its concept – namely that the apes from a technologically primitive society can manage get a spaceship working, moreover one that had been left drowned at the bottom of a lake at the start of the first film. Furthermore, the first film had the apes ignorant of Earth’s history and the fact that humanity was once a talking species, yet this film has them citing the history of the talking ape rebellion from sacred texts.

That aside, Paul Dehn swings a wonderfully inventive and literate time travel story. Indeed, Escape from the Planet of the Apes is the best of all the sequels. The time paradox twist ending that finishes the film and sets the groundwork for the rest of the series is an extremely clever touch.

Escape from the Planet of the Apes makes much more use of humour the other entries do. The premise is an inversion of the first film – where Planet of the Apes had a society of talking apes reeling in shock at one talking human, this has contemporary society reeling at the idea of two talking apes. Both films chart similar plot lines – the protagonists placed in zoos where there abilities are discovered by a couple who are sympathetic and interested animal scientists, their existence proving a threat to a scientific ruling elite who want their existence terminated. The film is carried by the wonderfully perky, chirrupy performances from Roddy McDowall and Kim Hunter, reprising their roles from the previous two films. The sense of humour at play whenever they appear together on screen is delightful.

Certainly, they triumph much more so than the relatively wooden human leads – Bradford Dillman and Natalie Trundy. (Trundy was producer Arthur P. Jacobs’ wife, who in fact played as many different roles as Roddy McDowall did throughout the series, this being her most substantial part and only one where she is cast as a human). Eric Braeden is also good as Hasslein. Don Taylor, a tv director who made a number of genre films in the 1970s – The Island of Dr Moreau (1977), Damien: Omen II (1978) and The Final Countdown (1980) – does a relatively pedestrian job.