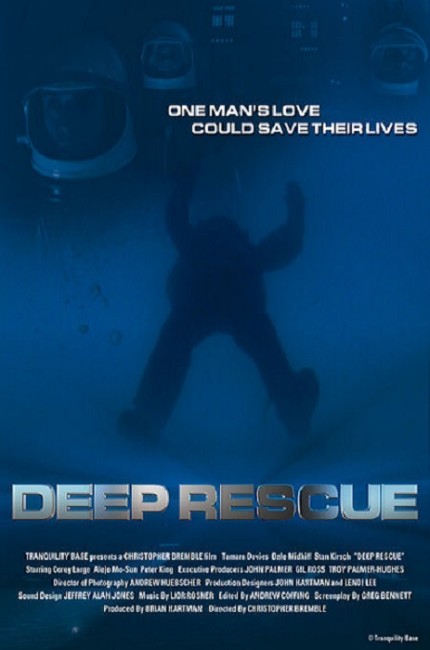 The space shuttle Discovery is returning to Earth when its engines blow out. The mission commander Kevin is forced to dump much of the oxygen supply but is still unable to prevent the shuttle from crashing into the ocean. After skipping across the surface, the shuttle sinks down some 250 feet. The previous mission commander Ben locates them in a mini-sub and announces that he will stay there until the rescue mission arrives in sixteen hours’ time. Ben is crewwoman Amanda’s husband and they have just gone through a painful separation. During the separation, she spent the night with Kevin who is now certain that he loves her. This triangle creates tensions within the confined space of the shuttle. Moreover, it is discovered that Kevin has recklessly used most of the remaining oxygen supplies to protect the shuttle’s satellite payload from seawater, leaving them with not enough air to last until the rescue ship comes.

Deep Rescue comes with the interesting idea of a disaster movie based around the space shuttle. Certainly this is an idea that would make for an interesting big-budget film some day – maybe if some producer ever gets around to filming Kevin J. Anderson and Doug Beason’s novel Ignition (1996). Earlier there was Spacecamp (1986), which was premised around the idea of teenagers trapped aboard the space shuttle in orbit, which failed through mediocrity of treatment. Although in large part, Deep Rescue, with its premise of a shuttle crew trapped aboard on the ocean floor, pushes the film into the same territory as downed submarine dramas like Gray Lady Down (1977) or K-19: The Widowmaker (2002).

Alas, Deep Rescue has the great misfortune to be a disaster movie made on a way-below-miniscule budget. The film has what are possibly some of the worst digital effects of any film that one has seen in recent years, particularly during the scenes with the shuttle re-entering and skipping along the surface of the ocean, which look like no more than the graphics for a computer game circa 1995. The film has also been shot on a series of tight, constricted sets that look very cheaply constructed. (Although you at least have to applaud the economy of the film in managing to contain the entire drama within only three rooms).

On the plus side, the script makes a reasonable effort to deal with the problems of the crash in a scientifically realistic manner. The main problem is not so much this, which is reasonably interesting, but the fact that the personal drama – namely the love triangle between Dale Midkiff and Stan Kirsch for the affections of Tamara Davies – is allowed to take over and dominate the film. This majorly drags out the pace of the show – director Christopher Bremble seems determined to make us feel every single second of the sixteen hours that the rescue crew are supposed to be taking to get to the sunken shuttle. What is missing in all of this, especially for a disaster movie, is a sense of urgency or dramatic tension.

The only name actors present are Dale Midkiff, once the star of Pet Sematary (1989) and tv’s Time Trax (1993-4) and Stan Kirsch, whose only known role has been as the kid sidekick in the tv version of Highlander (1992-7). Midkiff and Tamara Davies do okay. Stan Kirsch plays cold and tightly emotionally bound – but it is a performance where seeing him in command makes it far too obvious that he is going to go off the rails. (For all that, the script fails to offer any credible reason why Kirsch is so recklessly obsessed with protecting the payload at the price of human life).

There are a surprising number of similarities between Deep Rescue and The Abyss (1989). Aside from both being dramas set on the ocean floor, there is the theme of the separated husband and wife to whom the crisis acts as a reconciliation – there is even a copycat scene where the two of them make the decision to drown together. Furthermore, Stan Kirsch seems to have modelled his performance on Michael Biehn’s character in The Abyss – that of the tightly controlled person entrusted with control of the mission who proceeds to lose it.

Deep Rescue was made by director Christopher Bremble. Bremble has made only two other films, both of which demonstrate a fascination with matters NASA and Space Mission related. These were Fallout (1998) about the hijacking of a space station and The Mercury Project/Rocket’s Red Glare (2000) about a group of teenagers who rebuild and launch a working Saturn rocket.