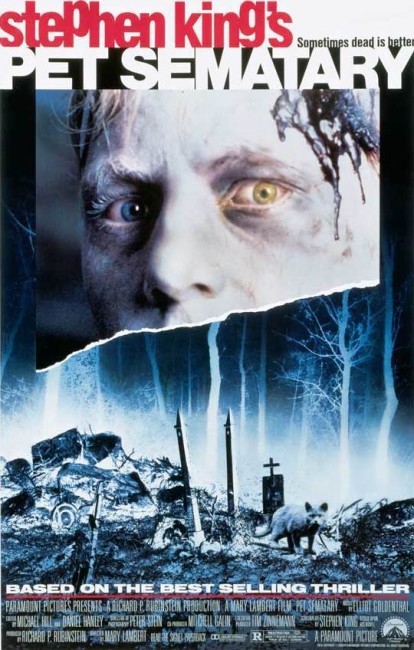 Louis Creed, his wife Rachel and their two children move to a house in rural Maine so that Louis can set up practice at the medical centre on the local university campus. Their cat Church is then run over by one of the vehicles on the busy highway that fronts the property. Louis’s neighbour Judd Crandall shows him the animal graveyard, the misspelled ‘Pet Sematary’, at the end of their property. Crandall tells Louis that if he buries Church in the old Indian burial ground that lies beyond the Pet Sematary, it will return to life. Louis does so and the cat returns alive that night. However, Louis realises that Church is not the same as before. Next their two-year old son Gage is run over by a semi-trailer. In the aftermath of the tragedy, Louis begins to think about the possibility of taking Gage’s body down beyond the Pet Sematary.

There are many Stephen King fans that regard Pet Sematary (1983) as possibly the best and scariest of King’s books. The theme of the parent facing their resurrected child appears to have hit home with many readers. This film adaptation of Pet Sematary was not the first time that Stephen King had written a screenplay but it was the first occasion where he adapted one of his own novels. The film adaptation was mounted by George A. Romero’s former producing partner Richard P. Rubinstein and his Laurel production company – indeed, Romero was at one point attached to direct before parting ways with Laurel. Richard P. Rubinstein and Laurel were also responsible for a number of other Stephen King adaptations including Romero’s Creepshow (1982), Creepshow II (1987), Golden Years (tv mini-series, 1991), The Stand (tv mini-series, 1994), The Langoliers (tv mini-series, 1995), Thinner (1996) and The Night Flier (1997).

It is frequently complained that screen adaptations of Stephen King’s works fail to hold the same impact that they do on the page. Pet Sematary is one such case and is a disappointing adaptation of the book, which in itself was a reworking of the old The Monkey’s Paw (1902) tale. While the book is regarded as a classic, one suspects that there are few that would be prepared to hail Pet Sematary the film as a horror classic or even among the best of the numerous Stephen King screen adaptations.

Mary Lambert’s direction holds few surprises – read the book’s dust cover and you can guess all the twistings and turnings that the film is going to take. Moreover, the return of the Gage character from the dead, reincarnated with a Donald Duck squawk and seemingly patterned after the dummy in Child’s Play (1988), inadvertently topples over into the absurd. To be fair, Mary Lambert maintains some effective scares in the scenes with Gage wielding a scalpel and attacking Fred Gwynne.

Baby-faced Dale Midkiff and lantern-jawed Denise Crosby perform with a competent blandness – the problem is that in Stephen King’s script the characters are virtual blanks and he spends next to no time fleshing them out as people. However, Fred Gwynne (almost unrecognisable from his days as Herman Munster) gives a fine performance as Judd Crandall.

The most interesting part of Pet Sematary is the supernatural aspect – the ghostly promptings and portents from the dead Victor Pascow character, Blaze Berdahl’s prescient dreams interpreted through childspeak and especially the sense in the latter half of the story where events seem to be heading towards a looming apocalyptic confrontation between good and evil. All of these are familiar features of Stephen King’s writing where prescient dreams and half-clues seem to perpetually hover beyond the veil of the mundane. This aspect has been ignored in all other film adaptations of King’s work – seen here on screen, it works to haunting effect. The actual Indian circle, sitting amid the bleak, wintry Maine locations, holds a certain primal terror.

The sequel was the anodyne, although not entirely uninteresting, Pet Sematary II (1992), which was also directed by Mary Lambert. Pet Sematary (2019) was a remake starring Jason Clarke as Louis and John Lithgow as Jud Crandall, although that pointlessly changed the original to have Ellie rather than Gage be the one resurrected.

Mary Lambert had previously come to attention as a music video director in the early 1980s, where she had gained fame with her work for Madonna with videos such as Material Girl and Like a Prayer. Lambert’s previous cinematic outing was the pretentious deathdream fantasy Siesta (1987). Lambert’s work since Pet Sematary, her greatest commercial success, has been uneven with a handful of films and mostly tv work. Her other genre films are the psycho-thriller Face of Evil (tv movie, 1996), the teen psycho-thriller The In Crowd (2000), Halloweentown II: Kalabar’s Revenge (2001), the horror anthology Strange Frequency (tv movie, 2001), Urban Legends: Bloody Mary (2005), The Attic (2008) and Mega Python vs. Gatoroid (2011).