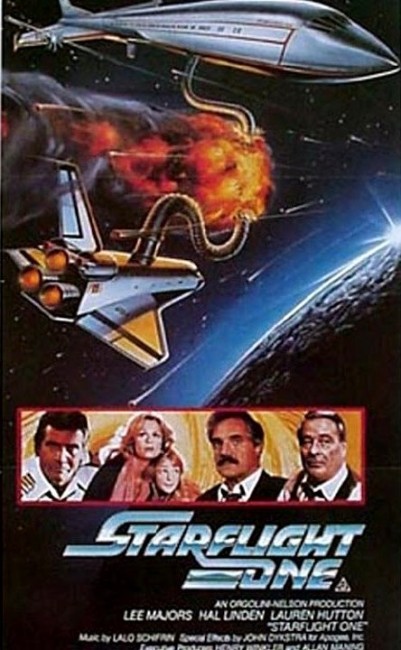 aka Starflight: The Plane That Couldn’t Land

Starflight 1, the first rocket-propelled intra-orbital aircraft, begins its maiden voyage from California to Australia. At the same time, a millionaire orders the test launch of a delta missile but then aborts the launch and self-destructs the missile. Debris hits Starflight 1, jamming its rocketry on and sending it up into space. With Starflight 1 trapped in a rapidly decaying orbit, the NASA space shuttle Columbia is put into operation to attempt a rescue.

Starflight One was a tv movie that was cinematically released outside of the US. It falls into the 1970s fad for Disaster Movies following the massive successes of films such as The Poseidon Adventure (1972) and The Towering Inferno (1974). The film’s conception has been no more than the idea of setting an Airport movie in orbit. The Airport films were some of the most popular among the 1970s fad for disaster movies. Beginning with Airport (1970), the series progressed through the likes of Airport 1975 (1974), Airport ’77 (1977) and Airport 79 – The Concorde (1979) – in all cases winding leaden melodramatics around large-scale airline disasters.

After the big science-fiction boom of the 1970s, there was around 1980 the briefly mooted idea of making an Airport 2001. Although that never emerged, Starflight One could easily be that film. It wields all the big-budget petty melodramas, a B-list of Hollywood stars and even employs director Jerry Jameson who directed Airport ’77 and was responsible for other disaster films such as Raise the Titanic (1980) and several tv movie variants such as A Fire in the Sky (1978).

1983 was the time when the disaster movie was well on its way out, killed off by flops like Irwin Allen’s The Swarm (1978), Beyond the Poseidon Adventure (1979) and When Time Ran Out (1980) and Jameson’s own colossally over-budgeted Raise the Titanic, not to mention the parody of Airplane/Flying High (1980).

Jerry Jameson’s pacing is dull and indifferent, indicative of a creative ennui that had overwhelmed the disaster movie cycle by this point where most successes were regularly being copied in low-budget tv movies. The science is about the level of Thunderbirds Are Go (1966). (This is a film that gives aerospace trivia geeks a field day with their nitpicking – the space shuttle with the two-hour refuel and turnaround time seemed riotously funny to one friend of mine). The characterisationa make one wince – there is a good deal of bad acting from a number of guilty offenders who have since remained in the province of tv movie soap operas.

The only decent thing in the film are the special effects by John Dykstra, then a big name as the result of his work on Star Wars (1977) and who made some bad career choices since. Dykstra’s effects shine amid the drab photography so much so that they seem out of place. It must indicate something when Starflight One can play the same plot seriously that had just been conducted as a send-up by Airplane II: The Sequel/Flying High II: The Sequel (1982).