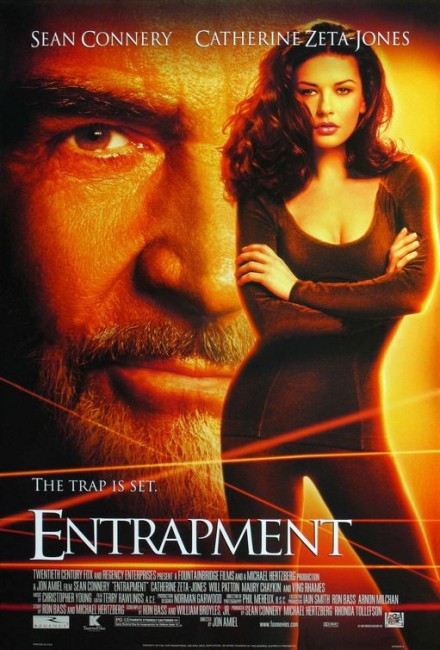 It is sixteen days before the turn of the Millennium. Virginia Baker, an investigator for Waverly Insurance, begs her superior for a chance to go after the world’s greatest thief Robert MacDougal, following the theft of a Rembrandt. She tries to set a trap using her seductive wiles but is outsmarted by MacDougal. He then offers her a partnership in stealing a golden Chinese mask from a guarded castle. She reveals to MacDougal that she is a top thief who has obtained her job in order to get his help for her greatest coup – their combined raid on an international bank in Kuala Lumpur on the point of the Millennial Midnight, using the Millennium Bug as their cover, a heist that will net them eight billion dollars.

Entrapment falls into a long line of the caper thrillers that stretches from the likes of Topkapi (1965) through The Sting (1973) and The Great Train Robbery (1979) to The Grifters (1990). These are thrillers whose principal frisson comes in watching the technical exactitude of planning and executing a large-scale heist and/or watching it go wrong. Entrapment is reviewed here because it has a future setting of about seven months from its release date – that is to say the last two weeks of 1999 – and the vaguely futuristic gimmick of setting the heist around the Millennium Bug. Of course, the use of the Y2K bug is a spurious gimmick that is entirely exploitative of the media fascination with the projected social downfall and so on that would occur on the turn over of dates.

The fact that Entrapment became a No 1 box-office success – until it was bumped off by Star Wars Episode I: The Phantom Menace (1999) – is a testament to a slick publicity presentation triumphing over content. Entrapment sold itself as a sexual thriller. With its suggestive title and a poster campaign that features the two stars – a full-figure shot of Catherine Zeta-Jones in a figure-hugging catsuit outlined against a background of Sean Connery’s face and the legend “The trap is set” – the film’s entire selling point has been less as a sophisticated hi-tech caper thriller than it has as a psycho-sexual thriller along the lines of Basic Instinct (1992).

Maybe in awareness of the potential ludicrousness of a forty year age gap in the romance between Sean Connery and Catherine Zeta-Jones, the film is in actuality a complete cheat on everything its marketing machine tries to sell it as. Despite being the film’s selling point, the on-screen sex appeal is entirely limited to a cuddle between the leads and whatever titillation the sight of watching Catherine Zeta-Jones doing acrobatics in a catsuit may hold. In terms of steam, it raises about as much as a puff of air on a cold window pane.

Despite the promise it holds, Entrapment is a surprisingly dull film. Director Jon Amiel’s previous film was the excellent serial killer thriller Copycat (1995) and some time before he had directed the Dennis Potter tv classic The Singing Detective (1986), but here Amiel directs in the most perfunctory way. The script is formulaic but at least has enough twists and turns that a competent director could have made it hum with tension. However, under Jon Amiel’s hand, the plot and the two caper set-pieces take place with almost nothing in the way of affect.

The more you sit watching the film, the more you begin to realise it has been slung together only as a calculated marketing exercise. There is nothing of any depth to it. The characters are faceless – you are never sure right up until the end whether Caterine Zeta-Jones is an insurance investigator or whether she is a world-class thief who has conned her way into the job. Half of the film supposedly hangs on whether she can trust Sean Connery but when we never even know whether she is who she claims to be, it is hard to care either way. You spend half the film asking obvious questions like – if Sean Connery is so brilliant, how come he never works out something so obvious as that she is working for an insurance company? Or how can a mere insurance claims clerk develop such sophisticated acrobatic and thieving abilities? Or, on the other hand, if Catherine Zeta-Jones is such a good thief, why does she have such problems in the basic training for the caper?

Not much of this makes sense in the twist end revelation, which makes all Sean Connery’s piecing together of her identity into nonsense. At the point of the film’s big climactic set-piece with Catherine Zeta-Jones navigating a thin cable between two skyscraper towers while wearing high heels and she and Connery swinging between the towers on a wire held on only by one screw, you suddenly realize that this is a film that is not even vaguely interested in making the pretence that this is happening to real people and you cease to care about the preceding two hours.

A far better version of the sexy caper thriller type of film that Entrapment tries to be was produced in The Thomas Crown Affair (1999) later the same year. Jon Amiel next went onto the equally ludicrous and improbability-ridden science-fiction film The Core (2003) and improved with the Charles Darwin biopic Creation (2009).