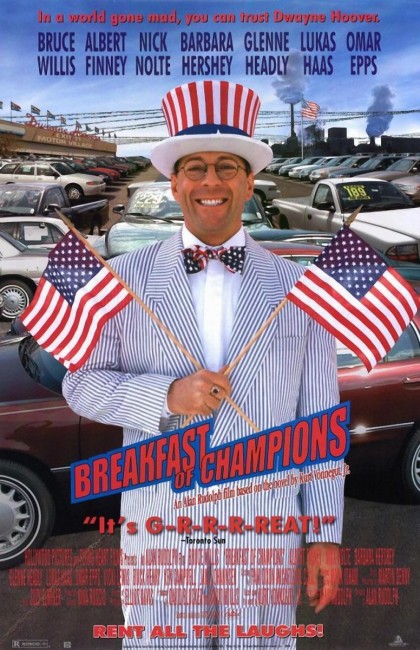 Dwayne Hoover, a successful car salesman in Midland City, is suffering from hallucinations that are driving him to contemplate suicide. At the same time, Dwayne’s sales manager Harry Le Sabre tries to keep his cross-dressing a secret, while just-released convict Wayne Hoobler comes to Midland, believing the similarity of names between he and Dwayne has been destined by God and that Dwayne’s car sales is the promised Fairyland. Meanwhile, Kilgore Trout, an obscure and embittered science-fiction writer who has only ever been published in pornographic magazines, receives a bequeathment from his biggest fan, wealthy Elliot Rosewater, so that he can travel across country and be the guest of honour at the Midland writer’s festival. As Dwayne becomes increasingly unbalanced, he comes to believe that the arrival of Trout will provide all his answers.

Kurt Vonnegut Jr (1922-2007) was one science-fiction writer whose work managed to spill over to mainstream acceptance – even become the subject of academic study – more so than he ever found acceptance within the science-fiction genre itself. Vonnegut’s work is dark and pessimistic yet also bitingly funny. Sometimes undeniably adolescent in its humour, Vonnegut’s recurrent theme is the lamentation of a universe that is either wholly indifferent or seemingly cruelly arranged against he and his characters.

Alas, Vonnegut has never translated particularly well to film. The Coen Brothers aside, American filmmakers rarely seem to ever understand the business of black humour. There were made-for-tv adaptations of Vonnegut’s Between Time and Timbuktu (1972), Welcome to the Monkey House (1991) and Harrison Bergeron (1995) and a terrible cinema version of Slapstick of Another Kind (1982). There was an adaptation of Mother Night (1996) that was well-received in some quarters but this was little seen. The most high profile Vonnegut adaptation was Slaughterhouse Five (1972) but there Vonnegut’s savage chronicle of the Allied bombing of Dresden and the mockeries of a universe where everything is predestined drowned amid miscalculated humour.

At least, Slaughterhouse Five was a better film than this adaptation of Vonnegut’s novel Breakfast of Champions, or Goodbye Blue Monday (1973). In all regards, Breakfast of Champions is a clumsy and clod-fisted adaptation. For biting black humour, director/writer Alan Rudolph – otherwise a director of well-regarded films like Trouble in Mind (1986), Mrs Parker and the Vicious Circle (1994) and Afterglow (1997) – substitutes loud careening farce. Rudolph places the story in a cartoonish world of ever-present advertising and infomercials, used car sales pitches and elevator muzak. One has not read the particular Vonnegut book in question. There are some aspects – Nick Nolte’s crossdressing fetish, Omar Epps as the enthusiastic ex-con – that may have worked through nuances that Vonnegut created on the page but on screen only emerge as cloddingly unfunny. One gets the impression that Alan Rudolph has remained too faithful to the book at the expense of failing to cut aspects that did not translate to film.

Amidst this, the entire cast – and it is a very respectable cast too, including cameos from novelist Tom Robbins and Vonnegut himself playing a commercials director – deliver over-the-top and silly performances. One of the worst offenders here is Bruce Willis, seemingly back in Death Becomes Her (1992) mode and trying to play comedy by rolling his eyes a lot and cravenly cringing. And, as in Death Becomes Her, the results are terrible – Willis’s comedic talents are best when restricted to the flip wit of the Die Hard movies. Around the time that Breakfast of Champions came out, Willis made a big thing about giving up being an action star for more serious dramatic parts and if this is the result, one can guarantee that Willis’s career is going to be heading back down toward the line of flops he had in the early 1990s.

Moreover, in Alan Rudolph’s cartoon world, there is no particular hook for us. We never understand why Dwayne Hoover is hallucinating and thinking of committing suicide. Is one meant to draw the impression that the banality of the cartoonish tv commercial world around him is driving him to it? However, if this world is intended satirically we never get any clear insight into what Alan Rudolph’s intent is – the impression one instead gets is that having a series of sets inundated with advertising banality it is merely part of the grand farce that Rudolph has assembled.

Similarly, we are granted brief glimpses of the fantastique as we see Kilgore Trout’s visions of an otherworldly paradise whenever he looks into a mirror, while at the end, Rudolph has him entering a mirror and going to live in his paradise world as a child again. What this is all about is completely baffling. We are certainly given no clues.

The result is a film that tries to be a satire without giving an audience any clear idea of what it is satirising. As a film, it reduces the works of one of America’s greatest modern satirists to ham-fisted farce that is barely only one step above custard-pie slapstick.

Director Alan Rudolph’s other films of genre interest are:– the obscure Premonition (1972) about students who take a drug that creates precognitive visions; the gory psycho film Barn of the Naked Dead/Terror Circus/Nightmare Circus (1973); Endangered Species (1982) about the cattle mutilation phenomenon; Trouble in Mind (1986) and its quasi-sequel Equinox (1992), film noirs that were set in a vague futuristic world; and the appealing afterlife romance Made in Heaven (1987).