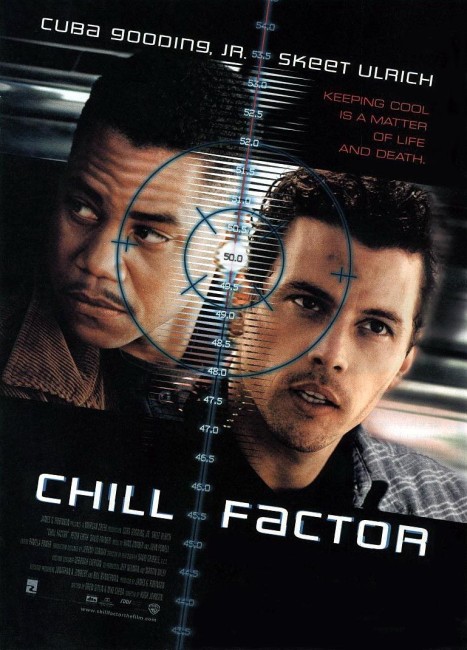 In 1987, an experiment with a new form of chemical weapon conducted by Dr Richard Long goes disastrously wrong and kills a platoon of soldiers. The officer in charge, Captain Andrew Brynner, is made accountable for the mistake and sentenced to ten years in prison. Released in the present day, Brynner comes after Long, seeking revenge. Shot by Brynner, the dying Long gives the supplies of the chemical weapon to his friend Tim Mason, a convenience store employee in Jerome, Montana, with the warning that if the temperature rises about 50 degrees the weapon will destroy everything in a five mile radius. Mason stores the chemicals in ice cream delivery man Arlo’s battered freezer truck and forces him to help him deliver the chemicals to the military at Fort Leavenworth. As they set out, Brynner and his team of mercenaries come in hot pursuit.

Chill Factor patently sets out to imitate Speed (1994). Both films involve a duo engaged in a high-speed chase aboard an ungainly oversized vehicle. In both films, the chase is further hampered by certain conditions (set by the scriptwriters) – in Speed, it was not being able to drive under 50 mph; in Chill Factor, it is not being allowed to let a package rise about 50 degrees in temperature.

While Chill Factor has clearly set out to imitate a previous box-office success, its real (possibly unrealising) source is not Speed as much as it is The Wages of Fear (1953) – a classic French thriller about truck drivers hauling packages of unstable nitro-glycerin across treacherous South American terrain. The Wages of Fear was remade by William Friedkin as Sorcerer (1977), although it is a surprise (or perhaps a testament to producers’ lack of historicity) that nobody has sought to remake it amid the current action blockbuster era.

Chill Factor is strictly average in all regards. The action is competently conducted, striding a line that falls between the believable and the ridiculous. The action is also heavily crosscut with comedy. The principal feature it draws upon here is Cuba Gooding Jr delivering a high-speed motormouth performance as though trying to imitate other action/comedy crossover stars such as Chris Rock and Martin Lawrence. Cuba Gooding’s schtick gets a good many audience laughs, even if the performance comes off so hyperkinetic and fey that it seems more like he should be auditioning for a part as a drag queen.

Skeet Ulrich pouts prettily and moodily, although, as with all of his films so far, fails to make any acting imprint on the film. The best performance comes from Peter Firth who does the tight-lipped thing that makes him seem a complete cold fish in the British period dramas he is often cast in, but which adapts itself well to the part of a larger-than-life action movie villain, despite the tendency of his Southern accent to wander all over the place.

Chill Factor also falls into a body of films over the last few years that have demonstrated an alarming growth in American patriotism told in ardently pro-militaristic terms. This is a trend that began with Rambo: First Blood Part II (1985) and carried on through the likes of Independence Day (1996), Courage Under Fire (1996), The Rock (1996) and The Siege (1998). These are films which seek to rewrite complex military battles such as Vietnam and the Gulf War with heavily simplified, patriotic positive thinking sentiments.

Without ever appearing to try, Chill Factor comes out as strongly in favour of US military might. The effects of the chemical weapon are portrayed in horrific terms – yet the film never seems to question the motives of the good guy scientist who spends a further ten years trying to perfect them or even whether the military is right to use such a weapon in the first place. (Notedly, while the film merely implies that these weapons would be acceptable as long as they are used in the right hands, in actuality such weapons usage would be banned under the Geneva Convention). The person who has the most humane reaction of to the use of this weapon – Peter Firth’s captain – is made into the crazed vengeance-seeking villain of the show. Notedly, Firth has also expressed outrage in the past about the morality of Vietnam and makes appeals to try to stop the heroes doing what they are doing by asking them to consider how much their country has let them down.

Against this, the two heroes are cast as just two ordinary guys doing their duty for their country. The dialectic becomes an extraordinary vilification of militarism – objections to the morality of militarism are portrayed as evil and deranged, while ordinary decency, which apparently doesn’t ask a great many political questions, is seen as just the right thing.

Chill Factor has been the sole directorial outing for Hugh Wilson, a previous cinematographer and second unit director who has subsquently returned to these duties on other films such as The Chronicles of Riddick (2004), Kingdom of Heaven (2005) and Eragon (2006).