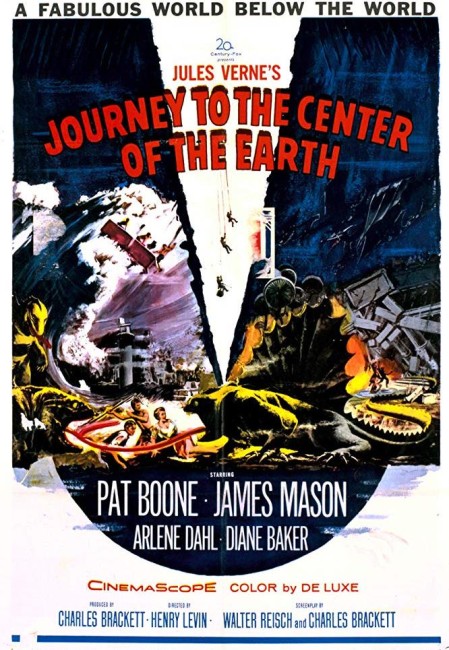 Edinburgh, 1860. When geology professor Oliver Lindenbrook is knighted, his students give him a rock paperweight as a gift to commemorate the occasion. Lindenbrook becomes fascinated with the rock and discovers it contains a plumb-bob that has inscriptions made by the famous explorer Arne Saknussemn showing the way to the center of the Earth. Lindenbrook mounts an expedition, having to brave sabotage and counter-expeditions led by a treacherous colleague. He leads a party down through the volcano Snaffels Yokul in Iceland into an amazing world of crystal splendour at the center of the Earth.

Disney had a big success with their lavish adaptation of Jules Verne’s 20,000 Leagues Under the Sea (1954). This was followed by the David Niven-starring adaptation of Verne’s Around the World in 80 Days (1956) from United Artists, which won the Academy Award as Best Picture in its year. The success of both of these brought on a spate of Jules Verne adaptations in the late 1950s and early 1960s that included The Fabulous World of Jules Verne (1958), From the Earth to the Moon (1958), Master of the World (1961), Mysterious Island (1961), Valley of the Dragons (1961), Five Weeks in a Balloon (1962), In Search of the Castaways (1962) and The Light at the Edge of the World (1971). Alas, what Around the World in 80 Days ended up doing was setting the light, comic tone for the rest of the adaptations. These soon became a series of colourful knockabout period comic romps, something that was the antithesis of Verne’s books, which were intended as serious adventure stories. Indeed, Verne’s work rarely came with a sense of humour at all.

Any connection between this film version of Journey to the Center of the Earth and Jules Verne’s 1864 novel (his second published) must be considered purely coincidental. Verne wrote a dark, claustrophobic Age of Exploration fantasy; the film is a ridiculously opulent Cinemascope colour spectacle. While the book took place in a series of dank and lightless caves, the center of the Earth in the film is depicted as a colourful and well-lit world of studio-floor splendour and crystalline formations.

To the story has also been added optically enlarged lizards dressed up to appear as dinosaurs (one of the few times on film that such an effect has looked convincing). Along for the journey also is a duck; a singing Pat Boone, who takes his shirt off at frequent intervals for little discernible purpose and plays the accordion; and Arlene Dahl, who has the presence of mind to bring a nightdress and be able to retain her perfect makeup composure throughout even when her dress ends up being shredded.

The result is more akin to a 19th Century tea party than serious exploration. At the end, everyone is blown up to the surface through the borehole of a volcano by an eruption riding in an oversize bowl of rock (something that would in actuality incinerate every person) and Pat Boone ends up naked in the branches of a tree at a convent, picking up a goat to hide his lack of pants. There are some silly scenes involving shenanigans with the duck in a barn; and where the explorers encounter a giant mushroom and then decide to dance around the Maypole. Jules Verne’s opening location is switched to Scotland – although, despite the new locale, nobody has a Scots accent.

On the film’s own level of unserious silliness, the underground scenes have a good deal of colour. The spectacle – caves of salt, the crystalline formations, coloured springs, luminescent pools, rock bridges stretching across vast chasms, giant mushrooms, the ruins of Atlantis, roaming dinosaurs and underground oceans – looks undeniably visually impressive. Although there is a certain amount of stupid science supporting it all – where does all the light underground come from, for instance? – and in the talk about magnetic crosscurrents. It is a surprisingly long film (132 minutes) with the early parts being taken up by a long series of subplots involving rival expeditions and kidnappings. Mention should also be made of Bernard Herrmann’s wonderfully epic, sweeping score, which conjures an appropriately wondrous magic.