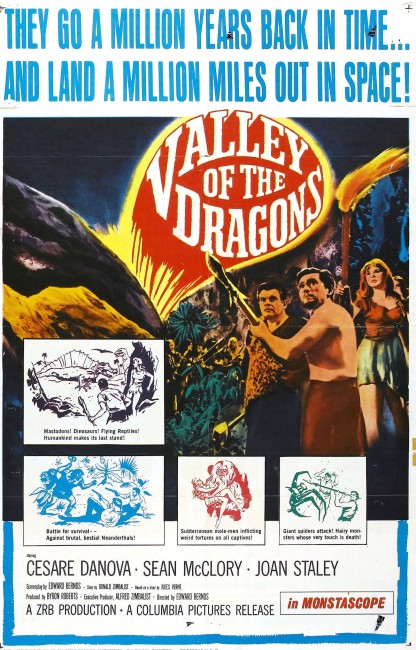 Algeria, 1881. Irish soldier of fortune Michael Denning and French officer Hector Servadac are about to fight a duel over the affections of a woman when the area is rent by earthquakes and terrible storms. They come around to find themselves in an alien landscape teeming with dinosaurs, prehistoric animals and cave people. Agreeing to set aside their differences for mutual survival, they come to the realisation that they have been swept up onto a comet that grazes the Earth every few hundred thousand years.

Valley of the Dragons is based on one of Jules Verne’s less well-known novels Hector Servadac (1877), which is known in English under a variety of different titles including Off on a Comet and, the one this film chooses to list n its credits, Career of a Comet. The original novel concerns thirty-six people near Gibraltar who are swept up during the passby of a comet and find themselves in a strange land that operates by very different laws of physics as the comet travels through the Solar System. The same Jules Verne novel has also been filmed as Karel Zeman’s On the Comet (1970) and the Australian animated Off on a Comet (1979).

When it comes to the film version, Valley of the Dragons has tossed most of the Verne novel out and merely used the shell notion of adventurers whisked away on a comet. The rest of the show has been conducted as a prehistoric lost world adventure – it should be noted by contrast that no dinosaurs or cave people feature in the Verne novel.

Here the filmmakers turn to using footage from One Million B.C. (1940), possibly the most cannibalised film footage in history, and throw in its shots of optically enlarged lizards fighting. (This was characteristic of executive producer Al Zimbalist who made several entire films, Monster from Green Hell (1957), the Denny Miller Tarzan the Ape Man (1959) and Watusi (1959) with stock footage recycled from other films). This has also mandated that Valley of the Dragons be shot in black-and-white, which in 1961 made the film look even cheaper.

The adventures once the group arrive on the comet are standard antics among cave-people dressed in tatty furs amid cheap-looking sets made to look like the interior of caves, as well as cuts away to the optically enlarged lizards and exploding volcanos. This is dreary stuff, even rather ridiculous when it comes to the romance that blossoms between the two modern men and cave women. The film does little with the fascinating original idea of a micro-society that covers various eras of human history all living aboard a comet. Indeed, even the fact that we are on a comet is scantily relayed due to the limited budget.