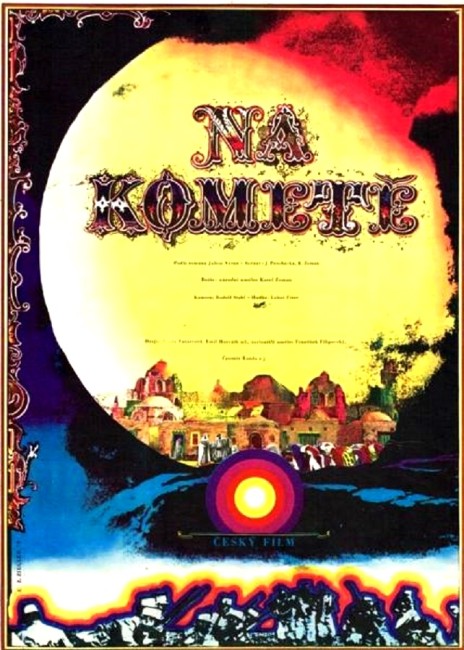 North Africa, 1888. Hector Servadac is a lieutenant with the French Foreign Legion tasked with surveying and mapping the area. He falls off a cliff and meets the beautiful Angelika, who has just escaped captivity aboard a ship of arms smugglers, as she swims ashore. They fall into each other’s arms as a comet appears in the sky. However, instead of the comet colliding with the Earth, the entire landmass they are on is wrenched up into the sky and whisked away aboard the comet. Also taken up is the French Legion fort, the nearby township, a Spanish ship, the smugglers and local Bedouins. The French immediately demand all in the area come under their authority. The legionnaires soon discover the comet is inhabited by dinosaurs and that the weapons they have are useless against them. After throwing their weapons out, these are appropriated by the other parties and turned back against the French. Meanwhile, Angelika is forced to hide to avoid being found by her captor.

With On the Comet, Karel Zeman returns to Jules Verne for the third time, adapting one of Verne’s less well-known novels Hector Servadac (1877), also known in English under a variety of different titles including Off on a Comet and Career of a Comet. The original novel concerns thirty-six people near Gibraltar who are swept up during the passby of a comet and find themselves in a strange land that operates by very different laws of physics as the comet travels through the Solar System. The same Jules Verne novel has also previously been filmed on the cheap, with the addition of stock dinosaur footage, as the English-language Valley of the Dragons (1961).

Jules Verne was very much in vogue on screens during the 1950s and 60s, following the success of Disney’s film version of 20,000 Leagues Under the Sea (1954). This created a spate of Verne adaptations that included the likes of From the Earth to the Moon (1958), Journey to the Center of the Earth (1959), Master of the World (1961), Mysterious Island (1961), Five Weeks in a Balloon (1962), In Search of the Castaways (1962), Jules Verne’s Rocket to the Moon/Blast Off/Those Fantastic Flying Fools (1967), The Light at the Edge of the World (1971) and The Mysterious Island of Captain Nemo (1972). As the cycle wound on, many of the efforts began to abandon scrupulous faithfulness to Verne’s book and take on a broadly slapstick and buffoonish tone. The genre had tapered off by the 1970s, which could well be why On the Comet has not been widely seen in English-language release.

I really liked Karel Zeman’s first Jules Verne adaptation The Fabulous World of Jules Verne with its replication of the original Victorian lithographs in a visually extraordinary mix of animation and live-action such that you never knew what was what. I was hoping that he would do the same here but ended up being disappointed. Certainly, the opening scenes where Zeman has made an attempt to mock much of the film up with the look of Victorian-era sepia tone photographs and postcards do head back in this direction. On the other hand, this never plays out that imaginatively – we get a few scenes of ships and the comet and some colour tinted landscapes in which Zeman plays around with effects where you are not sure what is what but the degree of animation/live-action mix is much lesser here. The dinosaur effects are passable, the comet effects slightly less so.

The Jules Verne novel is taken up by a depiction of the party’s survival aboard the comet and exploration of its different physical conditions. Karel Zeman keeps faith with that somewhat. The parties never do much to explore the world they are on. We also get the addition of dinosaurs, which are not present in the Verne novel. Mostly the film concerns itself with the comic runnings around and interactions between the French, Spanish, British and Bedouin, as well as love interest Magda Vasaryova (a character not present in the book) and her efforts to avoid being recaptured by the gunrunners.

There is a mild amusement to the scene where the French decide their cannons and guns are useless and throw them over the side of the fort (something hard to believe military would order) to be replaced by tin pots on sticks to drive the dinosaurs away, only for the guns to be recovered by other parties who promptly take the opportunity to raid the fort. Here you get the impression that Zeman has taken on board too much of the influence of the English-language Verne adaptations of the 1960s and their pitching everything to the broadly comedic. The film also arrives at a confusing ending that seems to suggest that everything that happened was a dream being had by Emil Horvath.