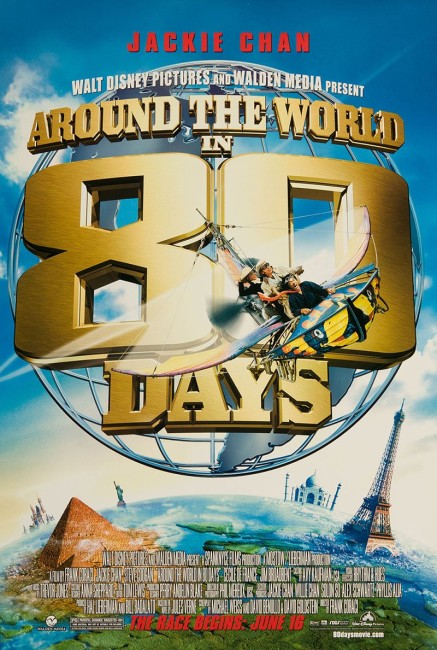 London in the late 19th Century. While on the run from British police as a suspect in a robbery at the Bank of England, Chinese national Lau Xing takes refuge with the eccentric inventor Phileas Fogg. Lau Xing pretends to be French, saying that his name is Passepartout, to get a job after Fogg fires his valet. Before Lord Kelvin, the pompous head of the Royal Academy of Science, Fogg claims that it is possible to travel around the world in eighty days. Kelvin challenges Fogg to prove this or give up inventing and so Fogg agrees to undertake the journey. Joined by Passepartout, Fogg sets forth across Europe, Asia and the United States. They have many bizarre encounters along the way and are joined by a woman, Monique La Roche, in France. However, the scheming Lord Kelvin contrives to have them blamed for the Bank of England robbery and they are hunted by the forces of law and a Chinese warlord.

Jules Verne (1828-1905) has a reputation as one of the first major names to be designated with the label ‘science-fiction writer’. Perhaps more so than he ever was a science-fiction writer, Jules Verne was a writer of what you might call travel adventure fantasies. He created stories that ventured into exotic, sometimes then only newly explored realms, of the world. Whereas Verne’s contemporary H.G. Wells explored the future, Verne seemed to stay fairly much with the known world.

Around the World in Eighty Days (1873) was one of Jules Verne’s most celebrated novels, although in itself has no science-fiction content. (This version is listed because of the addition of a series of wacky inventions to the story). It was largely a fantasy that Verne conceived of the terrestrial world – of imagining all the new modes of transport that had grown up in the Victorian Age (cross-continental rail transport, the building of the Suez Canal) and whether it would be possible to circumnavigate around the world in the prescribed eighty-day limit.

This version of Around the World in 80 Days was created as a vehicle for Jackie Chan. Previously attaining fame for his martial arts/comedy films in Hong Kong, Jackie Chan became a name in the West following Rumble in the Bronx (1995). He had hits with the Hollywood-made likes of Rush Hour (1998) and Shanghai Noon (2000), and sequels to either. The success of these quickly began to pale with a string of miserable flops that Chan signed onto in the 00s with the likes of The Tuxedo (2002), The Medallion (2003) and The Spy Next Door (2010). Among these, Around the World in 80 Days proved to be the biggest flop of them all. Despite a strong promotional push from Disney and a $110 million budget, the film earned only $7.5 million in its opening weekend and a total of $24 million total gross at the US box-office.

In considering Around the World in 80 Days 2004, one should make a clear point of not readinf Jules Verne’s novel beforehand. There are only passing resemblances between the two. For one, the Foggs in either story don’t even take the same route around the world – Verne’s Fogg goes via the Suez Canal, India, Hong Kong and across the continental USA before returning to England; the film’s Fogg goes via France, Turkey, China and then finally develops some similarities to the book in the cross-USA journey and sea voyage back to England.

The adventures that transpire bear little resemblance to Verne – although there is sort of a similarity to the scene during the last leg of the journey where in the book Fogg persuades the ship’s captain to burn all the available wood on the ship to increase their speed, whereas here Fogg persuades them to dismantle the ship so that he can build a flying machine. The film does retain the book’s ending where Fogg thinks he has lost the bet until he realises he has miscalculated due to losing a whole day in circumnavigating the world. There is also the subplot about the pursuing police inspector who mistakes Fogg for an international thief.

Steve Coogan’s Phileas Fogg does bear some resemblances to Verne’s Fogg – he is an English gentleman who could be considered anal retentive in his obsession with order, although the film also makes him into an inventor so that it can get in a host of madcap gadgets. The most noticeable difference is that in the book the valet Passepartout is a Frenchman, whereas the film has him a Chinese man pretending to be French in order to squeeze in the casting of Jackie Chan. Moreover, the film pumps Chan’s role up so as to make Passepartout, who is merely a sidekick in the book, into the hero of the story with Steve Coogan’s Phileas Fogg essentially supporting Chan. Verne does include a woman along for the journey, although she is not a French artist who joins the party as in the film but the Princess Aouda whom they rescue in India from a sati sacrifice where she was forced to join her husband on the funeral bonfire.

As with the 1956 film, this version of Around the World in 80 Days has been turned into a vehicle for star cameos. Virgin Records/Airlines celebrity CEO Richard Branson turns up as the person taking tickets for the balloon ride in Paris; brothers Owen and Luke Wilson turn up in an unfunny piece as the Wright Brothers during the journey across the American Midwest; Rob Scheider has a cameo as a homeless man in San Francisco; Mark Addy turns up as the captain of the ship; John Cleese as a British bobby; Ewen Bremner gives an incredibly inane performance as the police inspector; and Kathy Bates is a miscast as Queen Victoria.

The absolute worst of these is Arnold Schwarzenegger’s performance as a Turkish prince who becomes fixated on adding Cecile De France to his harem. Schwarzenegger is made up in brown skin and outfitted in an amazingly ugly wig, which combines to highlight his 56 years in a highly unbecoming way. It is surely the worst in a career of bad performances on Schwarzenegger’s part.

Jackie Chan doesn’t come out of it too well either – he is looking his fifty years and the sequences where he gets to display his martial arts prowess – with the help of his longtime friend Sammo Hung – are a pale shadow of the screen exploits that made Chan’s name in his heyday.

The worst part of the film though is the turning of the Jules Verne novel into a comedic vehicle. The comedy sequences scour the inane. The entire film is pitched at the level of pompous caricatures and slapstick period frolics that many of the worst of the 1960s Verne inspired films operated on – see guilty offenders like Five Weeks in a Balloon (1962), In Search of the Castaways (1962), Jules Verne’s Rocket to the Moon (1967). Indeed, it is only a few minutes into the film and we have Jackie Chan careening around in slapstick chaos on a rocket-propelled jetpack. There are some ridiculous and mind-numbingly inane sequences with Jackie Chan running around a Parisian art studio in a fight where all the parties get paint over their faces.