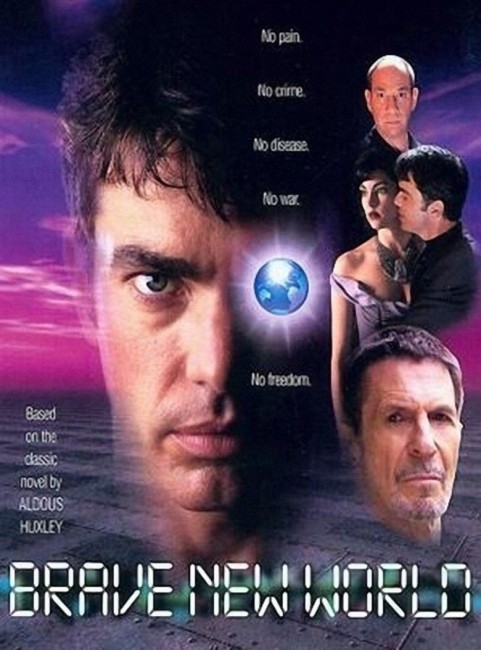 In the future, humanity has been genetically engineered into four classes, ranging from the decision-making Alphas to the worker class Drones. The notion of individual relationships is outdated and people are encouraged to seek pleasure with anybody else. The use of the drug Soma, which provides instant happiness, is widespread. Bernard Marx is a rising publicity man with the Department of Hatcheries and Conditioning. He and his companion Lenina Crowne fly over the Savage Reservations where people who were born by natural means live outside of civilisation, only for their helicopter to crash. One of the Savages, John Cooper, saves them from an attacking mob. Fascinated by John, they bring him back to the city where he becomes an object of curiosity by the sensation-starved populace. However, John also comes to challenge their beliefs about the society they live in.

Brave New World (1932) is probably the best-known novel of the celebrated British writer Aldous Huxley (1894-1963). A grandson of the famous biologist Thomas Huxley, Aldous was known throughout his life as an essayist and occasional novelist. (The one other thing that Huxley is known for is as an advocate of experimentation with LSD). Brave New World was for many years mentioned as a key classic in the Dystopian genre alongside George Orwell’s Nineteen Eighty-Four (1949). Huxley wrote several other books in the Dystopian vein with Ape and Essence (1948) and Island (1962), as well as the historical non-fiction book The Devils of Loudon (1962) that later became the basis of the Ken Russell film The Devils (1971).

Brave New World was Aldous Huxley’s reaction against the utopian works of H.G. Wells and many elements he despised in the American culture of the day. In a critique of the American mass production line, for instance, the citizens in Huxley’s future have elevated Henry Ford to the equivalent of Jesus Christ, swear by his name and are indoctrinated to be good consumers. The British-born Huxley was also appalled at the perceived promiscuity of modern Americans – in his future, monogamous relationships and the notion of family are a thing of the past and polygynandry is the norm, while the consumption of drugs (soma) is commonplace. The one idea that Huxley created that caught on in science-fiction in a big way was of a world where people are engineered from birth to predestined roles in society. (For a more detailed overview of the genre see Films About Dystopias). Brave New World is widely regarded as a classic and has even appeared on some lists of great literary works of the 20th Century. The title is an ironic one taken from a line in William Shakespeare’s The Tempest (1611).

Brave New World has been filmed before. There was Brave New World (1980), a three-hour tv mini-series from Universal starring Bud Cort as Bernard Marx and Keir Dullea as the Director of Hatcheries. This was far more faithful to the Aldous Huxley book than the version here. A cinematic version was also announced in 2009 from Ridley Scott and starring Leonardo DiCaprio but failed to emerge. The book was subsequently reworked and modernised as the tv mini-series Brave New World (2020), which is far more interesting than this. Brave New World also has undeniable influence on the satiric anti-utopia of Demolition Man (1993), which makes direct references to the book in the names of several characters. This version was mounted as a tv movie by a group of largely unknown names. Poorly received, it vanished into obscurity thereafter.

This tv movie version conducts a hatchet job on Aldous Huxley’s book. Certainly, it follows the book on many general points. The genetically pre-programmed class structure aspect is there, although the film now places more emphasis on the hedonist society. All aspects about the Henry Ford religion and programmed consumer society have been excised. Protagonist Bernard Marx is changed from a psychologist who specialises in the hypnotic conditioning of children to merely a PR man. John the Savage is relatively similar to the character he was in the book, albeit hugely simplified and with a different name – although can one say that a John who despatches other attacking savages with martial arts is being truly faithful to Aldous Huxley? The film even produces Huxley’s equivalent of ‘the feelies’ – movies where you could feel the sensation on screen – although uses it in an advertising context as opposed to a mass entertainment substitute.

There is an undeniable appeal to the idea of seeing Brave New World updated to the 1990s, as many of the ideas that Aldous Huxley imagined about the consumer society and relationships have become prophetically true. The film also adds some critiques of modern society that were not around at the time that Huxley wrote – indeed, rather than being a work of science-fiction, the film could just as easily be about a contemporary media-saturated world filled with pill-popping yuppies on the metropolitan nightclub scene looking for the latest novelty. You could almost imagine the story having been written as a Brett Easton Ellis novel, or maybe one of William Gibson’s later works like Pattern Recognition (2003) and Spook Country (2006), which depict the contemporary world as science-fiction. Unfortunately, this means that what we end up with is a dystopia that is the present day in everything except name. As a Dystopian work, the film emerges as banally underwhelming – a future that seems to consist of not much more than pretty psychedelic lighting patterns in a nightclub and a handful of dystopian slogans but little else.

Despite Aldous Huxley written his book way before any others, Brave New World 1998 cannot help but seem like a dated copy of a 1960s/70s Dystopian film like THX 1138 (1971), Rollerball (1975) or Logan’s Run (1976). The film is conducted on a B-budget with no directorial elan or writing that animates any of its ideas. If nothing else, it does show just what an echo that Huxley set up with his images of the drugged, hedonistic populace, controlled with happiness, contrasted with the notion of a desire to return and live naturally, something that can be seen reflected in works like THX 1138, Logan’s Run, The Apple (1980) and Gattaca (1997). Unfortunately, in the monotonous way it emerges on screen, what he have is less a case of Brave New World than of Bland Old World.