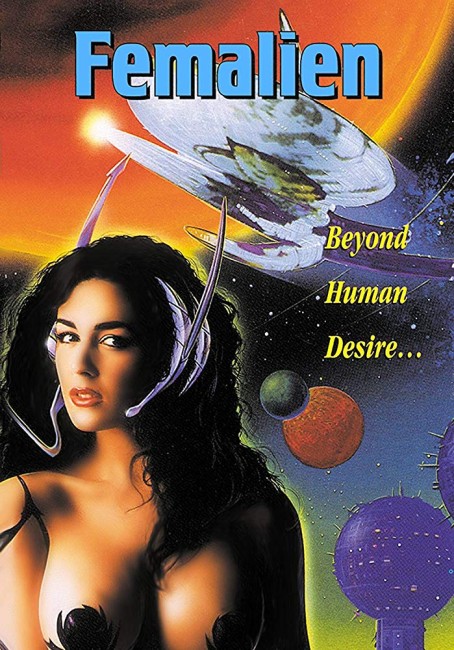 An alien species despatches one of their kind, Collector 3879, to Earth in the body of a woman to gather data about human sexual experience. On Earth, Collector 3879 takes the name Kara. As she wanders through society and participates in various sexual experiences, Kara becomes involves with and decides to help the people at a cafe that is about to be closed down.

While very nominally a science-fiction film, Femalien has been made as a work of erotica. From the mid-1990s to the early 2000s, production company Surrender Cinema specialised in works of softcore erotica like this made for the cable market and VHS release. They also made a number of other genre-related works such as The Exotic House of Wax (1997), The Exotic Time Machine (1998), Pleasurecraft (1999), Timegate: Tales of the Saddle Tramps (1999), Veronica 2030 (1999), Andromina: The Pleasure Planet (2000) and Virgins of Sherwood Forest (2000).

There is one sizzlingly erotic scene with Jacqueline Lovell by a swimming pool, oiling her bikinied body in the sunlight. On the other hand, the photographic studio scene is dull – it is simply much in the way of languorous slow-motion posing against a blue screen, acted without interest by the two models. Femalien is a film that is all slow-motion tastefulness to the point that it eventually becomes dull. It is undeniably classily photographed but none of the scenes in any way succeeds in suggesting the remotest degree of passion on behalf of those participating. All the models throughout seem identically bland and pneumatically inflated. Lead actress Venesa Talor is blank, not to mention features an extremely obvious set of breast implants. There are some competent CGI effects at the start, most notably a spaceship that shows the undeniable influence of tv’s Babylon 5 (1993-8).

There was a sequel with Femalien II (1998), which featured return performances from Venesa Talor and Kurt Schwoebel.