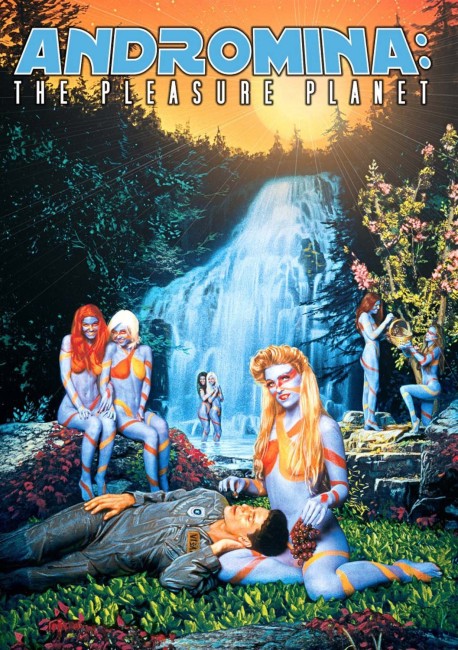 Three space pilots, Cody, Omar and Jeeter, arrive on the pleasure planet Andromina only to find the famous sex bar has closed down because the hostess Mabel has no girls. The pilots decide to teleport via wormhole to the all-female planet Eros, even though contact with Eros is forbidden by galactic treaty, in order to recruit some women to work at the bar. On Eros, the three encounter various women who have all never met a man before. The women alternately want to execute them, hail them as king and make them slaves but above all desire to experience sex with the men.

In terms of plot, Andromina: The Pleasure Planet largely reads as a reworking of male sexual fantasy science-fiction films of the 1950s such as Abbott and Costello Go to Mars (1953), Cat Women of the Moon (1953) and Queen of Outer Space (1958), which concerned themselves with planets filled with all-women. Andromina at least takes the premise to the logical extent that these 1950s films were never allowed to do – it has the male astronauts and the innocents of these all-women worlds explore their natural sexual curiosity.

None of the guys appear to be taking the show seriously. Mike Roman plays with a smirk throughout and fails to give any of his lines a serious reading. While being taken to the stake to be sacrificed, for instance, he is throwing off jibes like: “Don’t I get a phone call? A lawyer?” The scene where Eric Stratton is made judge and must evaluate a baking competition is incredibly badly directed on all levels. When it comes to the girls, Flower [Edwards] who plays Alexa is lovely but alas just cannot do the tough cold-faced interrogator role that she is cast as. Michelle Turner at least plays with a wild innocence that captures her part quite credibly.