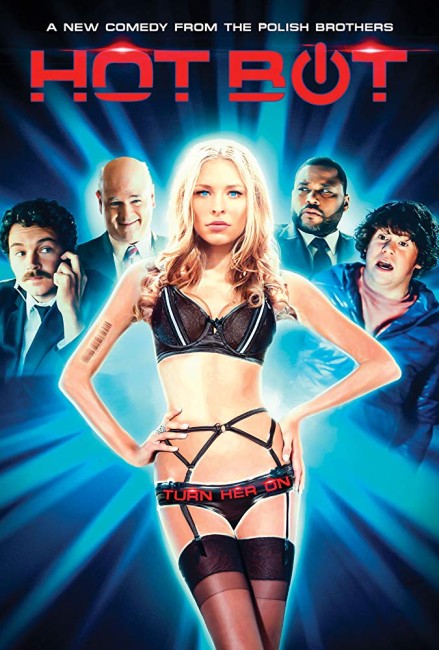 A German company has produced the Hot Bot, a female android designed for sexual use, although it is not yet licensed for use in the US. Utah Senator Biter orders a deluxe Bardot model delivered to him. However, it accidentally activates and escapes while being transported back by two FBI agents. It is then inadvertently run over by two teenage nerds, Limus Huffington and Leonard Stupenski. Thinking the Bardot a live girl, they take it home. When they find what the Hot Bot is, they realise all their sexual dreams have come true. Things are complicated by having to hide it in the house from Limus’s strict parents and then when Limus’s younger sister reads the Bible to Bardot and it gets the idea that they need to be married before sex, not to mention the two FBI agents hot on their tail.

The premise for Hot Bot did little to enthuse me but I went into it with hope based on a liking of everything else that the Polish Brothers had done. However, this only served to double my disappointment with the sophomoric result we end up getting. It may be that one was spoiled by the strength of recent ventures into the theme of relationships between humans and A.I.’s that we had with the likes of Her (2013) or Ex Machina (2015) and was expecting something up in the stratosphere. What we get here is more down around the depths of Weird Science (1985) wherein two teenage losers build an artificial woman that is their idealised sexual fantasy, whereupon much in the way of comedic hijinks ensues.

By contrast to what you would expect, Michael Polish seems to regard the film with tasteful caution but the upshot is the bizarre effect of a film about a sex android in which nobody actually has sex. The absurdity is how by the end scene, the film’s crude and rude pitch eventually softens and goes back to Michael Polish’s default position of the winsome human drama wherein the would-be raucous and vulgar comedy about a sex robot actually becomes an earnest film about teenage first love.

Everything about Hot Bot feels like an awkward comedy made by people not used to the material. The two teenagers are incredibly annoying, especially Zack Pearlman’s off-the-charts obnoxious performance. Their scenes feel like an awkward effort made by older people seeking to hit what they think a teen vibe and missing it altogether. Although the miscalculatedness is not limited there and Larry Miller is allowed to give a performance as the senator in which he goes over-the-top in fairly much every scene he is in, delivering seemingly ad libbed pep talks about semen-encrusted socks.

For that matter, you are not even sure who the intended audience for the film is – much of the humour is too wry and grown up for it to imagine going down well with the under-twenties, while the crude humour and teen heroes are not exactly likely to appeal to anyone over the age of thirty.