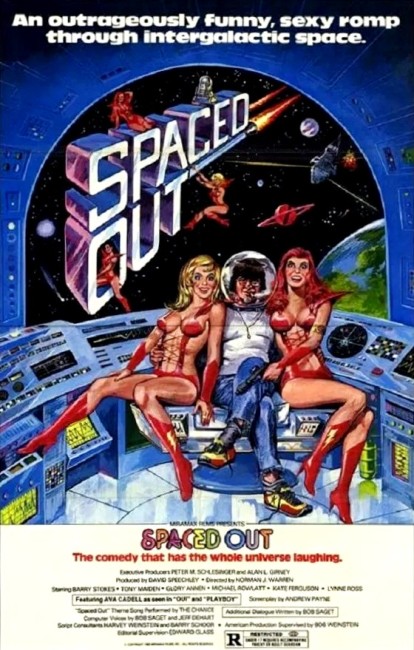 A group of people are on the common – Oliver is parked with his fiancee Prudence as they argue about his frustrations over her refusal to have sex before marriage; sexually frustrated Cliff is walking the dog; while shy virginal supermarket stock boy Willy has come to masturbate to some adult magazines. An alien ship comes down and all four of them wander on board as it takes off. The ship is crewed by three alien women, Skipper, Cosia and Partha, who decide to take the humans to an alien zoo. The women have no idea what sex is. Along the way, the various men introduce the women to the concept of sex.

Outer Touch, renamed Spaced Out in the US, feels like a confluence of trends. The 1970s was the era of the British sex comedy, which included the likes of Percy (1971) and in particular the hugely popular series of films beginning with Confessions of a Window Cleaner (1974) starring Robin Askwith, and other copycat works. (Here the diminutive Tony Maiden who plays the virginal nerd Willy could easily be a double for Robin Askwith). These offered up fairly innocuous fare consisting of lots of boobs and smutty humour and not a whole lot that ever went beyond that. In 1979, science fiction was big with the hits of Star Wars (1977) and Close Encounters of the Third Kind (1977), which presaged a massive new box-office interest in science-fiction works. It feels like the two have met in a bizarre mix here.

Outer Touch/Spaced Out feels a certain breed of SF film about naive alien women coming to Earth to find men – you could point to films like Devil Girl from Mars (1954) or Mars Needs Women (1966) or some of the films where astronauts find themselves on all-women planets such as Abbott and Costello Go to Mars (1953), Cat Women of the Moon (1953), Fire Maidens of Outer Space (1956) and Queen of Outer Space (1958). Here someone’s smutty mind has speculated about the next logical step and about how such encounters would go in the bedroom. The UK had previously ventured into a very similar territory with Zeta One (1969).

There is not a huge amount to the film beyond that. Least of all anybody thinking through the logistics of things. Like, for example, where do all of the alien woman come from – if they are ignorant of sex, how does the species reproduce? If, as we see, the women have perfectly working genitalia and sexual parts, how do they remain completely ignorant of their own biology and not have done the thing most people do upon hitting puberty and explored what said parts do?

On screen, all of this plays out in a series of witless jokes. The women wonder why men have no chest appendages and what the bulge between the men’s legs is – “Is that a weapon?” They pick up some adult magazines and wonder what they are looking at – “Is it a form of combat technique?” “No, it’s a religious ceremony.” With equal inconsistency, there’s also a shipboard A.I. in the form of a jukebox, which comes with a smartass voice that is intended to be played as gay and seems a whole lot more knowledgeable about Earth culture and relationships that the women do. Much of the film plays out in a series of unfunny slapstick sequences – like a scene where Tony Maiden stumbles about a gym as Kate Ferguson tries to tackle him that ends up as a routine where he keeps causing her to fall over herself and bump into things.

The whole film has been cheaply made and takes place on a handful of sets. Many of the effects scenes are recycled from tv’s Space: 1999 (1975-7) where shots of various ships have been reused meaning that the ship abruptly changes in shape and size in between scenes.