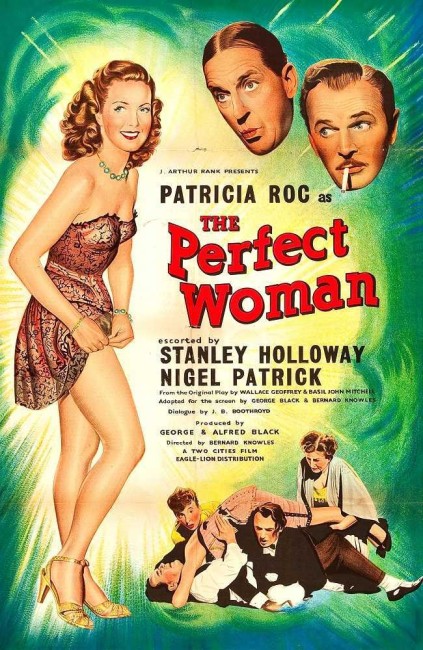 In London, Roger Cavendish learns that his inheritance is about to be cut off. With the help of his manservant Ramshead, he sets out to look for a job. He answers an ad placed in the newspaper by Professor Ernest Belman. Belman has created a lifelike robot in the form of a woman and wants someone to take it for a test in public. Roger and Ramshead agree to do so and are given a list of the simple commands to direct the robot to walk, sit, turn and so on. Meanwhile, Belman’s niece Penelope, who resembles the robot, is bored. She and the maid Mrs Butters decide on a scheme where she will to pose as the robot. Unaware of the deception and believing that Penelope is the robot, Roger and Ramshead sign in to a hotel but the only available room is the bridal suite. Problems are created when Roger’s aunt sees him at the hotel with Penelope and comes to the conclusion that he is getting married.

The Perfect Woman has the distinction of being one of the first screen depictions of an Android. There had of course been the android Maria in Metropolis (1927) but this was (as far as I am aware) the second – unless you want to count the Tin Man in The Wizard of Oz (1939) as an android – and the first made in a light, comic vein. The film also has the distinction of portraying one of the first screen scientists who is not a Mad Scientist, as was the prevailing trend throughout US films of the 1940s – here is one of the first depictions where the mad scientist makes the move to a cuddly, absent-minded old duffer.

The film is based on The Perfect Woman (1948), a play by Basil Mitchell and actor Wallace Geoffrey that had a reasonable run on the London stage before the film was made. The director was Bernard Knowles who had worked as cinematographer on some of Alfred Hitchcock’s British films of the 1930s including The 39 Steps (1935). Knowles made about ten films as director mostly for Gainsborough, beginning with the ghost story A Place of One’s Own (1945). His only other genre works were the SF film Spaceflight IC-1 (1965) and the cryogenic murder mystery Frozen Alive (1964), as well as a couple of other films that sound like they should be genre films with The Magic Bow (1946), which is actually a biography of the composer Paganini, and the drama The White Unicorn (1947).

The Perfect Woman usually comes with comments along the line of it being dated and sexist. Dated is a very subjective view (I tend to be more tolerant of these things than the average person) – the film is the sort of comedic interplay of manners and society that was popular in the era. It does come with what could be regarded as rather classist assumption – of a joke being made out of hero Nigel Patrick who comes from a moneyed background being cut off from his inheritance and forced to find a job (although still being left with sufficient money so as to not have to think about cutting his manservant loose).

As to sexist, I am not sure. Unless you want to count the idea of romance and jokes about marriage as being sexist (I don’t). On the other hand, none of the comedy present is about making derogatory fun of women or depicting them as having to be submissive to the men. Maybe people can find something objectionable out of the title or the idea of an android being made in the form of a woman but I find no more to raise issue with here than I would about Metropolis. There are far worse cases that can be pointed to.

Certainly, The Perfect Woman is not a film that can be upheld as operating in any knowledgeable way about robotics. The android woman is there solely for comedic purposes – we see a single scene where the control panel on her back is pried off and the insides shown as containing a whirring motor parts. Nor does the substitution scheme that takes up much of the film have any plausibility – scientist’s niece Patricia Roc is feeling bored at the social prospects facing her and so in about five minutes flat she agrees on the suggestion of maid Irene Handl to pretend to be the android as Nigel Patrick and manservant Stanley Holloway arrive to take her out.

The rest of the film is based around the comic problems that emerge as Patricia Roc pretends to be the robot without Nigel Patrick and Stanley Holloway aware of it. There is a good deal of fast-paced verbal interplay. There are also a good many comedic scenes based on the confusions – of trying to navigate Patricia Roc through the hotel lobby while she is reacting to people saying “paging Mrs Neil” as though it were a commend to kneel, or David Hurst as an inept waiter discovering that Roc is a real person.

There is a snappy scene where Patricia Roc is seated at a dinner table and tries to sneak some soup from the bowl and eat a roll while Nigel Patrick and Stanley Holloway don’t notice at the same time as they keep emptying the bowl to make the hotel staff think she is eating. The film ends on an appealingly madcap scene where the real android (Pamela Devis) is brought in, ending with everyone in a big tangle on the hotel room floor as the snobbish aunt walks in, whereupon the trigger word ‘love’ is activated and the android goes crazy, sparking and emitting a huge cloud of smoke that fills the room, before blowing up in an explosion in the lobby. It’s all a bit creaky nowadays but I did find myself amused by the film.