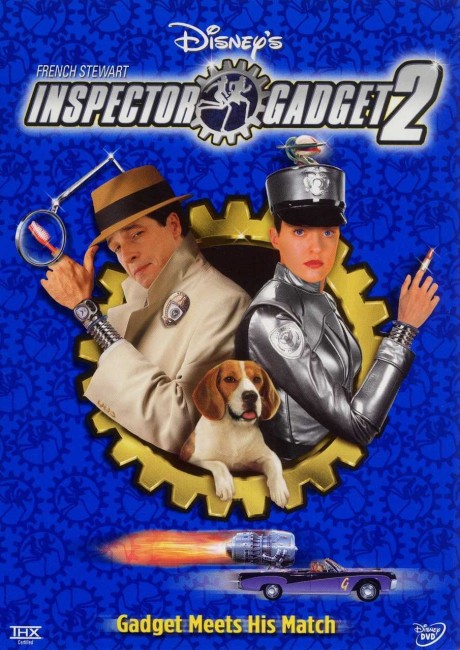 Inspector Gadget is experiencing problems with glitches in his circuitry, which are causing him to often manifest the wrong gadgets. Claw then escapes from custody. At a news conference, the mayor introduces Gadget’s successor, a female Gadget known as G2. After he bungles the latest attempt to apprehend Claw, Chief Quimby has Gadget demoted and later fired. However, the eager Penny manages to uncover Claw’s scheme to build a giant laser that will freeze Riverton in time so that Claw can rob the gold reserve.

Inspector Gadget 2 is a sequel to the theatrically released Inspector Gadget (1999), which in turn was a live-action version of the animated tv series Inspector Gadget (1983-5). None of the personnel from the first film are involved in his sequel, which gives all the appearance of being designed as a throwaway video-released effort that has been shot on the cheap in Australia.

The Inspector Gadget film was an amiably silly effort, even if it strayed somewhat from the cartoon series. To its credit, Inspector Gadget 2 has made more of an effort to return to the series – The Claw’s face remains hidden; Penny becomes more of the earnest genius who solves most of the cases as she was originally written; while Gadget is played as more of the bumbling fool he was in the series rather that Matthew Broderick’s nice guy characterisation in the first film.

The visual tone of the sequel has also become much more cartoonish – the entire film seems to take place in a Day-Glo cartoon world. There is also a much more wildly absurdist feel to this version. It becomes amusing to watch some of the gadgets being sprouted – everything from eggbeaters, a pair of hands that toss pizza dough overhead or pop out to offer a handkerchief, even lightbulbs popping out when Gadget has an idea, or Gadget using his ear as a pencil sharpener, his hand as a cellphone and G2’s finger sprouting a tube of lipstick.

However, this visual live-action cartoon feel ends up being Inspector Gadget 2‘s undoing. Director Alex Zamm plays the slapstick up to a maximum. Indeed, with French Stewart’s one-note performance, we frequently feel like we are in an Inspector Closeau rather than Inspector Gadget film. This is also slapstick that has been pitched down to a moronic level – the character of Mark Mitchell’s police chief seems to exist for no purpose other than to be splattered with pink goo and squashed donuts or have wooden cages trapped on his head.

There is a mind-boggling scene where Gadget is demoted to janitorial duties and uses a toilet brush attachment on his hand, which gets stuck down the toilet, causing him to spin around and around like a rotor and then be blasted across the office. There is a madcap scene at a scientific conference with Gadget being remote controlled by Claw and skidding about at high speed on spilt mustard, uncontrollably sprouting gadgets and bouncing about on springs.

The climactic scene is dependent on Gadget trapping Claw’s pursuing van on a giant piece of pink bubblegum that causes the van to spring back and forward like a yoyo. Birds randomly flying by drop one-liners; when the sun comes up, it bounces to the accompaniment of cartoon sound effects; when Gadget slams into a stop sign he leaves the imprint of his face and so on. If this frenzied silliness is your idea of entertainment then by all means enjoy; I just found Inspector Gadget 2 constantly empty-headed inanity irritating to the max.

In the role of Inspector Gadget is the ultra-annoying French Stewart who came to fame in tv’s 3rd Rock from the Sun (1996-2001). Stewart has a way of playing everything with his eyes squinted as though he spends most of his time in a marijuana haze – his entire acting range seems to consist of delivering everything in a stoned deadpan monotone. His performances have an annoyingly one-note quality to them. Indeed, French Stewart is one of the few performers that can rival Pauly Shore for infuriating inanity of screen presence. Far more successful is Elaine Hendrix who gets into the spirit and offers a smartly clipped performance as G2 – she deserves a film of her own.

Director Alex Zamm is previously best known for Chairman of the Board (1998), which had the incredibly stimulating concept of a surfer becoming the CEO of a corporation. He has also made Dr Doolittle: Million Dollar Mutts (2008), Beverly Hills Chihuahua 2 (2011), Tooth Fairy 2 (2012) and The Little Rascals (2013), as well as Disney Channel films like My Date with the President’s Daughter (1998) and The Pooch and the Pauper (1999).

(Winner Worst Film in this site’s Worst Films of 2003 list).