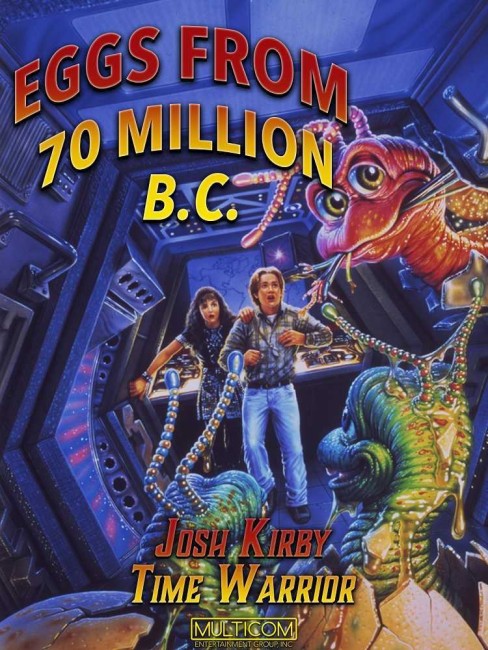 While travelling through time to get the components of the Nullifier, Josh Kirby, Irwin 1138 and Azabeth Siege discover time barnacles affixed to the hull of the timepod. Attached to these are eggs that Irwin determines date from 70 million B.C. The eggs hatch, producing a horde of cute worms that are presumed harmless until they start eating the metal of the ship. This causes the timepod to crash on a planet. They emerge to discover they are on the world of Azabeth’s warrior people, The Kang. However, humans are the hated enemies of The Kang and Josh and Irwin are imprisoned. Azabeth must make a choice between her people, including her betrothed, and standing up to free her friends. At the same time, the worms causes chaos for The Kang, eating everything metal, just as the warlord Dreadnaught plans to invade.

Eggs from 70 Million B.C. was the fourth and one of the better entries in the Full Moon’s Josh Kirby … Time Warrior! series of juvenile films. (See below for the other entries). On one hand, it is down at the level of cheap silliness that the rest of the films are. For instance, despite the title inflating it by a factor of one thousand, the script clearly identifies the eggs as coming from 70 Million B.C. The effects work reaches a barely minimal level. Mark Rappaport’s puppet work is only slightly more mobile than the rest of his inept work usually is – even so, the big glass-eyed worms look incredibly silly.

The initial entries in the Josh Kirby series were poor but by the third film the series started to pick up considerably in quality and Eggs from 70 Million B.C. is quite good in places. The main story about the worms wreaking havoc and the invading warlord fails to hold one’s attention. However, the subplot about Azabeth taking a stance against the warrior culture she grew up in is surprisingly adult in places. The scene where she stands up against her commander and betrothed on her convictions about the humans contains some fine writing.

Similarly, the part where she decides to spare Akira’s life is a cliché scene but the reasoning offered up strikes one as highly plausible. In fact, the film is far more of an Azabeth story than it is a Josh Kirby story (the principal villain Dr Zoetrope is sidelined for the entire film). In these scenes, teenager Jennifer Burns rises well to the complexities required by the part.

The film is not without its moments of humour – there is a rather funny scene where Corbin Allred zaps the villain Dreadnaught with his Time Warrior powers and unwittingly reduces him to a baby. The ending with the appearance of the mushroom people is genuinely surreal.