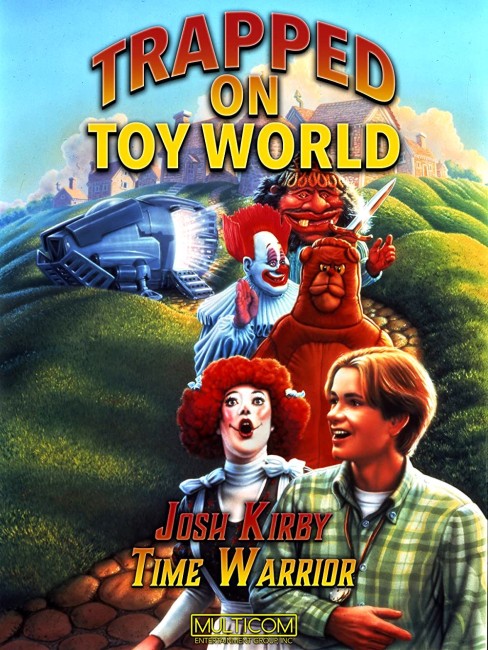 As Josh Kirby, Irwin 1138 and Azabeth Siege race throughout time to stop the evil Dr Zoetrope from regaining the six parts of the Nullifier, Josh falls out of Irwin’s timepod and lands on a planet. He discovers that he is on Toyworld, which is inhabited by life-sized toys built by the kindly toymaker Gepetto. Zoetrope arrives determined to get the Nullifier component. Josh tries to get the toys to stand up against Zoetrope, only to realise there are no weapons on the world and that the toys have all been programmed for non-violence.

Trapped on Toyworld was the third of the Band family’s Josh Kirby juvenile film series, which were all shot back-to-back. (See below for the other Josh Kirby titles). Each of the episodes follows the continuing story of Josh Kirby, the scientist Irwin 1138, the teen warrior girl Azabeth Siege and the cute pet Prism as they race in the timepod to find the parts to the Nullifier before the evil Dr Zoetrope. Each episode ends on a cliffhanger that naturally segues into the following film.

Almost despite themselves, the stories strike up a certain swashbuckling vigour reminiscent of any decent juvenile space opera. The credits sequence, which edits together highlights from the various films, creates an enormous sense of adventure with the characters encountering dinosaurs, giants, transformer armour suits and the like. Indeed, the Josh Kirby films closely resemble tv’s Doctor Who (1963-89, 2005– ) – both featuring a group of travellers adventuring through time and space in a time machine, and in capturing a certain charm that makes the dodgy effects work for it. (Indeed, the series’ plot device of the Nullifier has been taken wholesale from the premise for Doctor Who‘s The Key to Time (1978-9) season, while Jennifer Burns’ warrior girl Azabeth could be a teen version of Louise Jamieson’s Leela).

The basic idea of Trapped on Toyworld – of a planetful of living toys – is a silly one that the film conducts with a certain degree of charm. The budget never stretches to make the human-sized toys convincing – they are only actors in not very convincing costumes, while the wind-up car is just a painted VW. And there is a little too much dancing and singing for one’s liking.

However, there is a more serious theme underneath. There is the striking moment when the hero tries to rally the toys to his defence only to find that they have been programmed for non-violence – a dilemma that the similarly themed Toys (1992) never confronted despite its larger-scaled non-violence theme. The scene where toymaker Buck Kartalian (who both looks and talks like Mel Brooks) explains his reasons for creating the toys manages to be rather touching.

The episode is not without some amusements – “Can’t you just move into the gingerbread house with us and live happily ever after?” the lovelorn Raggedy Ann doll (Sharon Lee Jones) asks the hero. The effects work is poor, the worst being Mark Rappaport’s unconvincing puppet work – it is a constant puzzle as to why the Bands continued to employ Rappaport for so many films. Nevertheless, this is a likable entry in the series.