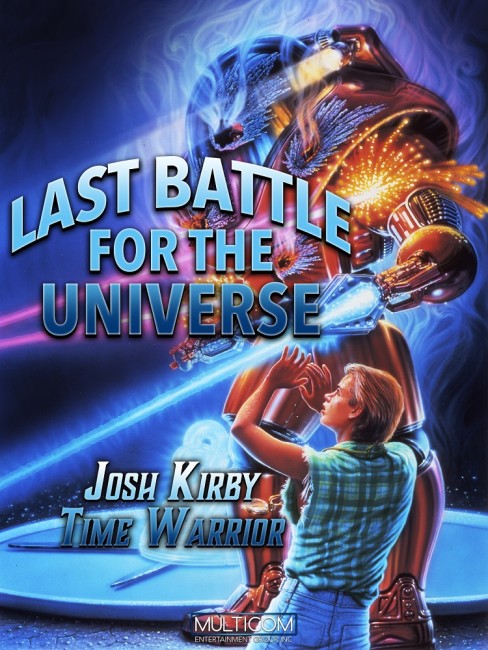 aka Josh Kirby … Time Warrior! Lost World of the Giants

Irwin 1138 reveals he is the real villain and takes the last Nullifier component at gunpoint, abandoning Josh Kirby and the others on an alien planet. Zoetrope reveals the truth to Josh – how in the 25th Century Irwin found an alien device, The Decimator, and as Science Minister used it to help the corrupt Prefect tighten his control over the people. Zoetrope constructed an indestructible Nullifier that would counter The Decimator’s effects but Irwin had him imprisoned and then distributed the pieces of the Nullifier throughout time. Josh now uses his Time Warrior powers to help them escape and they end up back at Josh’s home in Green Oaks in 1980, not long after Josh was born. Although they are invisible, it is the opportunity for Josh to see his late mother once again. In his attempts to build a time travel device out of lawnmower parts, Zoetrope accidentally reduces them to six inches tall. Eventually, Zoetrope succeeds but as Josh prepares to head to the 25th Century to stop Irwin, he faces the hard choice of having to leave behind Azabeth, realising that if he is successful this timeline will be erased and she will no longer exist.

Last Battle for the Universe was the sixth and last of the Josh Kirby … Time Warrior! films. (See below for the other titles). This is one of the better entries in the series. It never mounts to a grandly scaled enough a climax for the series to go out on, but it arrives there in a modest enough way that is perfectly satisfactory for the low budgets that the films were produced on. The effects work placing the actors against giant-size people is surprisingly effective, especially in comparison to some of the decidedly spotty work on the earlier entries in the series.

The best aspect of the film is the script, which is written to a level of maturity rarely found in children’s films. The scenes with Josh talking to his sleeping mother, divided between staying behind with her and going back to save the future, is a lovely piece of writing. The scene where he must confront Azabeth, who has decided to sacrifice herself so that he can save the future with the knowledge that he will never see her again, is a character choice that one is not likely to see in many other children’s films.

The film is written not without a degree of amusement too. Azabeth has a highly amusing paean to an ordinary suburban street as being what her people aspire the most to in life, while Josh is aghast at being confronted with his baby self: “I just messed myself in front of everybody. This is even worse than baby photos.” And then there is his lament to his giant sleeping mother: “I never thought I’d get the chance to see you in this life and even if I did, I didn’t think you’d be the size of the Jolly Green Giant.”