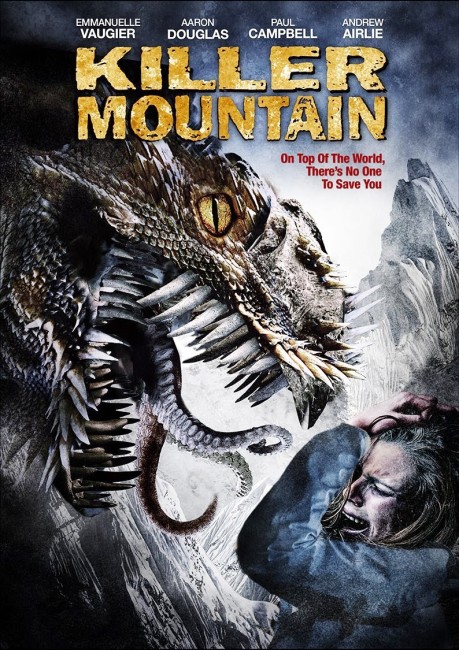 Top mountaineer Ward Donovan is hired by medtech billionaire Walter Burton to go on a rescue mission up Gangkhar Puensum, the forbidden mountain in Bhutan. Ward’s former girlfriend has become trapped there after leading an illicit expedition up the mountain on behalf of Burton. Ward forms a team and they begin the ascent, using a chemical specially developed by Burton’s company that gets around oxygen deprivation. However, things rapidly go wrong as they are attacked by creatures that live on the mountainside. As they reach the peak, they discover what Burton has been seeking and the Bhutanese authorities are trying to prevent them from getting to – the lost city of Shangri-La, which contains the secrets of immortality.

Killer Mountain is another of the B-budget films made for the Syfy Channel. Upon first glance at the title, I was not even sure it was a film I was going to have to cover but then reasoned that it was screening on the Syfy Channel therefore should be genre material. The title led to all sorts of interesting speculations about what it might actually be about. The immediate thought was that it would be something along the lines of the underrated supernatural Western Shadow of Chikara (1977) with prospectors coming up against a cursed mountain. The more outlandish possibilities suggested the idea of a mountain coming to life to kill people not akin to something like the Ouroboros creature in Syfy’s Behemoth (2011).

Disappointingly, neither of these turn out to be the case – ‘Killer Mountain’ merely turns out to be the description of a mountain that is dangerous to climb and is regarded as forbidden by the locals. In fact, more than half of the film does not even register as a science-fiction film and falls into the genre of the mountaineering drama. Much of this is centred around the usual tensions that occur in mountaineering films – people struggling to make the ascent, members of the party falling to their deaths, their dealing with storms, avalanches and so on. Produced on one of Syfy’s economy budgets, the film has been cheaply made in British Columbia where the shots of the cast members traversing the mountain are all medium angles rather than panoramic ones as you might expect, while the handful of scenery shots we get have all been recycled from Vertical Limit (2000).

It is only in its latter half that Killer Mountain transpires into a genre film. There are some monsters lurking around the mountainside. What they are and where they come from is not very well explained. Dramatically, these are not particularly well tied to the story and seem there just to provide a resident menace. Moreover, the film’s colour scheme is all greys or dark colours and it is often difficult to see the creatures or get a clear glimpse of what they look like. There are also some slugs although it is not clear if these are embryonic versions of the monsters or different creatures altogether.

Certainly, once the film reaches the mountaintop, it gets more interesting – well not so much interesting as filled with some weird and randomly attached ideas. The mountaintop turns out to be Shangri-La. Although often believed to be a mythical place that originated out of Tibetan culture, it was actually created by British writer James Hilton in the novel Lost Horizon (1933) – filmed as Lost Horizon (1937) and Lost Horizon (1973) – depicting a hidden mountain valley paradise discovered by Westerners who find they can live for hundreds of years away from the stresses of civilisation.

When it comes to Killer Mountain‘s Shangri-La however, there are no hidden valleys or serenely placid Buddhist monks, merely the idea of an immortality serum that can be distilled from the blood of the slugs. There is not even a lost valley, just a series of mountaintop caves. Even more random is the insertion of a series of cave drawings at the end, which we are told are evidence of Ancient Astronauts – thus plunging Killer Mountain into the arena of the works of Erich von Daniken and his view that all of the ancient marvels and mysteries were created by visiting aliens – for which see the documentary Chariots of the Gods (1970).