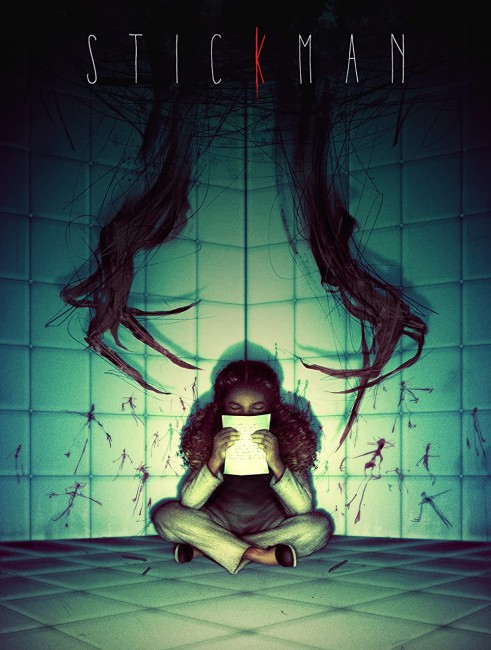 As a child, Emma witnesses a boogyeman creature she calls Stickman kill both her sister and mother. Believed responsible, she was placed in the Hollybrook psychiatric institution. There with the aid of the rarely-speaking Jeremy, she found a means to tame the Stickman by constantly drawing pictures of it. She is deemed fit to be released and placed in a halfway house. However, in teasing her, one of the other girls Liv finds the rhyme that summons Stickman in Emma’s belongings and reads it out despite Emma pleading that it must never be spoken aloud. Now Stickman reappears and begins killing its way through the girls at the halfway house.

Stickman is based on the Slender Man urban legend. This was an internet creepypasta created in 2009 about an unnaturally tall figure that lurks in the shadows and befriends/abducts people. This has spread all around the internet in stories and artwork. It gained notoriety in 2015 when two teenage girls killed a friend, claiming to do so on orders from the Slender Man.

Ten months after Stickman came out, there was the big-budget theatrically released Slender Man (2018) based on the Slender Man legends. However, this ended up fizzling critically and at the box-office. Stickman feels like it should have been that film. It operates with far less in the way of budgetary resources but ends up delivering them as a tight and undeniably spooky show and outstrips everything that Slender Man did.

Sheldon Wilson seems to prefer making films for the Syfy and other cable channel outlets. Even considering such a usually creatively reduced environment, he does a standout job. He has an instinctive feel for paranoia and nightmare fears. There is an undeniable spookiness to the scenes with the Stickman figure’s long elongated claws appearing around the edges of doors, dragging Hayley Law down stairs, even appearing out of the surface of a desk at one point (where the ingenious solution is to tip the desk upside down), or of its figure lurking unnoticed in the shadows in the background of rooms or silently crawling around walls. Perhaps the most nightmarish of these scenes is one where Zoe De Grand Maison and Sarah Fisher flee in a stolen car where the Stickman appears on the roof, jabbing its claws down through the roof of the car as they drive.