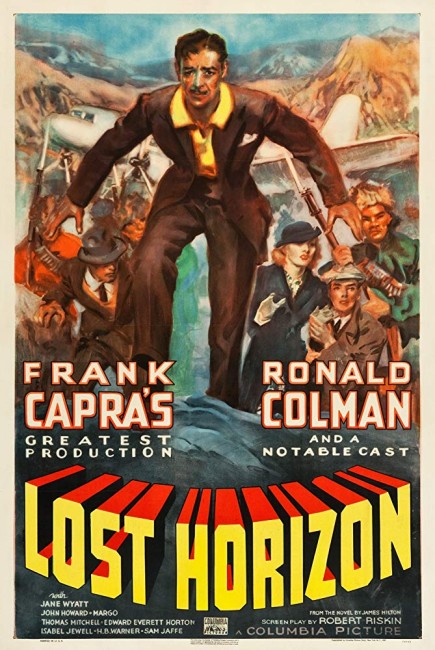 A group of British subjects flee China during an uprising but their plane crashes in the Himalayas. They are found by monks and taken to Shangri-La, a valley that strangely exists as warm and fertile among the snowy wastes. There they settle into Shangri-La’s peaceful, unworried way of life. In Shangri-La, they learn that now being relieved from the worries of civilisation they can enjoy a lifespan of several hundred years. The only catch is that they can never leave the valley .

Lost Horizon has become regarded as one of the classics of its era. It was a huge hit in its time. The film was adapted from Lost Horizon (1933) by British writer James Hilton, who subsequently went on to write the classic Goodbye Mr Chips (1934), and proved a huge success when printed in the US. There was then this film adaptation.

Coming at the end of The Depression, Lost Horizon seemed to hit a chord in offering a grand dream of escape from the worries of modern life, the fantasy of being able to find a remote corner of the globe where one could live in peace, where there is no need for money, where everything is plentiful, where squabbling is overcome merely by courtesy and where the total absence of worry brings near immortality.

Today Lost Horizon is most certainly an overrated classic. The nebulousness of its wish-fulfillment seems naive. All the misty-eyed presentiments of the High Lama come out as insipid and banal. Shangri-La itself looks less like Utopia or a Buddhist retreat than it does a chintzy Hollywood country club after the Art Deco designers have moved in. As with almost any work of Utopian fiction, it has the great dramatic problem that in a perfect and harmonious world there is a substantial lack of drama and internal conflict.

It is rather ponderous and slow going, yet there are times when Lost Horizon has moments of greatness. The initial escape, flight and rescue are excitingly directed. The final image of John Howard fighting through the snows to return to Shangri-La has the epic quality of someone struggling to regain a lost dream that are cinematically endearing. The film also has a reasonable cast, including Ronald Colman and Jane Wyatt, with Edward Everett Horton proving a scene stealer as the prissy-mannered, tetchy Lovett.

Most versions of Lost Horizon in existence today are the version that was re-edited for television, which is missing 25 minutes of the original 132 minute release print. The complete original print seems to be lost today. In the 1980s, a version was pieced together from various sources containing some of the lost footage as well as seven minutes of scenes that are represented by stills overlaid with the complete soundtrack.

The film was remade in colour as a musical as Lost Horizon (1973), a production that was widely regarded as a disaster of epic proportions. Shangri-La and its secrets of immortality also makes an appearance in The Librarian: Quest for the Spear (2004), Sky Captain and the World of Tomorrow (2004), The Mummy: Tomb of the Dragon Emperor (2008), Killer Mountain (2011) and Missing Link (2019). The notion of the lost valley where people can rejuvenate/become immortal was also borrowed by Tarzan’s Magic Fountain (1949) and Star Trek: Insurrection (1998).

The notion of Shangri-La has become so widespread that there are a number of tourist locations in China, Tibet and Pakistan that lay claim to being the historical Shangri-La. In an episode of the British tv series In Search of Myths and Heroes (2005), historian Michael Wood made an effort to trace the historical basis of Shangri-La and claimed that the abandoned city of Tsaparang in Tibet was the real location.

Director Frank Capra became celebrated for his sentimental visions of the American heartland, as in films such as It Happened One Night (1934), Mr Deeds Goes to Town (1936) and Mr Smith Goes to Washington (1939). Capra ventured into genre material upon two other occasions with the Grand Guignol murder comedy Arsenic and Old Lace (1944) and the angelic-intervention classic It’s a Wonderful Life (1946).