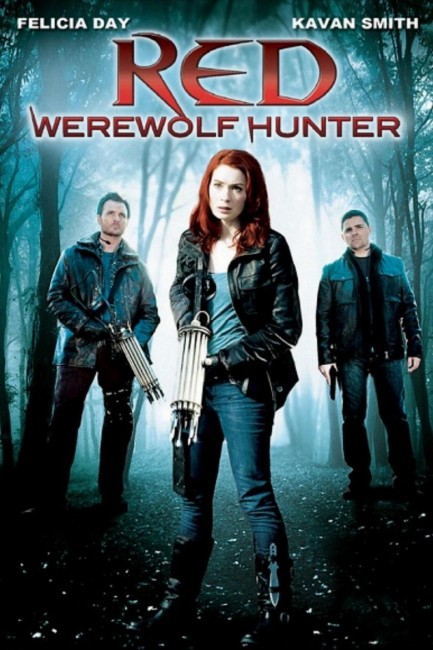 FBI agent Virginia ‘Red’ Sullivan takes her fiancee and co-worker Nathan Keswick home to introduce him her family. She is immediately dragged into an argument with her family over whether she should tell him everything. Stepping outside, Nathan sees a man collapse dead but when he returns from calling for help finds that the body has been burned to ashes. The others are forced to tell Nathan that that the man was a werewolf and they are a family of werewolf hunters. They maintain a truce with last of the werewolves in the area, sparing them as long as they do not enter the town. Struggling to understand this, Nathan goes for a walk only to encounter Gabriel who promptly transforms into a werewolf and attacks him. The others find Nathan apparently unharmed but are concerned about whether he was bitten. They are mobilised to deal with a new threat as Gabriel takes over as leader of the werewolf pack and abandons the truce, recruiting new wolves and hunting humans they have abducted as game. In the midst of the hunt, Nathan discovers that he has been bitten and is about to become a werewolf.

Red: Werewolf Hunter was one of a spate of revisionist fairytales that were made for the Syfy Channel. Others of these included Beauty and the Beast (2009), Sinbad and the Minotaur (2010) and Witchslayer Gretl (2012). This was just before the spate of big-screen reworkings of fairytales as dark fantasies that we had with Red Riding Hood (2011), Mirror Mirror (2012), Snow White and the Huntsman (2012) and Jack the Giant Slayer (2013). It is hard, for instance, not to think that the title premise – which seems to promise the idea of a grown-up Red Riding Hood turned werewolf hunter – did not have some influence on the subsequent Hansel & Gretel: Witch Hunters (2013).

The central idea of Red: Werewolf Hunter seems promising, especially in the opening scenes where we disorientingly go from a loose restaging of the fairytale to the grown-up Riding Hood sitting in a modern SUV and now an FBI agent. Thereafter however, one’s hopes for the film sink. (Well, they do about the moment the opening credits come up and we get the Syfy Channel name and a typical no-name cast). Any hopes the film might have raised sink entirely through the basement about the point that we get to see the werewolves, which contain probably some of the shittiest CGI werewolf transformations I can ever remember seeing in a film.

With the set-up that Red: Werewolf Hunter has, the premise could have worked if the film had been given a decent budget. Alas, the film is killed by a quick shooting schedule, a director’s indifferent set-ups and the utter cheapness of the effects. The plot also comes with holes in it – you keep wondering if the family have devised a means of detecting those that are werewolves by shooting them with silver pellets, then why don’t they shoot Kavan Smith rather than spend the bulk of the film sitting around in uncertainty over whether he has been bitten or not.

The other disappointment is that the film offers up the promising idea of a modern spin on Little Red Riding Hood – and then does nothing with it. We get a single scene with Felicia Day walking through the woods wearing a red riding hood near the very end but the image seems to be there simply because the production team felt like they had to include it. Similarly, we learn that Felicia Day’s Virginia is nicknamed Red and that this is a hereditary name given to the women of the family – for no other reason than that they needed to justify the title. Outside of that, the film’s relevance to Little Red Riding Hood is negligible.