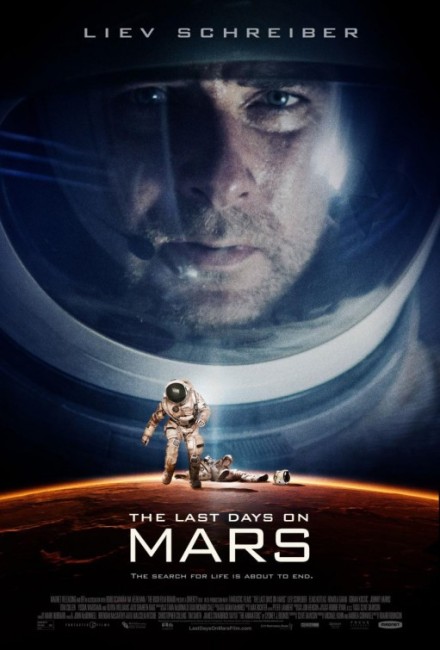 It is the last nineteen hours of the eight-person Aurora 2 expedition to Mars. Captain Charles Brunel allows crewman Marko Petrovich to skip the final briefing to head out and change a faulty sensor. Others are suspicious and check Marko’s logs to find that he has discovered possible signs of life. Out at the site, the ground abruptly collapses beneath Marko. His body and that of the person sent out to guard the crevasse turn up later, seemingly able to breathe without their spacesuits and transformed by an infection. The zombified crew members take over the lander, forcing the others to evacuate to the hydroponic tent. The surviving crew try to hold off the infected as their numbers are eliminated and survive to make it to the rendezvous point to return home in a few hours time.

The Last Days on Mars is a debut film for Irish director Ruairi Robinson. Robinson had previously worked in visual effects and had made several short films, one of which, Fifty Percent Grey (2001), was nominated for Best Animated Short Film at the Academy Awards. Prior to this, Robinson was one of several directors who had been attached to a long announced live-action version of Akira (1988). The film premiered at the Director’s Fortnight of the 2013 Cannes Film Festival.

The Last Days on Mars reminds of a spate of films we had just over a decade ago – the likes of Escape from Mars (1999), Mission to Mars (2000), Red Planet (2000) and John Carpenter’s Ghosts of Mars (2001). These can be counted as the first major films to attempt to depict a Mars of the post Rover era, an astrophysically credible one that was a red sanded, airless vacuum that was open to the possibility of human colonisation someday. However, after establishing their scientific accuracy, both Mission to Mars and Red Planet also had the same story problems that The Last Days on Mars does – that the filmmakers didn’t consider a story about the colonisation/exploration of Mars interesting enough on its own and reached for stock science-fiction elements to fill the gap – amok robots, alien artifacts, evidence of microbial life.

The frustrating thing about The Last Days on Mars is that it starts out well. As we follow the crew packing up on the last day of their mission, the film gives us a solid and convincing, scientifically grounded depiction of life on the red planet. Ruairi Robinson does a fine job of showing the group’s interaction, their banter, the sense of them rubbing against one another, weary and ready to go home.

The great disappointment of the film is that after a great set-up, it then heads down entirely predictable paths and turns into yet another Alien (1979) copy. The main difference is that here there are no alien beings – we never go beyond an infection that causes people to become homicidal; at most produces a herd-like behaviour to want to spread itself. In fact, what we feels more like a zombie film set on Mars – even though The Last Days on Mars seems to assiduously avoid any desire to be pegged as a zombie film and clearly wants to labelled as hard science science-fiction.

With the basic premise let out of the bag, I settled into The Last Days on Mars and at least decided to go with what it was offering. As long as one buys into the premise, it makes a solid and reasonable film. Ruairi Robinson builds effective tension by developing it out around the characters and their reactions, the fight for survival, trying to solve the problems that each new development brings with it, betrayal by cowardly members of the expedition or those seeking to hide evidence of the infection. By the climactic scenes, with the race across the desert to the landing point, the film becomes quite suspenseful.

The Last Days on Mars was one of a spate of hard science films about near-space exploration that came out in the mid-2010s with Gravity (2013) and The Martian (2015). All of these feature space missions that could easily take place with current technology and are depicted with rigorous scientific regard (in comparison to most other science-fiction films). Moreover, they feature actors who better known for dramatic roles than any genre-identifying ones. It shows here in the way the actors elevate what could easily have been a routine B movie – you had dread feelings of The Last Days on Mars going the same way as something like the disastrous recent Stranded (2013), a similar work about alien infection – but instead emerges with modest effect.