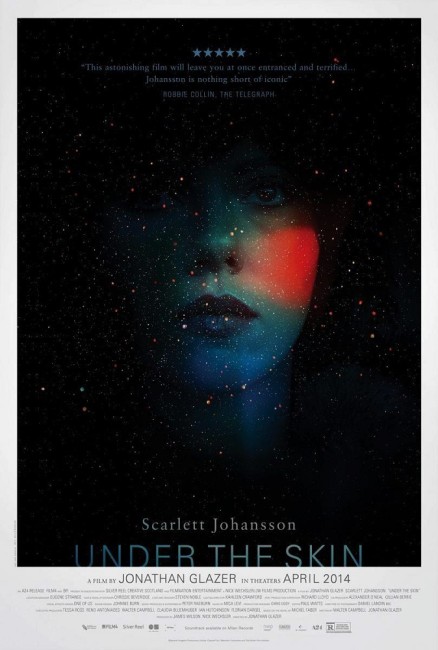 A mystery woman of alien origin takes the clothes of a dead woman and a van. Driving across Scotland, she stops and lures single men, taking them away and digesting their bodies. On her journey, she tries to come to an understanding of the nature of the human body that she inhabits.

Under the Skin is a film that has been lighting up the indie scene since its release at Telluride and a bunch of high-profile film festivals throughout 2013. Jonathan Glazer is a British director who emerged out of a series of acclaimed music videos for groups like Blur, Massive Attack, Nick Cave and Radiohead, among others. Glazer made his feature-length directorial debut with the sizzling Sexy Beast (2000) and then went onto the less well-received but excellent Birth (2004) with Nicole Kidman as a woman who meets a young boy who claims to be the reincarnation of her late husband.

More importantly, Under the Skin feels like a work where the scriptwriters have deliberately worked to pare it away from all trimmings, not just in terms of hardware but also in terms of explanations about what is happening. It is worth comparing the film to the book it is based on, Dutch author Michel Faber’s Whitbread-nominated novel Under the Skin (2000). In the book, Scarlett Johansson’s character is quite clearly an alien and the film follows her as she drives through Scotland, picking up male hitchhikers who are then slaughtered as meat, which is considered a delicacy on her home planet. The story concerns her slow development of empathy for the humans throughout her journey to the point of eventual rebellion against her task.

In the film though, it is not at all clear what Scarlett Johansson is up to – she lures men into a strange bare matte black space and walks away (usually in her underwear or naked) as behind her they slowly disappear into the floor and are swallowed up without a trace. However, what this black featureless space is is not clear – is it an actual physical space like somewhere aboard a spaceship or just an allegorical representation? Later she meets and decides to release one of the men, a guy with misshapen facial features, but why never find out why that is – whether he fails to meet the grade or whether she had pity on him.

In the background of the film, there are occasional cuts back to a group of men who seem to be pursuing or at least following her trail on motorcycles – but who these are and what they are doing is never clear from a reading of the film. Indeed, in the film, Scarlett Johansson (and everyone else in the cast) even comes without the benefit of the names they had in the book.

I have admired Jonathan Glazer’s other films – Sexy Beast, Birth. Under the Skin is something very different stylistically to these. The early sections resemble something of the films of Shane Meadows – Once Upon a Time in the Midlands (2002), This is England (2006) – and their ragged, raw and seemingly unrehearsed visions of parts of nowhere England – in fact, the sequences with Scarlett Johansson picking up men were shot live with her driving about in the van and approaching regular people on the street inside with everything being filmed with hidden cameras and they unaware until afterwards.

The latter scenes are set around Scarlett Johansson seemingly coming to understand the body she inhabits – vomiting after tasting food, her sudden shock at discovering she has a vagina when a man enters her in bed. Eventually we arrive at the remarkable ending where her true form is exposed, the revelation of which causes the audience to gasp.

All of this is very well filmed and Under the Skin is accruing accolades as a standout film. I remain slightly short of these. The opaqueness of the film – the lack of clear explanations and guesswork that surrounds almost everything that happens – makes it frustratingly indecipherable at times. I am all for films that leave explanations to be pieced together – in this respect, Under the Skin reminds much of The Man Who Fell to Earth (1976) – but I think it wouldn’t have hurt the film for Jonathan Glazer to have given us more in this regard.