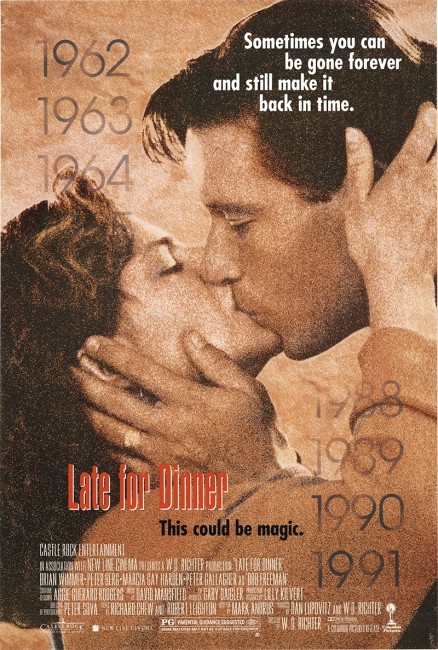 In 1962, the intellectually handicapped Frank Lovegren and his brother-in-law Willie Husband become fugitives from the law after a misunderstanding with a real estate developer that ends up with several people being shot in a scuffle. Fleeing to California, they meet cryonegenticist Dr Daniel Chilblains who offers them the chance to escape the electric chair by becoming his test subjects and allowing him to cryogenically freeze them. In 1991, they are revived when cables fall from a truck causing the freezer equipment to short circuit. Finding themselves in a bewildering modern-day world, Willie tries to reunite with his wife, only to find she is now an old woman.

Following the twin successes of The Terminator (1984) and Back to the Future (1985), the time travel genre blossomed with a maturity on the screen in the 1980s. Previously cinematic time travel had operated as little more than exotic variant on an adventure film with travellers moving in a straight line to adventures in distant futures or arriving as outsiders in the present-day. Soon little touched-upon time travel themes began to appear including the alternate history story – Fatherland (1994); the paratime police theme – Timecop (1994); the editing of the present and future (most films in the genre); the time loop theme – Groundhog Day (1993), 12:01 PM (1993); the time paradox – Twelve Monkeys (1995); and the Sleeper Awakes theme as in Late for Dinner and Forever Young (1992). One of the predominating themes of this time travel boom was an obsession with personal memory and recreating the past. Thus these two Sleeper Awakes variations have less to do with the mode of time travel (here the cryogenic process is quickly glossed over) and coming to terms with the new future the traveller(s) encounter, than they are romantic Rip Van Winkle variants.

Late for Dinner and Forever Young both came out around the same time and are very similar films. Both are almost identical films in terms of plot, yet were completely different in terms of their success. Forever Young is wholly melodramatic, most notably an absurd plot device that allows its lovers to get together at the end; on the other hand, Late for Dinner is low key and attempts to come to terms with its two lovers being 35 years apart in age without copping out on the difficulties this presents. Naturally enough, Forever Young, which was stupid but had Mel Gibson, was a big success, while Late for Dinner, which was intelligent and far more low-key, but had no name stars, was hardly noticed.

Late for Dinner is admirable in its cosy modesty. The scenes of the two characters coming to terms with contemporary society are conducted with a completely convincing degree of understated naturalism – they puzzling over and trying to understand things like cell phones, rappers, vans with built-in elevators, the variety of inventive new burgers a fast food joint can offer, an ATM – “there’s money in that wall, Willie.” The scene with Brian Wimmer encountering an African-American doctor – “it took a hundred National Guardsmen to get one Black kid to school, how many did it take to make you a doctor?” – is surprisingly thoughtful.

The romantic scenes with Brian Wimmer trying to convince Marcia Gay Harden to come back to him are very touching. Everyone plays well, especially Peter Berg who makes Frank’s intellectual handicap a source of both warm amusement and emotion. Peter Gallagher has clear fun chewing scenery as the property developer.

Director W.D. Richter has also made a number of other genre films. He also directed the cult The Adventures of Buckaroo Banzai: Across the Eighth Dimension (1984) and scripted Philip Kaufman’s remake of Invasion of the Body Snatchers (1978), the Frank Langella Dracula (1979), John Carpenter’s Big Trouble in Little China (1986), the Stephen King adaptation Needful Things (1993) and the action film Stealth (2005).