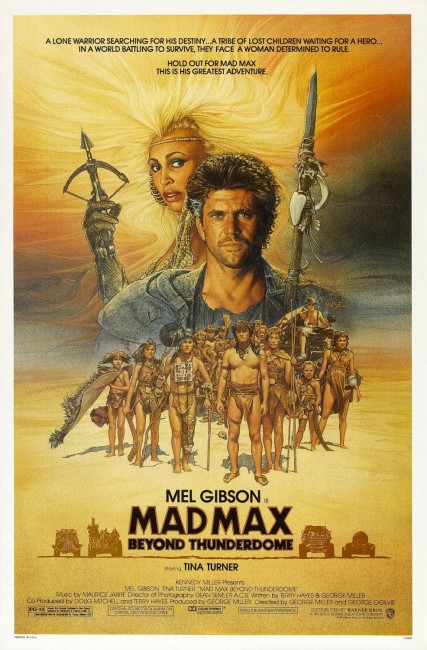 Max’s camel-train is hijacked and stolen as he travels through the desert. Max makes his way to the nearby mercantile settlement of Bartertown where he trades his combat skills in return for being allowed to search for his camel. He is hired by Auntie Entity, the head of the Bartertown, who wants him to eliminate The Master-Blaster, a dwarf and his hulking brute of a servant who maintain a stranglehold over her with their control of the town’s methane-based fuel system. Max fabricates an opportunity to pick a fight and take on Blaster in the town’s combat arena The Thunderdome. Max succeeds in defeating Blaster but refuses to kill him when he finds that Blaster only has the mind of a child. For failing to complete their agreement, Auntie Entity banishes Max into the desert. There Max is found by a group of children who have been abandoned in a valley by their parents following a plane crash. The children see Max as their mythic saviour, the plane’s pilot Captain Walker, and believe that he has returned to deliver them to the promised Tomorrowland.

Mad Max Beyond Thunderdome was the third of the Mad Max films. The first film Mad Max (1979) was a violent, nihilistic revenge drama that found a modest cult audience, while the second Mad Max 2/The Road Warrior (1981) had been a runaway international hit and inspired the entire genre of post-holocaust action films. Mad Max Beyond Thunderdome was the third and so far final film in the series, although there have been persistent rumours of a fourth film since the 1990s, which finally emerge after thirty years with the astonishing Mad Max: Fury Road (2015). While the other two films were independently made in Australia, Mad Max Beyond Thunderdome was the first of the series to be made as an A-budget mainstream film, financed by a Hollywood studio and to import American names as stars.

Certainly, by the point of Mad Max Beyond Thunderdome, there is an enormous difference between what the Mad Max films had originally started out as and where they have ended up. In the above-listed review for Mad Max, I recount how the film was originally banned in New Zealand and then released a few years later with an R18 Rating, the equivalent of a US X Certificate. Mad Max 2 came out with an R16 (an R-rating in the US), while Mad Max Beyond Thunderdome by comparison came with a GY certificate (the equivalent of the US PG-rating).

In tone, the Mad Max films had become progressively more mainstream – Mad Max was an ultra-violent vigilante drama, Mad Max 2 became a kinetic comic-book of an action film and by the time of Mad Max Beyond Thunderdome, director George Miller has perhaps recognised that much of his audience was in the teenage bracket and toned the violence down considerably. Indeed, with the plot here turning Max into the destined saviour herding a group of lost kids to safety, there are times that Mad Max Beyond Thunderdome does not seem too far removed from being a Steven Spielberg movie set in the aftermath of a holocaust.

Mad Max 2 was arguably the most exhilarating action movie of its decade. Mad Max Beyond Thunderdome is left in the unenviable position of having to try and top that. Thus the junkyard chic sets and costumes of the last film are replicated on a big budget – although this tends to over-ornament them in a way that seems like overkill. This time George Miller, the director of the other two entries, has brought in another director George Ogilvie to share the directing chores – Miller concentrated on the action scenes, while George Ogilvie handled the people scenes.

There seems the conscious resignation that Mad Max 2 could not have been topped and, as a result, George Miller directs more in the way of non-vehicular action sequences – the best of these being the Thunderdome sequences, which consists of combat between gladiators bouncing around inside a cage on bungee cords. While the car chase sequences here are fun, they lack the exhilarating kinesis of the climactic sequence in Mad Max 2 and often seem to be more interested in trying to introduce novelty vehicles and stunts than maintaining a breakneck pace.

George Miller’s characteristically eccentric sense of humour occasionally shows through – the kid with the Bugs Bunny doll going “Ehh, what’s up Doc?” as though it were a ritual, or the presence of a driver dressed as the Lone Ranger during the big climactic chase, and the highly amusing moment where the kids bring out the photo of Captain Walker and then produce a postcard of a Gold Coast stripper and introduce her as “Mrs Walker.”

There is also something unsatisfying to the story. The ending in particular comes to a halt, suddenly slamming its brakes on, leaving the story seemingly only three-quarters finished and on a downbeat note with the villainness winning and the hero left abandoned in the desert. What Mad Max Beyond Thunderdome needed and is noticeably lacking is a big triumphant climax like Mad Max 2 had.

In conception, the scenes with the kids sound like a drastic curtailment of the nihilistic, comic-book punk ethos that drove the other two Mad Max films, as though George Miller had suddenly gone soft-headed. In actuality, the scenes with the children are the best in the film. They come directed with both a plaintive and a satirical edge, while underscored by a self-conscious mythological resonance that turns this part of the film something along the lines of William Golding’s Lord of the Flies (1954) – see the film versions Lord of the Flies (1963) and Lord of the Flies (1990). The scenes with the kids and their degenerated language and half-grasped mythic sense of the past have something fascinating and genuinely science-fictional to them. The film is almost worth the price of admission alone for the beautiful dream-like epilogue with its images of the ruins of the Sydney Opera House and the ends of the broken Sydney Harbour Bridge hanging out over a dried riverbed.

With the exception of a flat reading by Tina Turner, the cast manages to nicely tune the broad camp playing. The only returnee from the other films (aside from Mel Gibson) is Bruce Spence’s balmy Gyro Captain, although it is never made clear if this is the same character we saw in the previous film or not. Maurice Jarre delivers a fine score, his use of saxophone adding an unexpectedly soft and expansive side to the film.