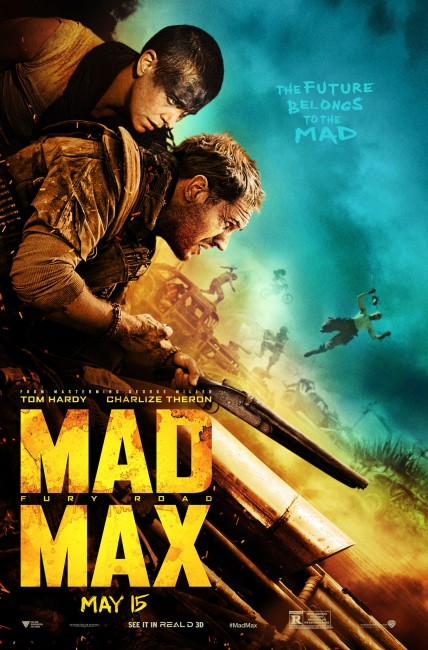 Max has been captured by the War Boys, the warriors of Immortam Joe who has built a cult around himself and the supplies of water he guards in his Citadel. Max is designated a universal blood donor and made into a ‘blood bag’ where he connected by a tube to sustain the War Boy Nux. One of Joe’s imperators Furiosa sets out to drive a war rig to nearby Gas Town ostensibly to collect supplies, but instead diverts off into the desert. When Joe realises that she has liberated five of his Wives, girls that have been selected for their unpolluted breeding capabilities, he sets off in pursuit with the War Boys. Max is chained to the front of Nux’s vehicle. However, Furiosa drives her convoy into the midst of a massive sandstorm and most of the vehicles are wrecked. Max cuts free his chains and attempts to steal the rig but is forced to cooperate with Furiosa who has a kill switch on the vehicle. A slow trust grows between the two of them as they try to avoid determined pursuit by Joe and the other marauders along Fury Road so that Furiosa can guide the freed wives to the mythical Green Place.

Mad Max 2 (1981) is one of the cornerstones of modern action cinema. Its adrenaline-charged climactic pursuit is something that no action movie ever managed to come anywhere near in terms of excitement for the next few years. It redefined the Post-Apocalyptic Film and set off a junkyard chic and leather fetish fashion that became highly influential on an entire genre of science-fiction films throughout the 1980s.

Director George Miller has earlier begun the saga with Max Max (1979), which was more of a 1970s revenge saga than the science-fiction spectacle the sequels became but even on the ragged budget he had, Miller’s adrenalised, pure comic-book style was readily apparent. After the worldwide success of Mad Max 2, Miller went onto co-direct Mad Max Beyond Thunderdome (1985), which was a mixed follow-up nevertheless is a work that has many admirable qualities to it, even if it lacks the wall-to-wall action sequences its predecessor had.

Thereafter, George Miller’s directorial output becomes uneven. He went to Hollywood to make Nightmare at 30,000 Feet, the standout segment of Twilight Zone – The Movie (1983) and then the immensely enjoyable The Witches of Eastwick (1987), which proved a major headache for him in dealing with studios after which he returned to Australia. Miller’s career in the 1990s flagged somewhat with the boringly respectable Lorenzo’s Oil (1992) and the throwaway sequel Babe: Pig in the City (1998).

During the 1990s/early 2000s, Miller became known more for the film’s he didn’t direct than those he did – his signing on as the original director of Contact (1997) and being dropped, the aborted production of a Justice League film during the early 2000s, and as producer of the award-winning Babe (1995), which ended in bitter argument with listed director Chris Noonan over who had directed it with Noonan accusing Miller of taking all the credit during the publicity tour. Miller did however make a fun return to the director’s chair with the enjoyable performance-capture animated Happy Feet (2006) about tap-dancing penguins, which proved to be a hit, and its more formulaic sequel Happy Feet Two (2011). Certainly, Miller’s name did pick up considerably after the acclaim afforded to Happy Feet and he went on to great acclaim with this and the subequent Three Thousand Years of Longing (2022).

Mad Max: Fury Road has been a project that has been gestating for thirty years. This must be some kind of record for the length of time a creator has taken between delivering entries in their own series – it was sixteen years between George Lucas delivering Return of the Jedi (1983) and Star Wars Episode I: The Phantom Menace (1999) and nineteen years between Lucas and Spielberg making Indiana Jones and the Last Crusade (1989) and Indiana Jones and the Kingdom of the Crystal Skull (2008), while Dario Argento previously held the record with twenty-seven years between Inferno (1980) and completing his Three Mothers trilogy with Mother of Tears: The Third Mother (2007).

To put this in perspective, neither of this film’s two stars, Tom Hardy and Charlize Theron, were even in high-school when the last Mad Max film was out on cinema screens. CGI had not even been invented then and the 3D process that this film comes in was no more than a novelty gimmick used by a handful of tatty B-budget films. Mad Max 4 was in perpetual development hell during that time, being announced as an on-project every few years since 1985 and at one point even being considered as a tv series. This current incarnation has been in the works since 1998 and was cancelled several times, with the proposed Namibian shoot being shut down over safety concerns following the outbreak of the Iraq War, after which Mel Gibson bowed out.

George Miller’s uneven output since the 1990s left some question mark over Mad Max: Fury Road before sitting down to watch it. All I can say is one should not have given into doubt. Even as he hits 70 the year the film came out, Miller still shows he has the adrenalin-charged mojo he did as a young upstart in his early thirties – something that could not be said of George Lucas and Dario Argento when they made a return to their respective series to universal disappointment. The entirety of Fury Road has been conceived as a single action sequence without pause. According to those involved in the production, the film didn’t have a script so much as a storyboard for the chase sequences. The result is one of the most foot-to-the-floor and downright astonishing action films of recent years. I have seen several comments around the web that call Fury Road a work of art and would have to add my voice to them – it is the action way beyond anything we have seen before and conceived as pure visual artistry of the medium.

Miller kicks the film in with an extraordinary sequence with the vehicles pursuing each other out into the desert in a helter-skelter race before disappearing into a vast dust storm. This first sequence alone tops Mad Max 2 and the film keeps going from there. The custom-built vehicles – Charlize Theron driving a tanker truck with a car as a built-up cab and another as a gun turret on the rear; cars with massive monster truck wheels; other vehicles built with fifty foot poles for people to dangle from and attack other vehicles in mid-pursuit; car carriers transformed into armoured rigs; one entire truck that has a massive set of speakers with a guitarist with strung up in chains pounding out the soundtrack to the chase on a flame-belching electric guitar and another truck with War Boys banging massive taiko drums; even beetle cars with armoured spikes where Miller seems to be paying homage to the earlier Aussie car movie The Cars That Ate Paris (1974) – are something utterly wild.

The background conjured is so fantastical as to be out of this world, while the massively scaled storm sequence with vehicles flying up into the maw becomes utterly phantasmagoric. This is a film that regards a quiet interlude as the vehicle getting stuck in mud. What makes the film work even more is that George Miller has determined to deliver all the car effects and stunts physically – apart from a handful of CGI shots – and the results show, instantly blowing any contemporary equivalent like the Fast and the Furious and Transformers films out of the water.

There is the same mix of adrenalin-fuelled excitement and gonzo background humour as the other films – I’ve always thought that Miller’s original influence had been theJudge Dredd comic-book and here he even co-writes the film with Brendan McCarthy, a comic-book artist/writer who had worked on Dredd. The film’s casual background detail and dressing is a mini-masterpiece – hand-carved steering wheels, gearsticks that house daggers, characters with shotgun shells for teeth fillings, Joe’s stronghold with hundreds of child slaves like hamsters moving giant wooden wheels to raise and lower platform elevators, even tiny little throwaway background shots like the journey through the marshes where we see the dwellers of the region passing on stilts. Equally Miller gets the sense of the mythic – of characters marvelling at the world that we are familiar with – in ways that the latter half of Thunderdome did so well.

You could complain that the film has been stripped so that it is all action sequence and with little plot – but then that is a complaint you would also have to make of Mad Max 2. What I would have liked to have seen more of is the background of The Citadel and Immortan Joe’s world – the suggestions that humanity has started to become infertile, why characters need constant blood injections, why they spray their lips with chromium, or even the origin of the potent image where the War Boys select personally carved driving wheels from an apparent shrine. What this does not detract from is what is already the most extraordinary film of the year, one that seems so adrenaline-charged, that exists in a world so beyond everything that has gone before that it is astonishing in almost every regard.

There are some mixed aspects. Tom Hardy has shown he is a major rising acting name in the last few years. He is certainly capable of a far greater range than Mel Gibson ever was. And yet, even though Hardy makes a point of getting an Australian accent, his Max seems stripped to a stupefied, monosyllabic brute. The total number of lines that Max gets to speak throughout the film would probably be counted on your fingers and none of them seem to ever amount to a sentence of more than half-a-dozen words. On the other hand, Mel Gibson’s Max was a much more engaging character – Gibson had a tight-lipped determination in the best Clint Eastwood tradition balanced with a wry wit. By contrast, Tom Hardy seems quite a few IQ points down the evolutionary chain and a lot less in terms of screen charisma. The irony of Fury Road is that it engages strong actors like Tom Hardy and Charlize Theron and strips their characters away to the point they are almost primal caricatures.

The other minor niggle that remained is where Fury Road sits in continuity to the other Mad Max films. It clearly comes after Mad Max 2 as we see Max’s Interceptor trashed in the montage at the start of the film and presumably before Beyond Thunderdome where Tom Hardy looks a whole lot younger than the greying Mel Gibson we saw there. That said, George Miller has stated that he regards Max more as a James Bond character so this might negate any attempts to create continuity. The only holdover from any of the other films is Hugh Keays-Byrne who played the gang leader Toecutter in the original Mad Max – Toecutter was killed in that film and it should be pointed out (some people on various message boards are confused by the issue) that his character here is a completely different one.

George Miller has announced a further sequel Furiosa for some time in the 2020s. We later saw the film invaded by Looney Tunes in Space Jam: A New Legacy (2021)