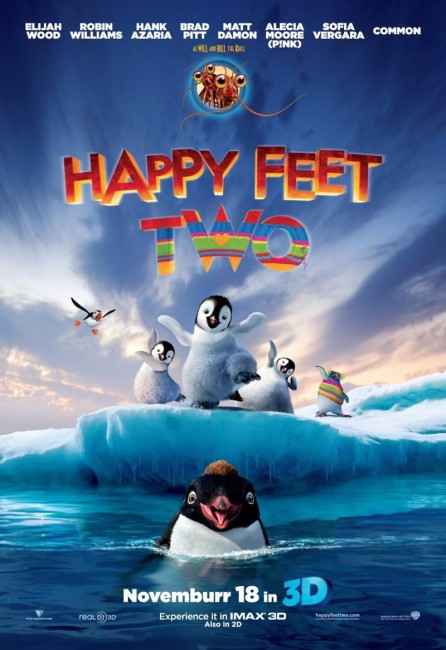 Mumble now has a son Erik. After an attempt to dance goes wrong, Erik feels humiliated and he and several friends sets out on their own. Mumble goes to get them back, not before they encounter the penguin Sven who has become a guru among the other penguin colonies because he can fly and promises to teach them how to do so. Erik determines to learn to fly. Returning, they find that while have been gone an ice shelf has collapsed, walling Emperor Land off inside a valley. It is up to Mumble, Ramon and the others to find a means to help the penguins trapped below to escape.

Australia’s George Miller may be one of the great underachievers in contemporary cinema. Miller is the man who gave the world Mad Max – making a fierce debut with Mad Max (1979), then creating an entire action sub-genre with the exhilaratingly revved Mad Max 2 (1981) and completing a solid third entry with Mad Max Beyond Thunderdome (1985). The 1980s showed George Miller as a director of immense promise – outside of the Mad Max trilogy, he also delivered the immensely enjoyable witchcraft comedy The Witches of Eastwick (1987). Heck, this is the man that signed onto one of the segments in Twilight Zone – The Movie (1983) and, despite being the new kid on the block, delivered an episode that stole the show out from under no less than Steven Spielberg, Joe Dante and John Landis.

After production difficulties on The Witches of Eastwick, George Miller left a burgeoning Hollywood career and retreated back to Australia – and then seemed to vanish, apart from odd efforts such as lending his name as producer to Dead Calm (1989) or directing Lorenzo’s Oil (1992), a true-life drama about the search for a miracle cure drug, and occasional tv producing work. Indeed, aside from those mentioned in the next paragraph, Miller may well be more for the films he did not direct than those he did – Contact (1997), which he signed onto but ended up dragging his feet for so long that he was fired and replaced by Robert Zemeckis; the perpetually announced the perpetually announced fourth Mad Max film that dragged on for thirty years; a planned film based on DC’s Justice League superhero team, which went so far as to be cast in 2007 but was eventually cancelled; as well as a version of Homer’s The Odyssey.

Outside of these, George Miller’s legacy of the 1990s and 2010s might simply be as a Robert Zemeckis Lite. Miller produced Babe (1995), which was a considerable hit and created a technical revolution by using CGI and animatronics to conduct a talking animals film in live-action. This purportedly ended in acrimony between producer George Miller and director Chris Noonan who accused Miller of trying to take the credit for the film away from him. Miller took the director’s chair and Noonan was nowhere to be seen when it came to the lesser sequel Babe: Pig in the City (1998). Certainly, Miller’s name did pick up considerably after the acclaim afforded to Happy Feet and he went on to works like Mad Max: Fury Road (2015) and Three Thousand Years of Longing (2022).

The one bona fide hit that George Miller has had since 1987 in which he can claim principal credit however was Happy Feet (2006), which served to remind people that Miller could still be a vital force. Miller smartly adapted the performance capture processes that animation had just started to discover a couple of years before and threw in an off-the-wall premise about tap-dancing penguins to charm much of the world – Happy Feet even netted an Academy Award as Best Animated Film.

Five years later, George Miller returned with a Happy Feet sequel here. A reasonable number of the original creative team are again present, along with many of the original voice cast, including leads Elijah Wood and Robin Williams, with support from the likes of Hugo Weaving and Magda Szubanski. Some of the more high-profile names such as Hugh Jackman and Nicole Kidman have departed – Happy Feet Two is not longer such an Australian-centric production as the original was with the inclusion of a number of imported US actors and rappers among the voice cast, including no less than Brad Pitt and Matt Damon as a duo of comic-relief krills. Brittany Murphy, who voiced the female romantic interest in the original, died in 2009 and is replaced by Alecia Moore alias the pop singer Pink (or P!nk as the credits would have it).

Happy Feet Two suffers from the problem that every sequel does. Happy Feet won audiences over because of its uniquely original premise. Simply in being a sequel, Happy Feet Two lacks that uniqueness and is left appealing to audiences who enjoyed the original to come back for more. I must admit to being thoroughly switched off by a ghastly trailer that gave us rapping penguins and it took me some time in to warm up to the film itself. Moreover, the first half of the film seems to have too many competing elements with new characters being introduced and old characters getting their own arcs that it becomes frustrating in between all of these competing plot lines trying to figure out where the story was going.

The premise is now that Mumble has grown up and become a parent. This is something that killed several of the Disney sequels of the 00s – see in particular Lady and the Tramp II: Scamp’s Adventure (2001). It serves to affect a fundamental change in the central character – here Mumble goes from being a tiny anthropomorphic child-like character who leaves the colony and sets out into the wider world to discover what is truly in his heart to a parent who has settled down and nervously hovers over his son, offering cautious encouragements mixed with warnings of the danger that the world beyond holds. At one point, Mumble even admonishes his son for having a dream in which penguins can fly by harshly denying any possibility that they can. The extremes between which the two films take their central character – from a child wanting to find his dream that everybody else ridicules to a disapproving parent abruptly cutting off his own son’s dream – is remarkable.

It also feels that in its search for a story of its own, Happy Feet Two has fallen back on too much of the formula of the modern animated film. The plot of trying to escape from a valley in the aftermath of a natural disaster feels like it has served for at least two of the Ice Age films; similarly the krills serve the same function as Scrat does in the Ice Age films, as comic-relief supporting characters with their own B-plot unrelated to the main action that the film keeps flipping back to; while Bill the Krill’s quest for individuality apart from the school is not dissimilar to the lead character in Antz (1998); and The Mighty Sven, the artful conman who tries to inspire the penguins that they can fly, reminds far too much of Mel Gibson’s Rocky in Chicken Run (2000).

Happy Feet Two does eventually find its small charms – especially the comic-relief duo of the krills and Richard Carter as the gruff-voiced walrus. This time the soundtrack and dance routines prove surprisingly unmemorable for the most part, although there is eventually one show-stopper where Erik stands up to sing in front of the walrus in a tiny child’s voice that is quite lovely. Happy Feet Two is perfectly enjoyable family fare, even if it is not up there with the first film. Still, you feel that George Miller is merely recycling material and batting well below what he is more than capable of doing.