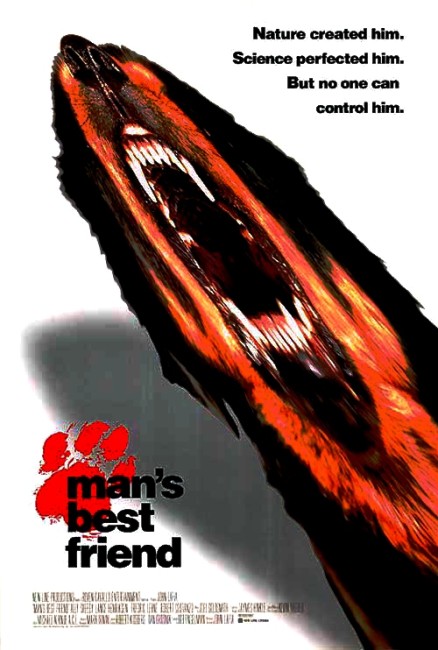 TV journalist Lori Tanner breaks into E-Max Laboratories in search of evidence of vivisection experiments being conducted there. One of the experimental dogs, Max, breaks out and jumps into her car. She decides to adopt Max and is amazed at the intelligence that he displays, while he becomes highly protective of her. Unknown to her, Max kills those who threaten Lori and himself, including biting through the brake linings of her boyfriend’s car. Meanwhile, E-Max chief Dr Robert Jarrett makes all effort to find Max. Max is in fact an experimental guard dog who has been genetically crossbred from other animal DNA for superior eyesight, strength and even chameleon abilities. However, if the drugs wear off before Jarrett finds him, Max will become a mad killer.

Man’s Best Friend was made as a clear copy of Watchers (1988), although it was a bigger-budgeted film and received wider release than Watchers did. It is also one of the most ridiculous sf/horror films that one has seen in some time. The director and screenwriter is John Lafia whose previous offering was Child’s Play 2 (1990).

The film is almost like a Friday the 13th sequel with a killer dog instead of a maniac in a hockey mask. Every set-up is staggeringly predictable. This is one of those nastily moralistic horror films where every victim has their fate stamped on their forehead and is made to deserve their death – the paperboy gets it because he throws a paper and laughs when it hits the dog; the postie gets his leg bitten off because he is defends himself against dogs with pepper spray; William Sanderson is a sadist who tortures the tied-up dog with a blowtorch; and the heroine’s boyfriend Frederic Lehne is conceited.

The film quickly collapses into the laughable. None more so than the scenes where the dog chases a cat up a tree then devours it whole, or where the boyfriend finds that the dog has attempted to kill him by biting through his brake cable. In a touch of side-splitting absurdity, the dog’s urine melt fire hydrants – the boyfriend is dispatched by having the dog piss in his face, which must be some sort of filmic first. Then there is the dog’s romantic romp with the neighbouring bitch Heidi, which the film even more hysterically tries to direct as the canine equivalent of a romantic scene, all accompanied by the song Puppy Love.

Man’s Best Friend clearly has no idea of what it is talking about when it gets to genetic engineering. It seems to regard tree-climbing and chameleon changing as instant abilities that one can just snip from another animal and graft onto dog genes. In actuality, the reason that cats are able to climb trees and dogs can not is because of the musculature in their legs and the relative lightness of weight – dogs are unable to climb trees because they are unable to carry their own weight on their front paws.

The film stars Ally Sheedy, a former Brat Packer who by this point was struggling to find some sort of career after she became too old to play in preppie dramas. There is still a girlish cuteness in the way Sheedy plays – she gives the impression of a twentysomething flake who needs to come down to Earth. She is playing here almost the same role that she played in the runaway cute robot comedy Short Circuit (1986). What she needs is a solid dramatic role, something to break her image, although one doubts that Sheedy has the acting ability to carry it off. [She did sort of later in High Art (1998)]. The reliable face amid the silliness is Lance Henriksen who gives the role a seriousness that the production does not deserve.